What kinds of chickadees can you find in Missouri?

Thanks to their bold and inquisitive personalities, chickadees are one of the most popular birds that visit backyard feeding stations. I love watching them fly in quickly to grab a seed and then immediately fly away to eat in private (or store for later)!

In Missouri, you can find 2 different kinds of chickadees.

Below you will learn more about each species AND how to identify them by sight OR sound. Make sure to pay attention to the range maps to see which chickadees live near you!

To learn more about birds in Missouri, check out these other guides:

Chickadees That Live in Missouri(2)

Black-capped Chickadees are one of the most beloved birds in Missouri, and it’s easy to see why! These birds are often described as “cute,” as they are tiny, with an oversized head that features a black cap and bib.

Naturally, look for Black-capped Chickadees in Missouri in open deciduous forests, thickets, and cottonwood groves. They also adapt easily to the presence of people and are common to see in backyards and parks.

Black-capped Chickadees are easy to attract to bird feeders!

Press PLAY above to watch a Black-capped Chickadee on my feeders!

In fact, once you set up a new bird feeder, they will likely be the first birds to visit, as they are curious about anything new in their territory. The best foods to use include sunflower, peanuts, and suet. Their small size and athletic ability mean these birds can use just about any type of feeder!

Another great way to attract chickadees is to install appropriately sized nesting boxes around your yard. These birds are cavity nesters, which means they need an enclosed bird house to raise their young.

Here are some tips to consider before hanging up a chickadee nesting box: 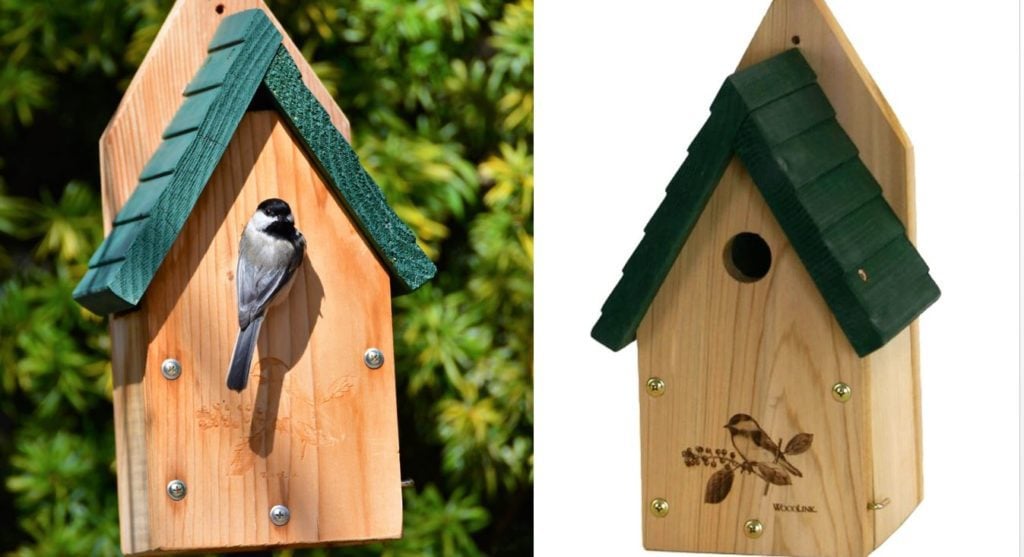 You can either build a nest box yourself or buy a pre-made chickadee house online.

These birds are extremely vocal, and you should have no problem hearing one. And luckily, their vocalizations are unique and relatively easy to identify. (Press PLAY below!)

Listen for a song that is a simple 2 or 3 note whistle, which sounds like it’s saying “fee-bee” or “hey sweetie.”

Black-capped Chickadees also make a distinctive “chickadee-dee-dee” call. And yes, it actually sounds like they are saying their name! Interestingly, they add more “dee” notes onto the end of the call when alarmed.

Lastly, these birds have incredible memories! They hide seeds and other foods in their territory to eat later, which are all hidden separately. Somehow, their brains can remember THOUSANDS of different hiding places!

Carolina Chickadees are small birds with a distinctive black cap and bib, dull white cheeks, a gray back, and white underparts. Both males and females look the same.

Look for them in a wide variety of habitats across the southeast. You should be able to spot Carolina Chickadees in Missouri in deciduous and mixed woodlands and swampy areas. They also adapt well to humans and are extremely common in parks and suburban and urban backyards!

What sounds do Carolina Chickadees make?

Press PLAY above to hear a Carolina Chickadee!

The most common song you will hear them making is a four-note whistle, which sounds like “fee-bee-fee-bay.” Typically, the first and third notes are higher in pitch than the second and fourth.

They also have a call that sounds like they are saying their name “chick-a-dee-dee.” (Press PLAY Above!)

How can you tell Carolina and Black-capped Chickadees apart?

If you hadn’t noticed, these two birds look almost identical! Trying to tell them apart takes a lot of practice, but it can be done. Here are the best ways to identify each bird:

For the most part, these two birds don’t live in the same areas. Carolina Chickadees are birds of the southeast, while Black-capped Chickadees live more north. But, there is some range overlap between the two species, in which case you will need to rely upon another indicator.

At first glance, these two birds appear identical. But believe it or not, there are some small differences in the way they look. A Carolina Chickadee’s wings are darker and grayer. Black-capped Chickadees have white on the wing edges.

Vocalizations aren’t a ton of help where the ranges meet since each species can learn the other’s songs! The only clue you may have is that Carolina Chickadees tend to say “chick-a-dee-dee-dee” faster than Black-capped Chickadees. With a lot of practice, you may be able to tell the difference!

Which chickadees have you seen before in Missouri?

The range maps below were generously shared with permission from The Birds of The World, published by the Cornell Lab of Ornithology. I use their site OFTEN to learn new information about birds!