See what I did there?

Owls are intriguing creatures that easily capture the interest and attention of everyone, including kids and non-birders. These mysterious and wise-looking birds are unique and have many secrets that most people don’t know!

Today, you will learn 15 facts about owls that will make your head spin!

And yes, that was another owl pun. 🙂

Fact #1: There are HUNDREDS of different types of owls!

There are well over 200 species of Owls, which are broken down into two families.

Owls belong to either the “Typical” owl family or the “Barn Owl” Family.

You can tell them apart because “Typical Owls” (also known as “True Owls”, have the famous round clock face created by the pattern of feathers. “Barn Owls,“ on the other hand, have a heart-shaped design of face feathers.

So which family is more common?

By far, the “Typical Owl” family is more prevalent and includes about 220 known species. The “Barn Owl” family has only 18.

I know that makes no sense, but please read this entire section because it explains why and how owls can move their head almost 360 degrees!

So, owls do not have round eyes like a human. Instead, they are long and shaped like a tube!

Because of this tubular shape,

Owls aren’t able to move their eyes to see at all!

And the fact that owls can’t move their eyes is the reason they have evolved to turn their heads 270 degrees and almost upside-down (without moving the rest of their body) to see in all different directions!

Their eyes aren’t useless, however!

The unique shape gives these birds better depth perception and allows them to see prey from much greater distances!

The depth of their eyes has another interesting side effect: If you look in an owls ears, you can see the bottom of their tubular eye!

Owls were doing just fine until Harry Potter came along, but the movies and books helped shine a light on the many unique owl species that exist on Planet Earth. 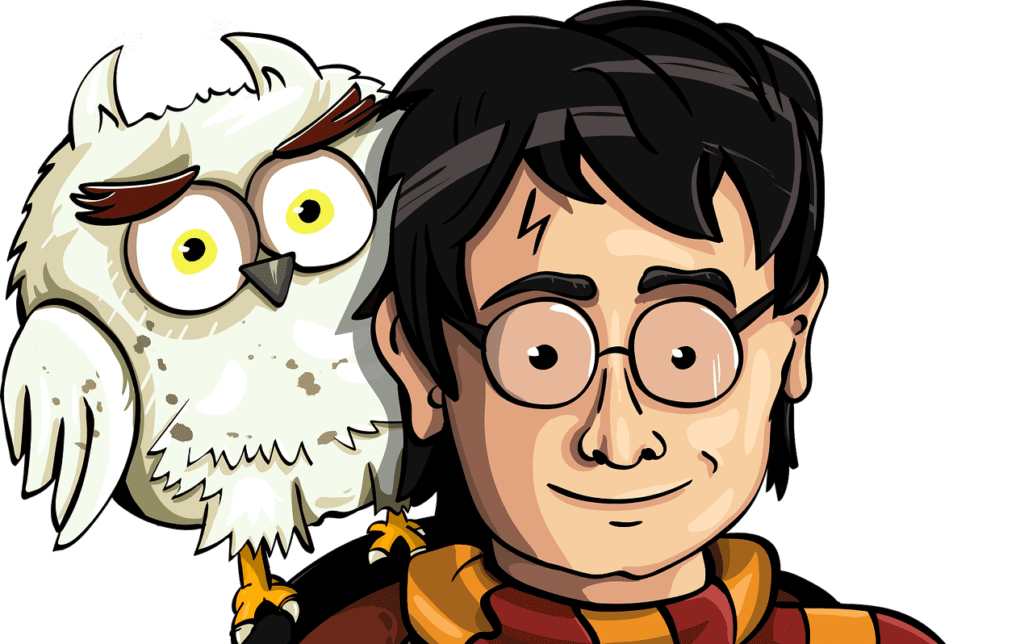 In case you are not aware, in the Harry Potter series, owls did all sorts of things. Owls served as a form of communication, delivering letters and messages, but were also considered pets and friends.

Here are some of the different owl species that made appearances!

Hit the “PLAY” button below to hear a short, 2-minute podcast from BirdNote about the Harry Potter owls!

And no, that was not a misprint. I meant to type “irruption,” not “eruption.”

Snowy Owls have odd migration patterns, and about every 4-5 years, high numbers of owls fly south MUCH farther than usual.

These winter invasions are called “irruptions,” and when it happens, it’s common to see Snowy Owls all over the continental United States. Some owls have even made it as far as Texas, Florida, and Bermuda!

Scientists think it has something to do with food and babies. It seems that during irruption years, lemming populations boomed up on the northern tundra during summer, which meant there was plenty of food for most young Snowy Owl’s to survive.

Then during the winter months, all these young Snowy Owls needed to find food, so they all flew south!

Not only do owls have tubular eyes, but their eye color also gives insight into their dietary habits!

For most species of owls, the color of their eyes can tell you whether that bird prefers to hunt during the day or at night.

Here’s what the colors mean:

Asymmetrical means that owls’ ears are not located at the same spot on each side of their head!

Not only are they located in different positions, but the ears themselves can be two different sizes! And don’t worry, hawks and other birds don’t make fun of owls for their funny ears!

The different sizes and different positions give owls the ability to pinpoint where prey is located, even if they don’t see it!

When a mouse or other animal makes a noise, the owl will receive that sound at two different times due to their asymmetrical ears. Their brains can calculate the exact location of the animal for the owl to get dinner!

Fact #7: Guess what groups of owls are called?

Owls are generally solitary creatures, but when they group together, it’s called a “Parliament.”

How did they get this name?

Well, owls have long been considered wise, especially when a bunch of them are together. Even in Greek mythology, owls were the symbol for Athena, who was the Goddess of Wisdom.

Fact #8: Owls are SILENT when flying!

Owls are ambush hunters, unlike their bird cousins (eagles and falcons), which rely on extreme speed.

While Falcons have been seen to attain speeds of 200 mph while diving to attack, owls can cruise by slow enough to have a conversation, usually under 40 mph. Although they aren’t fast, they have perfected the art of sneaking up on their prey.

So how do owls fly so quietly?

First, owls have enormous wings compared to their body size. These broad wings give incredible lift, so they flap less frequently, which makes less noise, and gives them a slow cruising speed.

Second, owl feathers are velvety thick and soft, absorbing a lot of the sound of their flight.

Third, an owl’s primary feathers (the wing feathers that stick out like fingers) have an edge that looks like a comb, which breaks the whoosh of each flap into hundreds of tinier whooshes.

Is there a downside to the above adaptions?

Yes! Owls, can’t fly in the rain very long. To be silent, they don’t have the natural waterproofing that other birds have on their feathers. If they get wet, they have to wait until they are dry enough to fly again.

Most birds can not chew their food, and owls are no exception. When an owl catches its prey, it will swallow the animal whole.

However, unlike other birds, owls do not have a crop, an organ that is used as a holding tank for food to be digested later. An owls food goes straight to the gizzard, which is an organ that uses digestive fluid to break down animal matter.

Unfortunately for owls, they have weak stomach acid that cannot digest bones, fur, or feathers. These birds will then vomit pellets full of these leftovers.

However, it does makes it easy to monitor their diet and general health! If you disassemble a pellet, chances are you would have a complete set of bones to build a mouse skeleton!

I remember trying to put together one of these balls of mice that came from an owl while in grade school. I had no idea I was touching owl vomit!

Although owls mate for life, Barn Owls divorce about 25% of the time.

The reasoning is not to acquire a more attractive mate, but rather one with which they are more compatible.

Divorced males will often settle for a less attractive partner, develop a much better relationship, and raise bigger families.  Divorced females will not accept “uglier” males, and so may spend more time searching.

The females usually leave when they decide it’s time for a change.  Pairs identify when it’s time to split by making fewer and fewer eggs per brood.

The good news for males is that they get the house—they typically will stay at the original breeding site.

The divorce rate in the U.S. is around 40 percent, so I guess owls aren’t doing too shabby.

I wonder how they decide who gets the kids?

Fact #11: Owls can be promiscuous.

Hmm…maybe this has something to do with the divorce rate?

But seriously, during years when mice and other food are plentiful, some usually monogamous owls will get a little promiscuous!

During these periods of “boredom,” males have been caught mating with up to three females. Not to be outdone, females have been seen with at least one beau on the side.

Barn Owls can eat up to 1000 mice per year and keep pests and vermin under control!

Getting rid of all these rodents saves lots of damage to stored grain or nibbled crops.

Using Barn Owls as natural pest control is gaining traction among farmers as a way to use less poison and other invasive methods of pest management.

Some owls make noises like a horse whinny: Eastern Screech Owl heard below.

Some make sounds reminiscent of sharpening a saw blade on a whetstone: Northern Saw-whet Owl heard below.

Even if an Owl does hoot, it is definitely not the only noise it makes. In addition to hoots, owls may chirp, whistle, scream, screech, bark, growl, or shriek.

All these different noises are typically different messages trying to be relayed. For example, hoots are usually territorial calls, mating calls, or serve as a warning to other owls to stay away.

Loud and unpleasant screeches are often used when owls feel threatened or are attacking a predator. At other times, loud shrieks may be used during mating season to attract a mate.

The oldest owl fossils are dated 50 to 60 million years ago!!

The oldest owl on record (Ogygoptynx) lived in what is now Colorado around 61 million years ago!

This is around the same time many dinosaurs went extinct!

So let’s go back to that whole “Owls can turn their heads around and upside down” thing:

Why don’t they die when they do this!? Where do all the bones go!?

If a human tried to turn their head upside down, blood would not be able to get to our brain, and we would die (not to mention we would snap our neck).

However, unlike humans, the spaces in an owl’s spinal column that hold blood vessels are much wider than the blood vessels themselves. This means there is a much-reduced chance of anything being pinched closed.

However, if that does happen, owls have blood-pooling reservoirs at the top of their spines, which can continue to supply the head with blood if the supply stops for a short while!

If this is your first time at Bird Watching HQ, you need to check out the live bird and animal cams from all around the world!

Did you learn anything new today?

Unfortunately, this article only scratched the surface. With over 200 owl species in the world, there are many fun facts that were not listed.

Please share something interesting that you know about owls!