When most people think of turkeys, they immediately think of Thanksgiving. But there is more to these incredible birds than feasting on them every November.

Today, you are going to learn 23 FUN facts about turkeys!

We are going to discuss many things, such as their interesting history, high levels of intelligence, unique physical features, and even how to distinguish their poop. 🙂 And make sure to make it to the end to learn if eating turkey actually makes you sleepy.

#1. Turkeys were ALMOST our national bird! 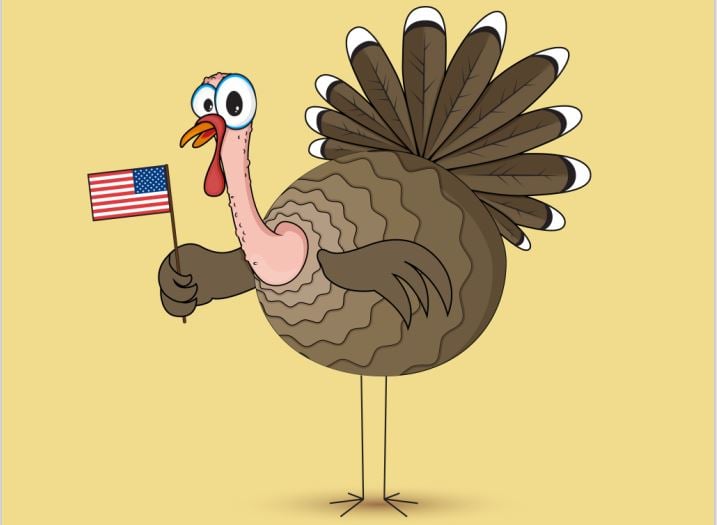 As the story goes, Benjamin Franklin preferred the Wild Turkey to the Bald Eagle as the national bird of the United States! So is this myth actually true?

Well, in a letter to his daughter Franklin lamented the selection of the occasional garbage and carrion-eating Bald Eagle as the nation’s representative, as it was not the respectable representative he had hoped for! The Bald Eagle, he remarked, was lazy and a thief. Franklin didn’t like that they would wait for another eagle to capture lunch and then ambush it to steal the catch for his greedy self!

Moreover, Franklin said the turkey was intelligent, protective of its territory, and would fearlessly attack any perceived threat. In every way, he thought it was a better icon for the United States. But he never actually proposed this thought to anyone except in a letter to his daughter, which is what triggered the myth.

#2. Domestic turkeys are different from wild ones.

Domestic turkeys that are raised for food are roughly double their original size. This is because they have been bred to have oversized breasts to provide more food. In fact, they are so big that domestic turkeys can’t fly like their wild airborne counterparts.

In addition, domestic turkeys have a hard time mating because of their size, and most commercial turkey producers rely upon artificial insemination to fertilize turkey eggs.

Lastly, domesticated varieties of turkey have been deliberately bred to be entirely white. This is because white birds don’t have skin colors underneath the feathers, so the bird is more consistent and attractive in the store.

#3. How the turkey got its name is interesting!

So, somewhere between 4,000 and 2,000 years ago, the Mayans/Aztecs domesticated the South Mexico Wild Turkey for food. They used it for religious sacrifice and feasts, and it is the basis for our modern domestic turkey.

Sometime later, Spanish Conquistadors got to the New World and brought these domesticated birds, which were not called turkeys yet, back to Europe. Once in Europe, the turkeys became popular and were equated with guinea fowls, which had been brought over from Africa. At the time, the Guinea Fowls were mistakenly called “Turkey cocks” since they were originally brought over by Turkish Traders, completely ignoring their African origin. However, since they were associated with Guinea Fowls, the name “Turkey cocks” stuck, and eventually, it was shortened to “turkey.”

Interestingly, male turkeys have chest beards that grow continuously from their chests. These beards grow between three and five inches per year, often reaching a length of seven inches or more!

Since turkeys are birds, these beards are not actually made of hair. Instead, they are specialized feathers called mesofiloplumes and are primarily used for attracting mates.

#5. Only one gender of turkey gobbles!

Only male turkeys make the famous gobble call. This sound is used to announce themselves to females while competing with other males for the ladies’ attention. Other turkey sounds include purrs (mostly females), yelps, kee-kees, clicking noises, cackles, clucks, putts, and kutts.

#6. Turkeys have weird stuff on their faces! 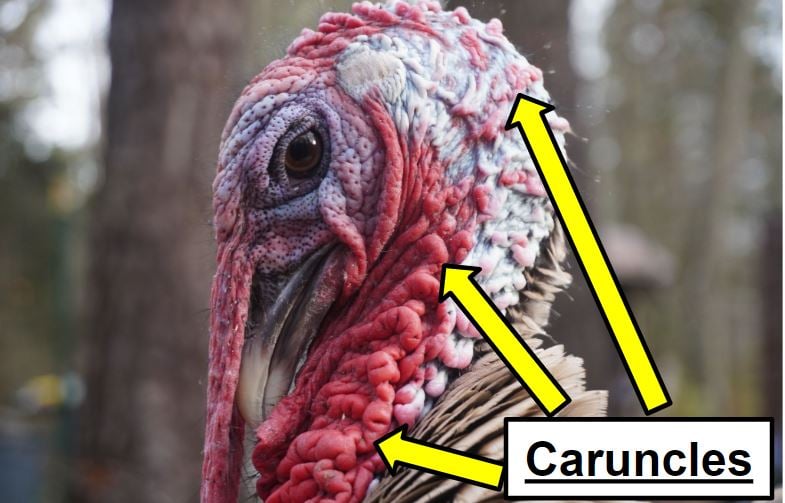 Have you ever looked closely at the face of a turkey? It has some truly remarkable (others say gross) features called caruncles. Depending on your point of view, these bulgy bits on the head look like warts, mini-brains, or intestines. 🙂

Interestingly, both sexes have caruncles. Females generally stay a non-descript pink color. But for males, the caruncles can be either red or blue, depending on their mood!

#7. Turkeys have something dangling off their neck! 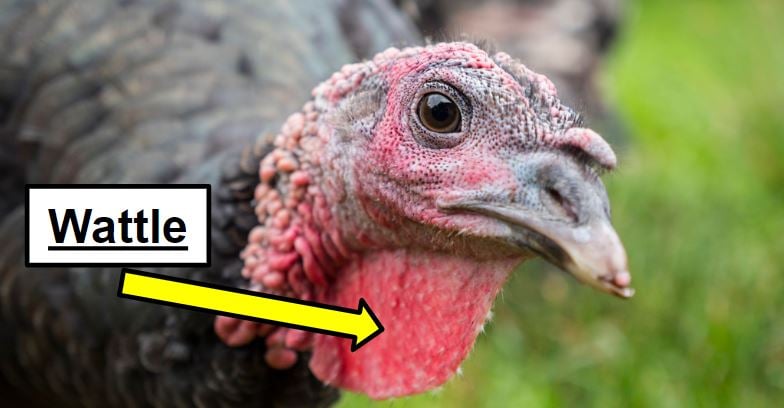 The dangly flesh that hangs off the front of a turkeys neck is called a wattle. Both sexes have wattles, and they can change colors depending on the mood, as extra blood will rush into them to appear bright red for maximum visual impact. Conversely, if they become scared by a predator, the blood will rush out of the wattle and appear blue.

Wattles also help release heat from a turkey’s body on a hot day!

#8. What’s that thing on a turkeys beak?

Both male and female turkeys have snoods, which are another form of caruncle. Male turkey’s snoods extend over the beak and are essentially dangly, ornamental fleshy appendages.

The length of them reflects the animal’s good health for mating purposes. Longer snoods also indicate higher levels of testosterone in the bird. Snoods can also be used to predict the winner of a competition between two males when fighting.

#9. The legs of turkeys are dangerous!

Males have sharp boney protrusions on their legs, making effective weapons during combat. Native Americans even used to use them as the point for their arrows. Who knew that eating a turkey leg could be so dangerous? 🙂

Turkeys are almost exclusively ground-foraging birds, which means they eat their food from the ground. They exist primarily as vegetarians, as most of their food consists of acorns, nuts, grass, seeds, etc. But, they will gladly eat bugs and other small invertebrates when available.

Wild Turkeys like to roost in trees at night, so to get up there, they need the ability to fly! And for such a large bird, they can fly a surprising distance, between a half and a full mile. They can also fly faster than you think and reach speeds up to 50 mph.

Turkeys can run at surprising speeds of 15-25 miles per hour on the ground. If you irritate one, they can definitely outrun you, so stay cool and don’t do anything threatening, or you’ll almost certainly regret it. 🙂

Baby turkeys, also called poults, are considered precocial and nidifugous, which means they are fairly developed when they are born and can leave the nest immediately. This is a good thing because poults are preyed upon by a large variety of predators, including snakes, raccoons, skunks, and many different types of birds of prey.

A turkey’s head is incredibly unique, and as we just learned, it includes a snood, a wattle, and caruncles. Interestingly, these features change color based on excitement, fear, or aggression level.

If it’s bright red, that means blood is rushing in, so back away slowly because they’re in the mood for a fight or readying to attack. Blue often means the blood has left and that the turkey is scared. 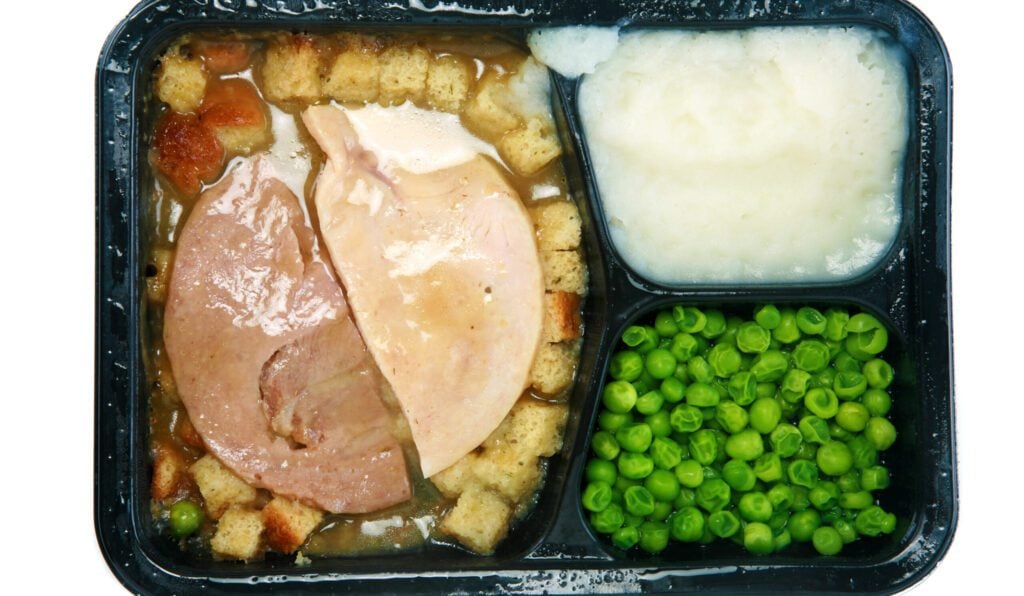 The first meal eaten on the Moon, when astronauts Neil Armstrong and Ed “Buzz” Aldrin landed there in 1969, was roasted turkey and all of the trimmings from specially prepared foil-sealed food packets from NASA.

Landing a spacecraft on the Lunar surface was terrifying because they didn’t know if it was a solid rock or a big bowl of dust into which they would sink. So, when they landed safely, it was a good reason to have a Thanksgiving-type meal on the 20th of July, 1969! 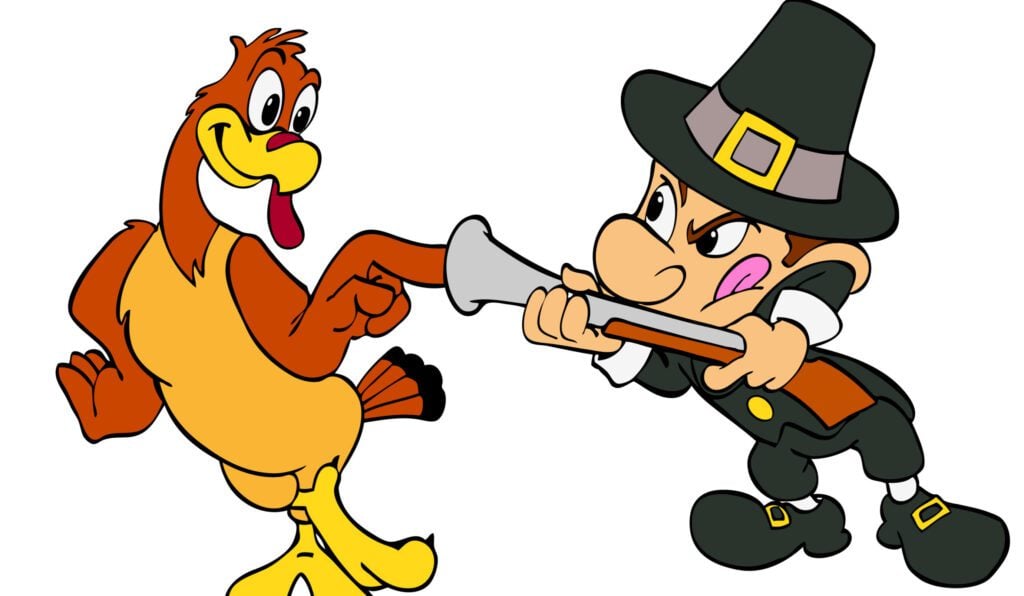 This turkey fact is depressing. Unfortunately, turkeys have nearly gone extinct twice because of humans.

The first time was in the early 1800s when they nearly vanished due to overhunting and habitat loss. As settlers relentlessly chopped down forests for lumber to build homes, towns, and cities, turkeys disappeared along with the trees. And then it happened again in the 1930s when turkeys were nearly hunted to extirpation because it was thought they were limitless and able to support any level of hunting.

It took careful shepherding and management to bring them back from just 200,000 birds to the current population of 7.5 million Wild Turkeys. This is regarded as one of the most successful population recoveries ever.

#17. Turkeys are smarter than you think.

This fact about turkeys may surprise you, and that is that turkeys are highly intelligent in many respects. For example, they can map out and remember details of their home range, about 1,000 acres of land.

Additionally, if you’re patient and pay attention to them, they become familiar like pet dogs! Each day you visit, they will move a little closer to you until they decide you are acceptable, and then they are quite friendly. But be aware this takes time, and they need to make the decision for themselves.

#18. Their eyesight is better than you think.

Although it’s not as good as an eagle, turkeys have incredible vision. They can see at least three times better than humans in terms of distance and resolution. On top of that, they can see nearly 270 degrees, so very little head movement is necessary to observe everything around them.

#19. Their hearing is better than you think.

Turkeys don’t have ears you’d recognize since they are small holes behind the eyes. Nevertheless, they can hear sounds in the subsonic frequencies beyond the range of humans up to a mile away.

Combined with their extraordinary vision, intelligence, and speed, Wild Turkeys are incredibly hard for predators to catch.

#20. Learn your “Turkey Terminology” below. 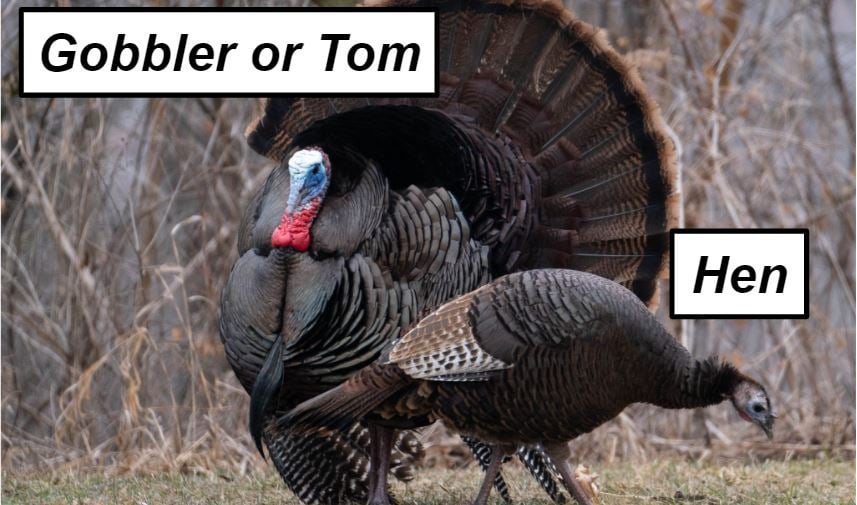 Next time you talk about turkeys, you can impress your friends by using the correct terms. 🙂

Interestingly, poop can tell you a lot about a turkey when it is not in sight. For example, the bigger the dung’s diameter, the older the turkey usually is.

Also, the design of the feces tells you if the turkey is male or female.

Click HERE for a PDF guide to help you solve the turkey dung dilemma (includes pictures!). 🙂 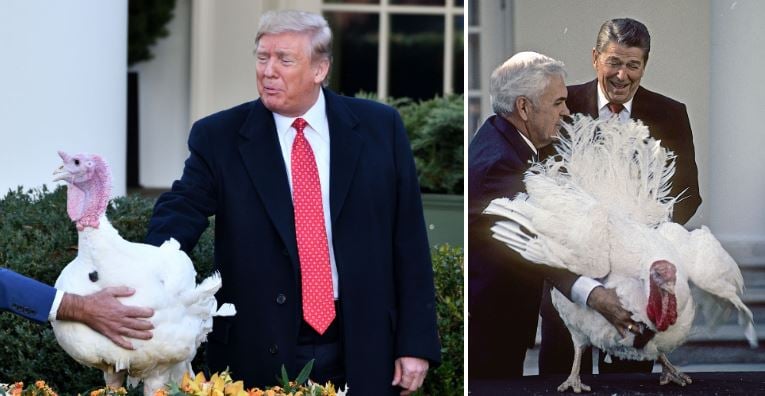 Every year, the current United States President grants a pardon to two birds (a presidential turkey and a vice-presidential turkey) just before Thanksgiving. The selected birds live the rest of their lives on farms and are often available to the general public to greet, visit, and photograph.

Considering that around 46 million turkeys are killed each year for Thanksgiving, the odds of being given a presidential pardon is 1 in 23 million. 🙂

#23. Eating turkey DOES NOT make you sleepy.

I’m sure you have heard that supposedly eating turkey on Thanksgiving makes you fall asleep. And yes, of course, it contains that infamous amino acid named tryptophan, which can have a calming effect.

But the difficulty is that you’d have to eat an incredible amount of turkey and nothing else to get enough tryptophan to obtain an effect. That lethargy that overtakes you after Thanksgiving is more likely caused by all the excess carbs from the crust of mini-marshmallow-topped sweet potatoes, stuffing, and a surprisingly large amount of alcohol.

What is your favorite fact about turkeys?