Are you trying to identify a bird found in Madagascar?

Some of the wildest and most colorful birds you could imagine are found here. From gigantic, flightless birds to colorful showstoppers, there’s something to catch everyone’s attention!

Due to the sheer number of species, there was no way to include every bird in Madagascar in this article. So instead, I tried to focus on the birds that are most regularly seen and observed.

Today, you will learn about 5 COMMON types of birds in Madagascar! 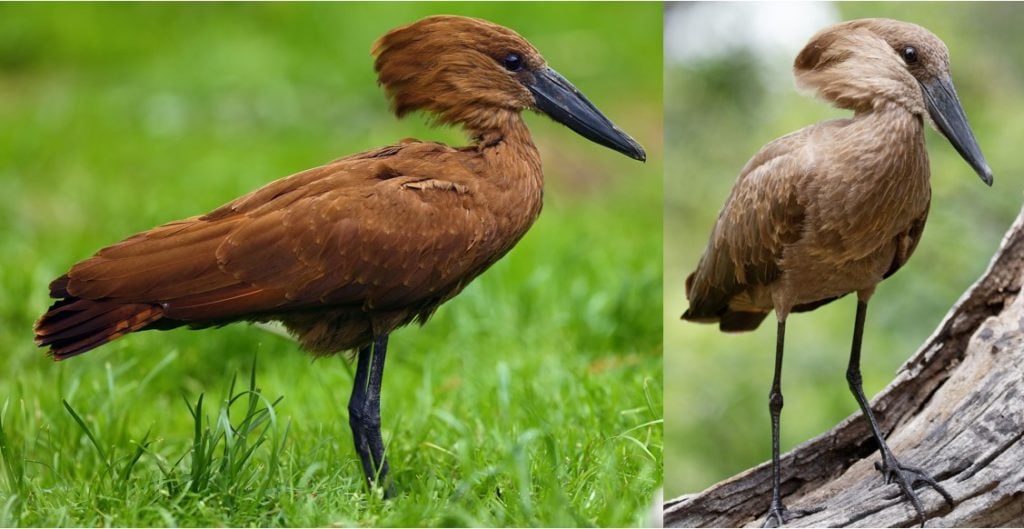 You might have seen pictures of the Hamerkop on its favorite perch – the back of a hippopotamus! This water bird likes to hunt from these living platforms, and the hippos don’t seem to mind. 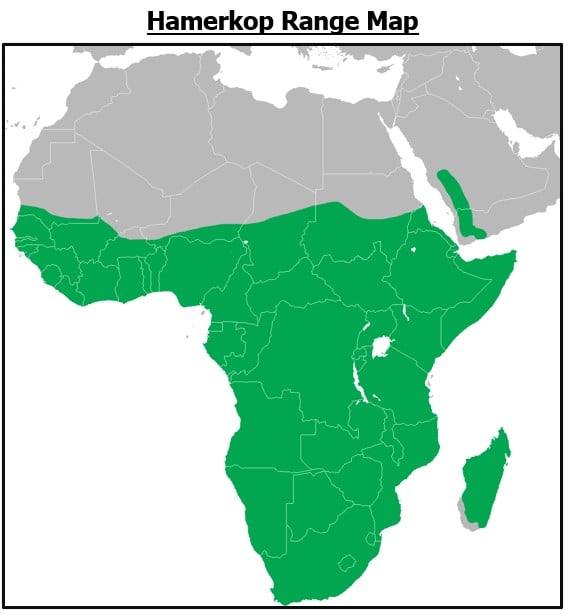 An easy way to identify this bird in Madagascar is to look for its incredible nest. They build a huge nest (up to two meters tall) in a tree fork, with only a tiny side entrance. The same nest can be used for up to four years unless it is disturbed in some way, which happens more often than you might think.

They’re also rather noisy, cackling and yapping while they hunt and socialize.

These chicken-like birds in Madagascar are capable of flight but only do so when in danger.

Instead, they walk up to 10 kilometers (6 miles) daily in their quest for food. They’ll eat anything from small mammals and lizards to worms, insects, frogs, small snakes, snails, seeds, fruit, and spiders. 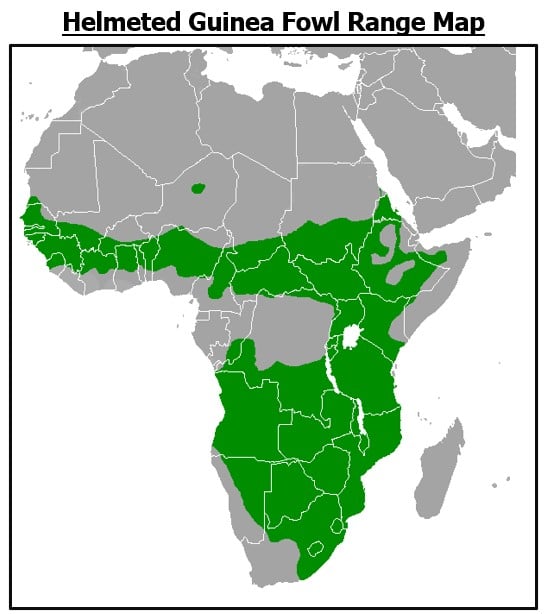 Outside breeding season, they form flocks of up to 24 birds and roost communally so they can alert each other to predators. They have an explosive take-off and only flap for short distances, gliding for longer flights. They prefer to flee from predators on land and can run 35 kph (22 mph) on land.

Helmeted Guineafowl have various calls, and some are more pleasant than others. For example, their whistling tune is much nicer on the ears than the raucous and irritating one found here.

Little Bee-eaters are the smallest species of African bee-eater. These birds are quite tame and friendly. They make practically no sound except for a quietly trilled “s-s-e-e-e-p.” 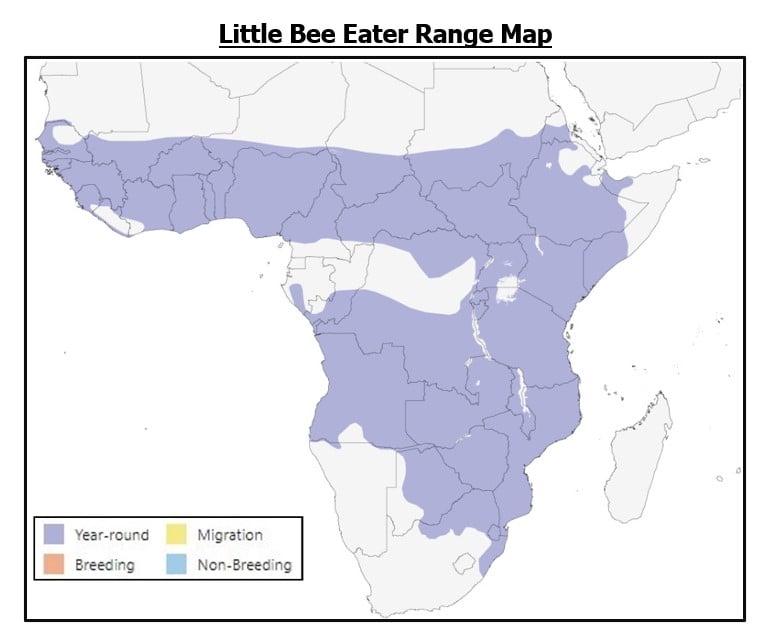 As their name implies, these little birds subsist on hornets, wasps, and bees. But, they’ve found an efficient way to avoid being stung by their favorite foods. Before they eat them, they smash their prey’s stinger into a hard surface several times to extract it.

Look for groups of Little Bee-eaters lined up, roosting communally on a branch. These tight-knit communities spend time together year-round. For example, a non-breeding pair will help feed chicks and even sit on the eggs to help out. Some nesters can have as many as five helpers raising the nestlings.

If you’ve ever wondered about the difference between a crow and a raven, studying the Pied Crow is a good way to learn! This bird in Madagascar is considered a “link” between the two related families. It has the larger bill and long legs of a raven, as well as wider wings and a longer tail. However, its beak is small and straight like a crow’s, and it also has the typical “caw” call.

Pied Crows are often found near humans, but they don’t interact with people very much. They seem to like villages and towns, probably because of the abundance of food due to human refuse. 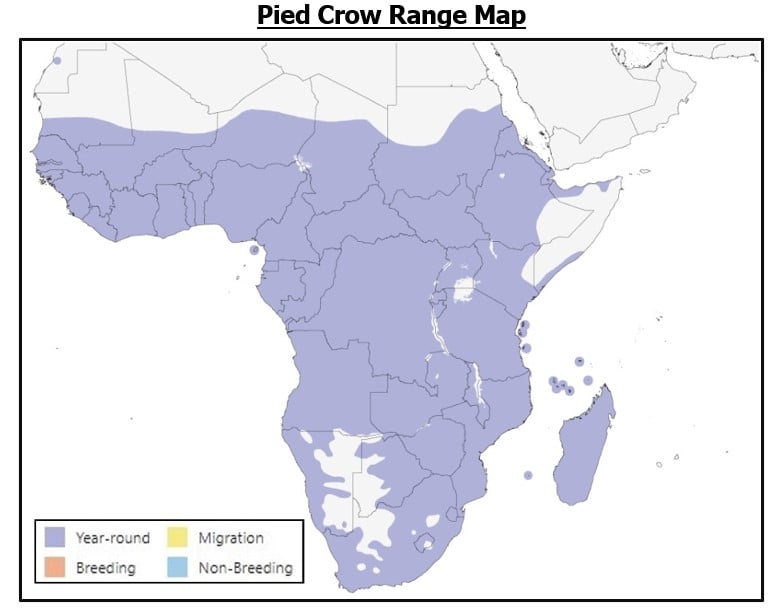 They are social and may congregate near an abundance of food but are generally found in pairs or small groups. Pied Crows eat reptiles and mammals, nestlings and eggs, insects and invertebrates, peanuts, grains, carrion, and human trash. If there is a slaughterhouse in the vicinity, you’ll almost certainly find them there, too.

It’s not uncommon for hundreds of Speckled Pigeons to form a flock and inhabit the exterior of large human structures. They’re the primary food source for birds of prey that live in large cities. 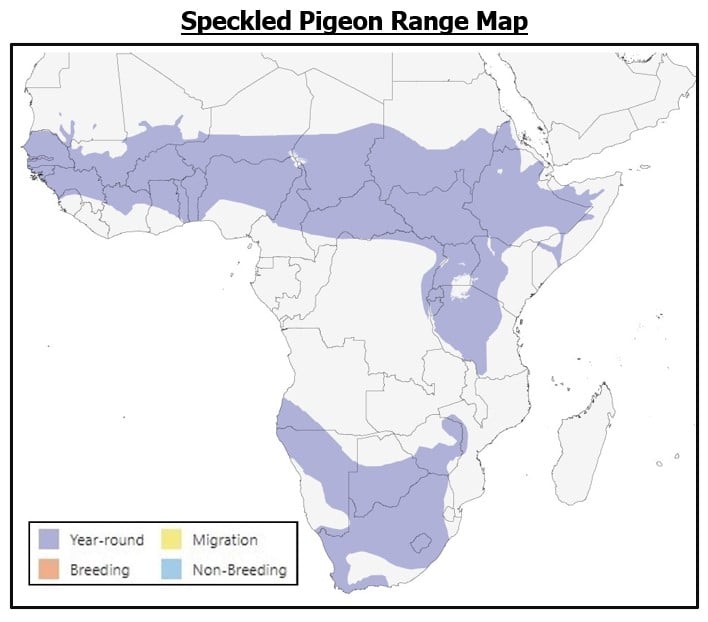 Although their shape and behavior are similar to typical urban rock pigeons, Speckled Pigeons are much larger. This species is the largest pigeon in Madagascar at nearly 41 cm (16 inches) long.

Even if the Speckled Pigeon’s call is understated and melodic, it can be overwhelming when hundreds are singing at once. It sounds like “OooOOOuu” repeated a dozen times or more in a row.

Which of these birds in Madagascar have you seen before?

Check out these guides to other animals found in Madagascar!