What types of bluebirds can you find in the United States?

Bluebirds are one of the most popular birds in the United States and have captivated people’s interest and attention for a long time. These small birds, distinguished by their beautiful blue plumage, are actually part of the thrush family (Turdidae).

And while everyone WANTS to attract bluebirds to their backyard, it’s surprisingly challenging to get them to visit bird feeders. But don’t worry, if you keep reading, you will learn some proven tips you can implement today!

Below are the 3 types of bluebirds that live in the United States!

Few birds are as pretty as an Eastern Bluebird.  Thanks to their cheerful disposition and amazing beauty, these birds are always a pleasure to see, both for birders and non-birders alike!

Males are vibrant blue with a rusty chest and throat and fairly easy to identify. Females look similar, but the colors are much more subdued.

Eastern Bluebirds are common in the United States in open areas. 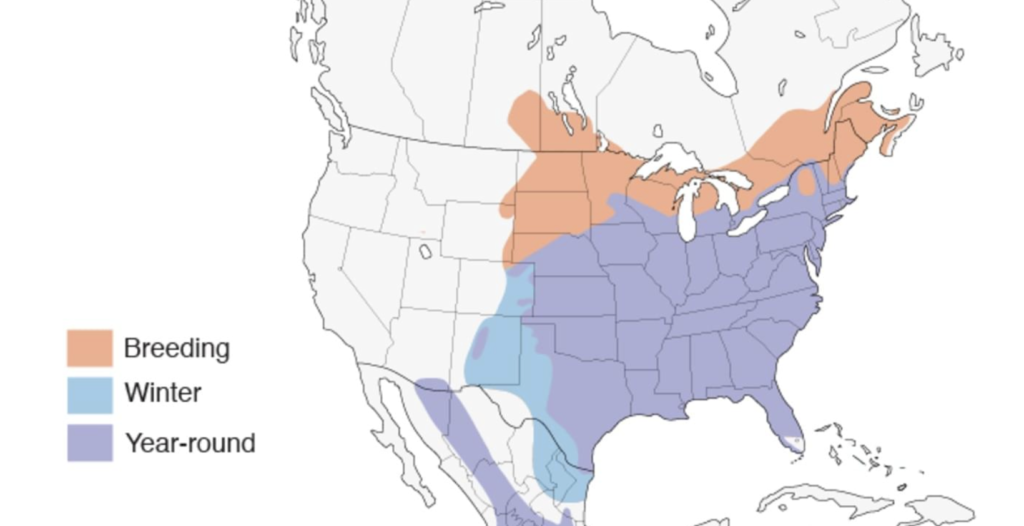 Look for them in meadows, fields, cemeteries, golf courses, parks, backyards, and even Christmas tree farms!

The primary diet of these birds changes with the seasons. During warmer months, insects caught on the ground are their primary source of nutrition, such as beetles, crickets, and spiders. When bugs go away in winter, their diet switches to fruit and berries found on trees.

Can you attract Eastern Bluebirds to bird feeders?

The short answer is YES. You can attract these bluebirds to your backyard feeding station, as long as you make special provisions for them.

Here are two quick tips you can implement today!

#2. Choose bird feeders that bluebirds will actually use.

You can also listen for Eastern Bluebirds!

Press PLAY above to hear an Eastern Bluebird!

These birds have a beautiful call. Listen for a liquid sounding warbling song that consists of 1—3 notes, which is typically given several times in a row.

It was once rare to see Eastern Bluebirds in the United States!

Around 100 years ago, Eastern Bluebird populations started declining because of an extreme decrease in available nesting sites.

Bluebirds are considered cavity nesters, which means they will only nest inside a fully enclosed cavity, except for the entrance hole. To complicate the issue, these birds are unable to make their own nest cavity. So in the wild, they only use holes in trees that were excavated by woodpeckers from seasons past. 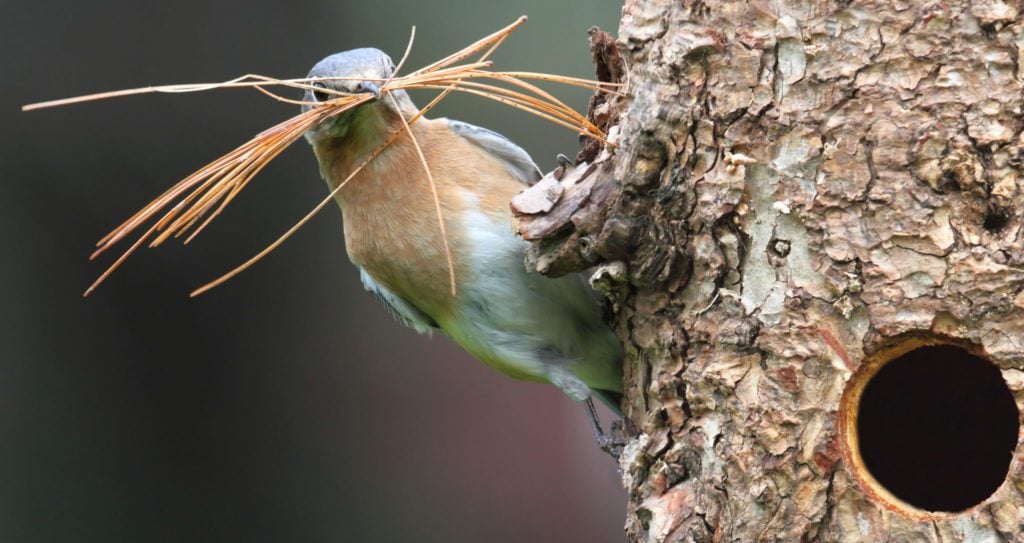 And over time, the availability of nesting sites decreased for the following reasons:

But thanks to many dedicated people building nest boxes, bluebirds have recovered in the United States!

The North American Bluebird Society has tirelessly promoted bluebird conservation to help bring public awareness to the nesting cavity issue, along with an incredible increase in knowledge about year-round requirements and behavior of all three bluebird species.

Look for these birds in the western United States at the edge of forests or in open woodlands.  Western Bluebirds are not often found in meadows and fields, similar to other bluebird species (Eastern and Mountain). Instead, these birds opt for the woods. Their favorite habitat seems to be areas that have been logged or burned, as these places are open but still contain many trees.

These bluebirds tend to stay close to the ground so they can fly down quickly to catch insects, which are their favorite food. They can usually be found perched on low limbs, signs, and fence posts. Western Bluebirds even stay low to the ground while flying!

You can find Western Bluebirds in the United States throughout the year, but some populations migrate south to warmer temperatures.

Like all bluebirds species, they only nest in enclosed cavities.

Competition is high for these limited spots, and they regularly compete with nuthatches, House Wrens, European Starlings, House Sparrows, swallows, and even other Western Bluebirds.

Press PLAY above to hear a Western Bluebird!

You should try listening for Western Bluebirds next time you are out. These birds make a soft call, which phonetically often sounds like “kew” that is repeated several times.

Western and Eastern Bluebirds are two distinct species, even though they look almost identical.

Here’s how to tell them apart:

There are not many things more beautiful than seeing a Mountain Bluebird while hiking in the mountains. 🙂

It’s hard to mistake a Mountain Bluebird if you see one, especially the males, as they are covered with beautiful sky-blue feathers on their head, back, and wings. Females are a bit trickier since they are mostly gray-brown, with tinges of blue on their tail and wings.

In the western United States, look for these bluebirds in open areas.

As their name suggests, Mountain Bluebirds are observed at elevations up to 12,500 feet during the breeding season. Once winter arrives, they typically fly down to lower elevations.

These birds are found in open areas, such as meadows, prairies, or pastures. They also enjoy habitat with a mix of grasses, shrubs, and trees, such as open woodlands, burned areas, or places that have had the forests thinned by logging.

Mountain Bluebirds feast on insects during warm months and switch their diet to mostly berries in winter. But unlike other bluebird species, they are excellent aerial hunters and routinely grab insects out of midair! 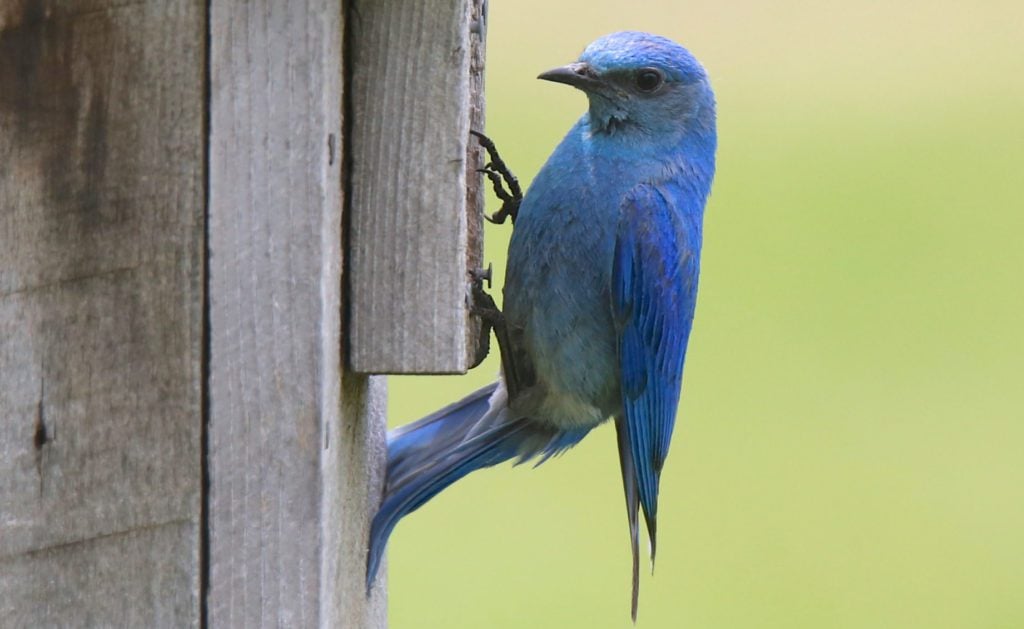 These birds take readily to human-made nest boxes. Providing bluebirds with a suitable house is extremely helpful to them but also enjoyable for humans to watch!

Competition for nesting cavities is fierce for Mountain Bluebirds. Not only do they have to compete with each other, but also with Western Bluebirds, European Starlings, House Sparrows, House Wrens, and Tree Swallows.

In fact, finding a suitable nesting location is so important for female Mountain Bluebirds, they rarely care about anything else. She chooses her mate almost solely based on the quality of his nesting cavity, ignoring things like looks, singing skills, and flying ability!

Press PLAY Above! Next time you are in a mountain valley or meadow, keep your ears open and listen for a Mountain Bluebird!

Where have you seen bluebirds in the United States?