What kinds of caterpillars can you find in Montana?

Caterpillars are some of the MOST fascinating insects in the world! It always amazes me that caterpillars eventually turn into butterflies or moths.

There are hundreds of different caterpillar species found in Montana!

Since it would be impossible to list them all in one article, I chose the 8 most interesting and common ones to share with you. 🙂

Like the adult butterfly, the Monarch is one of the most well-recognized caterpillars in Montana!

Their distinctive stripes and tentacles make them look cartoonish. But this highly visible coloring sends a message to predators: Back Off!

Monarch Caterpillars are toxic to most animals, and at the very least, taste bad! This poison comes from their diet, which is almost entirely made up of milkweed. Toxins from the milkweed plant stay in the caterpillar, producing a bitter taste and poisonous effects. 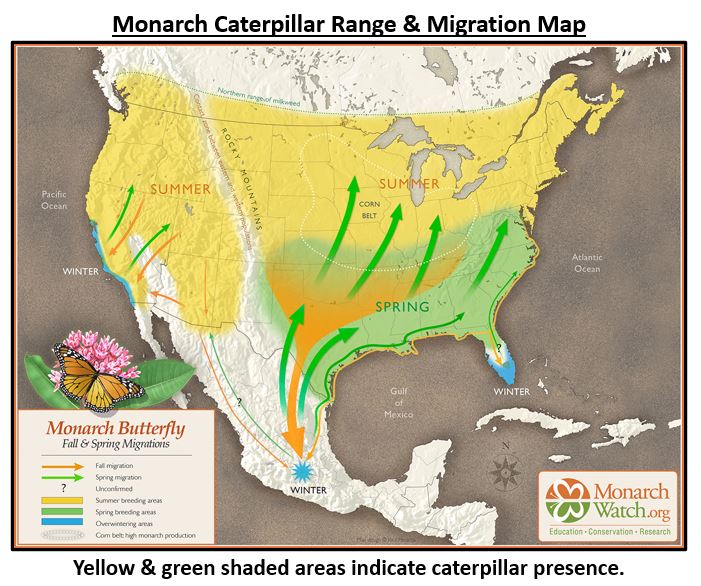 If you have milkweed in your yard or nearby, your chance of finding Monarch Caterpillars is excellent! Honestly, there is nothing more fun than finding these colorful insects on our milkweed plants and getting to watch them transform into adults!

In Montana, this species is often called the Imported Cabbageworm because it isn’t native to North America. It was introduced in shipments of cabbage and other brassica plants and soon became an invasive species. 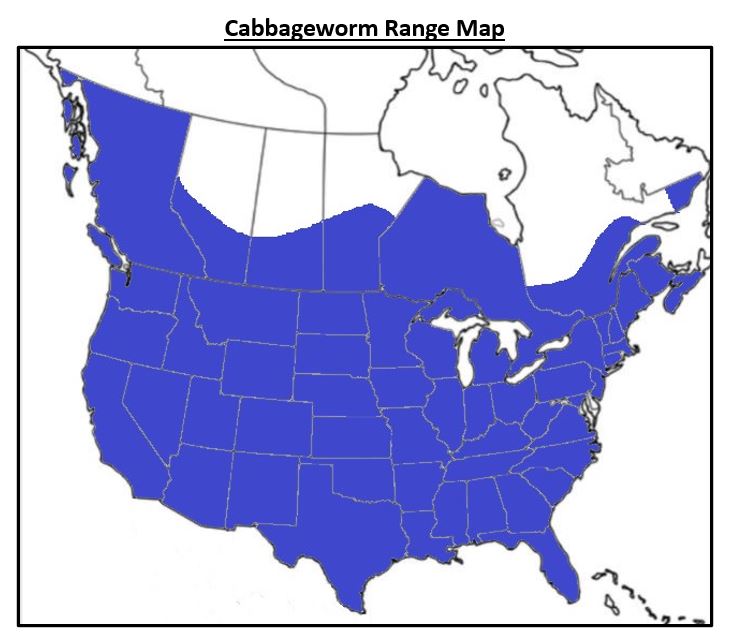 Cabbageworms are considered agricultural pests and can do severe damage to crops to their host plants. Cabbage, brussels sprouts, broccoli, and cauliflower are all susceptible to damage. For a home gardener, the best way to deal with Cabbageworms is to prevent a large infestation. Plant covers, regular weeding, and varied plantings can all help with preventing this hungry invader!

One reason Cabbageworms are so damaging is that they are voracious eaters! They can easily skeletonize entire plants, eating everything but the toughest stems and midveins. Boring through heads of cabbage and making huge dents in broccoli are no problem for this Very Hungry Caterpillar!

Cabbageworms grow into Cabbage White Butterflies, which are one of the most abundant butterflies in Montana! If you see a white butterfly in the spring, chances are it’s a Cabbage White! 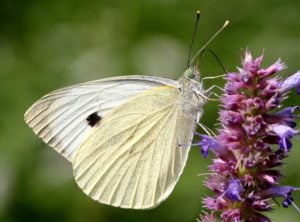 As a kid, I can remember hearing tons of stories about Woolly Bear caterpillars – and the coolest part about them is that most of the stories are true! One myth you might have heard is that Woolly Bears can predict the type of winter we’ll have. Unfortunately, this one isn’t true. But there’s plenty of other interesting facts about this cute little caterpillar!

The most fascinating thing about Woolly Bears is the way they hibernate.

That’s to say, they don’t hibernate at all! Instead of burrowing or pupating to escape the cold, Woolly Bears allow themselves to freeze solid. They have a unique chemical in their blood that allows them to thaw out and continue in the spring as if nothing happened!

You may have heard that Woolly Bear Caterpillars are venomous, but this isn’t entirely true. Their hairs don’t contain any toxins or irritants, but some people are sensitive to the hairs and may get a slight rash if they touch one. It’s best to observe the species without touching them, just in case. 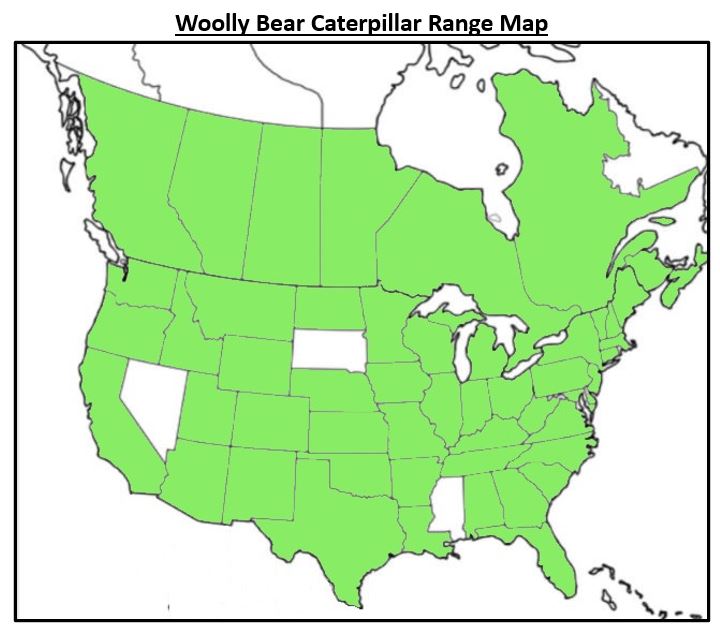 Woolly Bear Caterpillars and their adult-form, Isabella Tiger Moths, are found in incredibly varied climates, even the Arctic! Because they will eat almost anything, including herbs, tree leaves, and grasses, they can be found pretty much anywhere plants are growing. Look for them in groups near the base of plants. 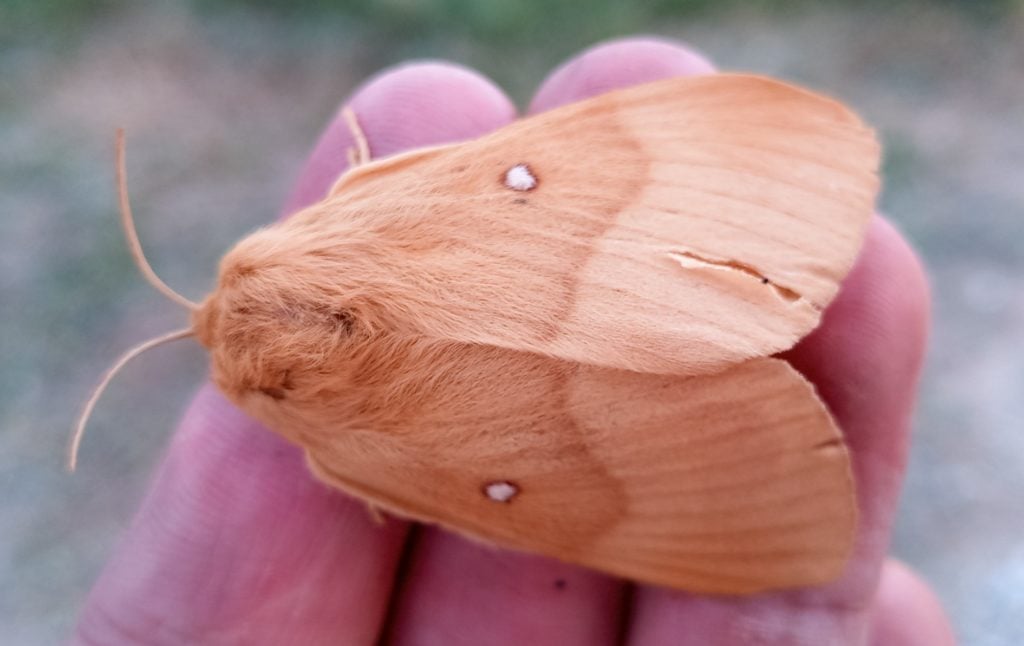 Just don’t expect them to take over for your meteorologist! 🙂

This is by design; their lumpy, mottled appearance makes them look like bird droppings, warding off predators! 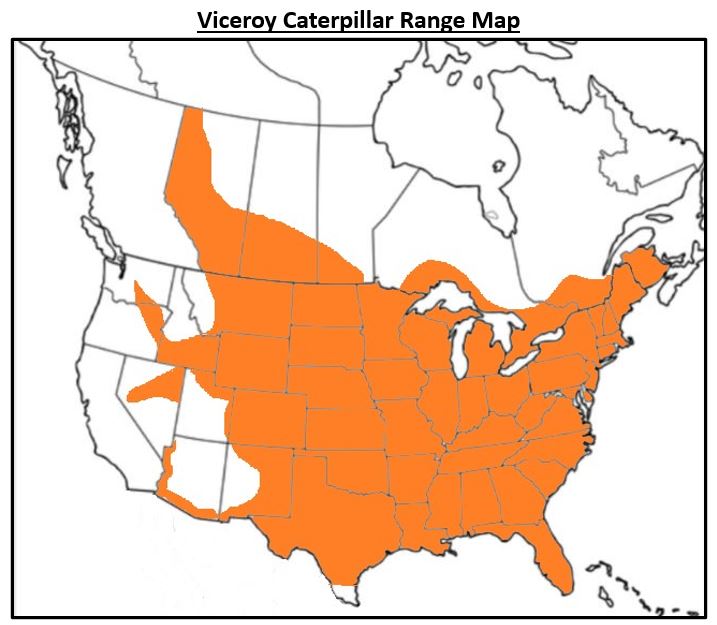 Interestingly, this isn’t the Viceroy’s only protection against predators. Viceroy Caterpillars eat plants that are rich in salicylic acid, which they store in their bodies. When predators try to eat them, they are rewarded with a strong, bitter flavor and an upset stomach. One taste and they learn to stay away!

Viceroy Caterpillars primarily live in open forests or fields, and they’re found across many different climates. Look for them during spring and summer, which is when the adults typically mate.

This species has one of the best camouflages of any caterpillar in Montana!

Large Maple Spanworms look exactly like a bit of twig on a tree, even from up close! So, it’s hard to imagine any predator observant enough to try and eat one, which is precisely its goal.

Their camouflage is the only defense Maple Spanworms have because they aren’t poisonous. They’re a favorite snack for determined birds! 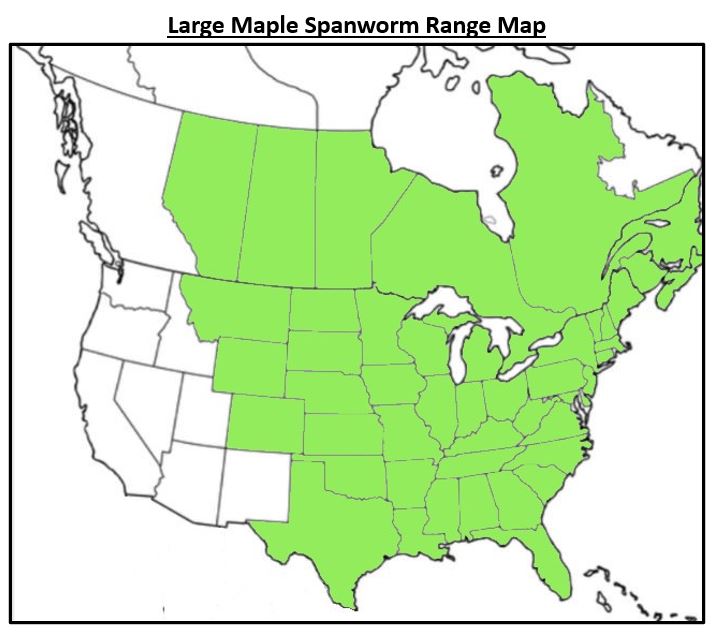 When they’re not imitating sticks, Large Maple Spanworms have an interesting way of getting around! They plant their front legs, arch their back in the air, and bring their back legs forward to meet their front. Then, they throw their front forward and repeat the whole process. They’re one of many caterpillars that move like this, earning them nicknames like inchworm, looper, or spanworm.

Large Maple Spanworm Moths are just as adept at camouflage as their larva – they look exactly like dead leaves clinging to a branch! 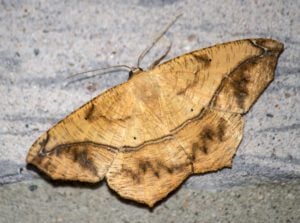 Variegated Fritillary Caterpillars share the same name as their adult-form butterflies. They eat ornamental plants like violets, pansies, and passionflower. 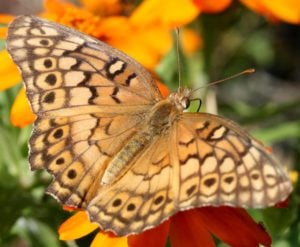 Look for these caterpillars in eastern Montana in meadows, open lots, and fields. 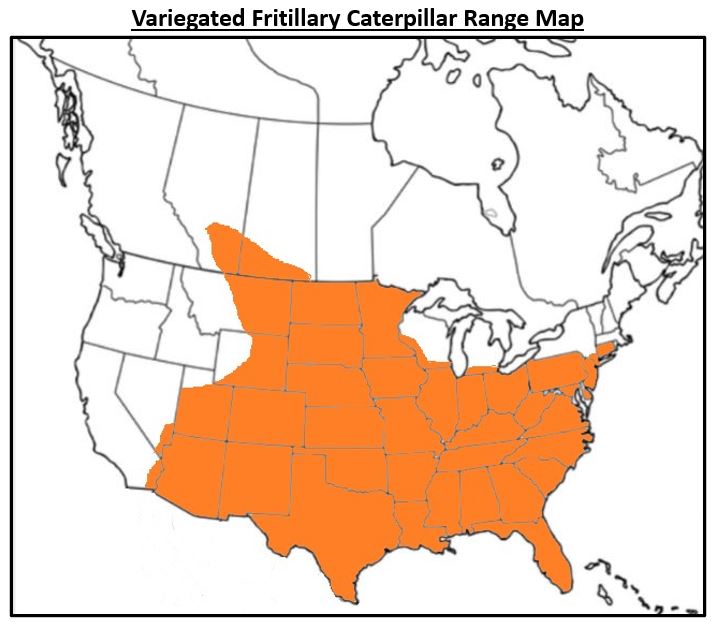 The Variegated Fritillary’s chrysalis is the most beautiful of all the caterpillars in Montana. This protective shell is where the caterpillar transforms into the adult butterfly. Its pearly white color and shiny gold spikes make it look like an expensive jeweled pendant!

However, you may not have even realized it because this species is an expert at camouflage. Its body is meant to look like a dry, curled leaf clinging to a branch. I think it succeeded! 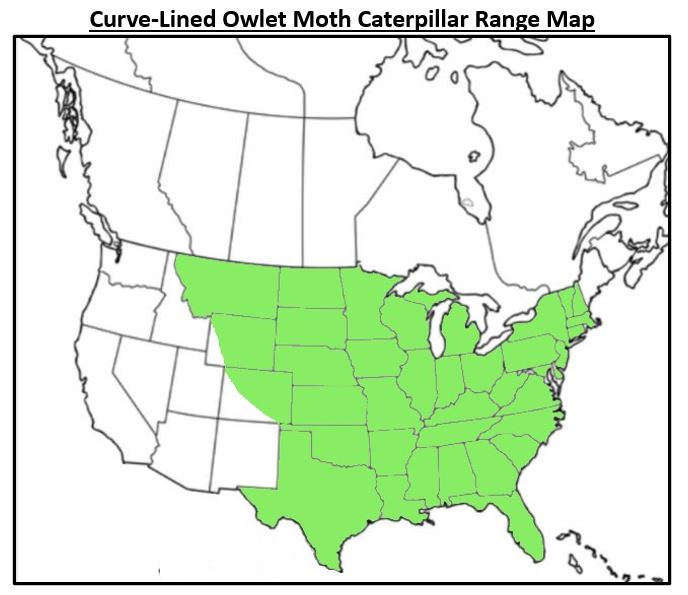 Interestingly, it isn’t only the larva of this species that hide in plain sight. Curve-Lined Owlet Moths also have coloring and texture that resembles a dry leaf. So, it seems like even though the insect goes through a complete metamorphosis, it keeps some of the survival traits into adulthood! 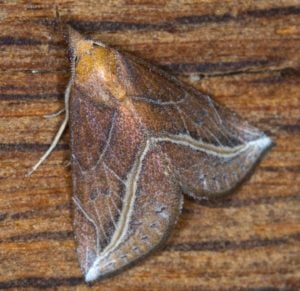 The host plant of the Curve-Lined Owlet Caterpillar is greenbrier, a vine plant common in many habitats. This species prefers woodland and nearby clearings, but it’s sometimes spotted in more developed areas like office parks or lush backyard gardens.

Their bulbous bodies and multicolored, spiked nodules truly look like something from a sci-fi movie. 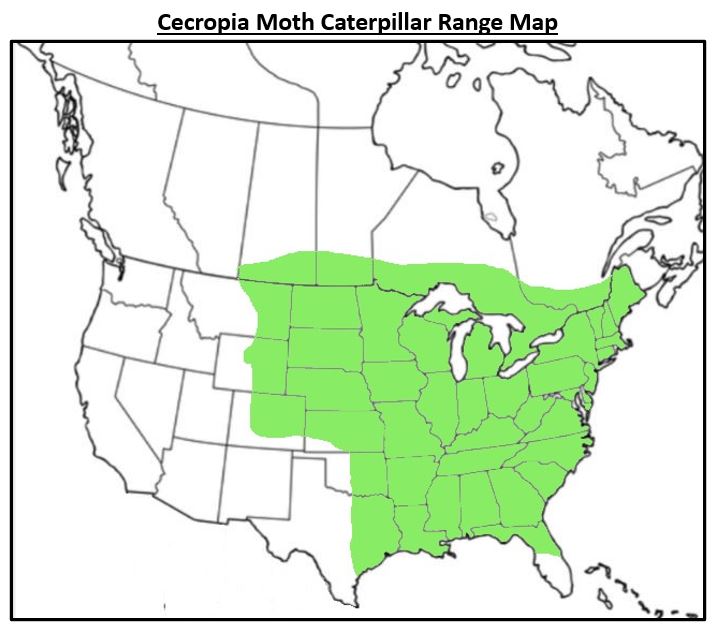 Look for Cecropia Caterpillars on maple, birch, and apple trees during late spring. They remain in their caterpillar stage for about two weeks before encasing themselves in their chrysalis for winter.

This species is one of many caterpillars in Montana called a “silkworm”. The name refers to the silk cocoon they spin around their chrysalis in preparation to become a moth. The cocoons are brown and cling to the side of host plants, and look like dead leaves.

As strange as Cecropia Caterpillars look, it’s nothing compared to the adult Cecropia Moth. Not only is the pattern and coloring beautiful, but this moth is also ENORMOUS! In fact, it’s the largest moth in North America!

Do you need more help identifying caterpillars in Montana?

Here are some recommended books on Amazon!

Which of these caterpillars have you seen in Montana?