What kinds of finches can you find in California?

Luckily, almost all of them will visit bird feeders, so you have a good chance of attracting multiple types of finches to your yard. If you’re lucky, you may even see a finch at my bird feeding station right now! I have a LIVE high-definition camera watching my bird feeders 24/7. 🙂

Did you know 13 types of finches live in California?

These small and colorful finches are relatively common in California.

And luckily, American Goldfinches are fairly easy to attract to bird feeders! Try offering their favorite foods, sunflower kernels and Nyjer seed, which not many other birds eat.

It’s also helpful to include bird feeders specially designed for goldfinches. These small birds are easily scared off by larger “bullies.” They will appreciate having places that only they can use! I like the fact they can feed in any position, even upside down.

Because of their diet, American Goldfinches breed later than other birds. They wait until June or July, when most plants are in full seed production, ensuring there is enough food for them to feed their babies.

It’s common to see House Finches in California near people.

Pine Siskins feed at backyard feeders normally in the winter. They prefer to eat smaller seeds without tough shells, such as sunflower or Nyjer seeds.

Listen below to Pine Siskin’s song, which is a twittering warble that rises and falls in pitch. They randomly throw in a “ZZZzzzzzreeee” that rises in pitch ever so often. You will notice they sound more wheezy than other finches in California.

Evening Grosbeaks are one of the largest finches in California.

Evening Grosbeaks are one of the few finches in California without a song. But they do have some simple calls, including sweet, piercing notes and burry chirps, which you can hear below!

As their name suggests, Red Crossbills have crisscrossed bills, similar to if you cross your fingers. They adapted these oddly shaped bills to help them break into tightly closed cones, giving them an advantage over other finch species in California.

They are found in large coniferous forests during their breeding season, especially spruce, pine, Douglas-fir, hemlock, or larch with recent cone crops. But in winter, they wander wherever they need to go to find food. While not incredibly common, they will sometimes visit bird feeders and eat sunflower seeds.

Red Crossbills are very dependent on conifer seeds. In fact, they even feed them to their babies instead of insects like most other songbirds. These finches typically breed in late summer but can actually breed any time during the year if a large enough cone crop is available.

Male Purple Finches are beautiful and have been described as having looked like they were dipped in raspberry juice.

Purple Finches have a big beak and tongue to crush seeds and extract the nut. This is good news because they will also visit bird feeders! Your best chance to attract them is using black-oil sunflower seeds. Having conifer trees in your yard is also a great way to encourage these finches to visit.

Purple Finches can be challenging to identify because they look incredibly similar to the more common House Finch. I know that I’ve made this mistake many times, hoping that I saw a Purple Finch when it was, in fact, just another House Finch. To tell them apart, look at their back, as Purple Finches have red coloring on it, where the back of a House Finch has none.

Similar to other finches in California, males sing a rich, musical warble. Listen below!

Blue Grosbeaks like to eat seeds and grains at bird feeders in shrubby backyards because they feel more protected. You will normally hear them singing before you see them.

Blue Grosbeaks are very shy, especially around humans, which makes them very difficult to observe. Interestingly, both males and females have a weird habit of twitching their tails sideways, although the reason for this behavior is unknown.

Blue grosbeaks have also been known to “sidle”, where they walk sideways along branches, as seen in parrots.   Listen below as the male Blue Grosbeak sings a musical warble that lasts for 2 or 3 seconds.

Black-headed Grosbeaks like to hide in thick foliage, and they are known to hop around while searching for food. Their giant beaks are perfectly adapted for cracking seeds, but they also use them to crush hard-bodied insects like snails!

Like other finches in California, you can attract Black-headed Grosbeaks by providing sunflower seeds. But interestingly, this species has a sweet tooth, and is also known to visit nectar feeders! They will nest in your backyard and garden if there is enough cover and water is close by.

Pine Grosbeaks are one of the largest finches in California!

If one lands on your feeders, they are typically easy to identify since they will be bigger than almost all the other birds.

Pine Grosbeaks are relatively easy to find and see due to their slow-moving (some people call sluggish) behavior. In addition, they are relatively tame and not scared away easily.

Male Pine Grosbeaks sing a high-pitched warble that goes up and down. Listen below! Females do not sing very often.

The Lesser Goldfinch is one of the smallest finches in California.

Look for these birds gathering in large groups, which can number up to several hundred individuals. When flying, they have the same roller coaster style flight as the American Goldfinch.

Lesser Goldfinches are often found in suburbs where they are common visitors to feeders. These small finches eat sunflower seeds, along with the thin-hulled seeds of Nyjer/thistle.

The male’s song is a rapid medley of twittering notes, lasting up to 10 seconds.

Lawrence’s Goldfinches are one of the most beautiful finches in California.

Interestingly, these birds are highly nomadic due to the fact they live in extremely arid areas. They move around constantly looking for places that provide food and water.

Lawrence’s Goldfinches don’t get their yellow breeding feathers through molting (like most birds). Rather, the feathers become yellower as they wear, shedding their brownish color and exposing yellow parts of the feather beneath. No other goldfinches acquire breeding plumage in this manner.

Lawrence’s Goldfinches are sometimes attracted to feeders. Your best bet is to fill them with Nyjer or shelled sunflower seeds.

Listen below as the male Lawrence’s Goldfinch sings several high-pitched notes mixed with some of their call notes. Typically they are musical than other finches, and they can often imitate other birds.

These finches are found at high elevations in California!

Look for them high on mountains or cliffs where they forage on loose stones, glaciers, meadows, and even avalanche areas. They even nest on the slopes of Mt. McKinley, which is the highest peak in North America. 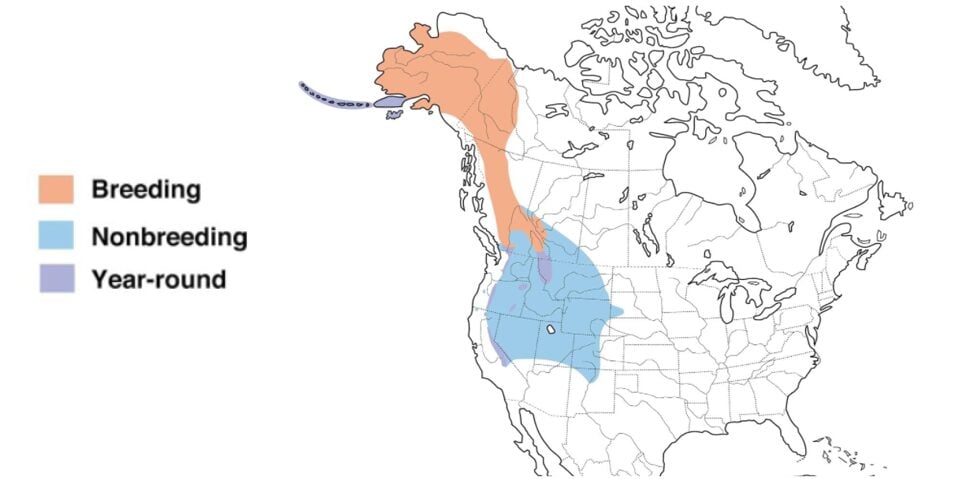 Gray-crowned Rosy-Finches may visit backyard bird feeders in the winter when they come down a bit from the mountains. They like to eat black oil sunflower seed scattered on the ground or platform feeders.

Black Rosy-Finches are incredibly unique birds. To find them in summer, you will need to head above the treeline. They nest on the sides of cliffs and other mountainous areas where few people ever travel.

In winter, they come down from the mountains a bit to escape the cold. They form large flocks and are found roosting together in caves, mineshafts, and inside barns.

Black Rosy-Finches will even visit bird feeders in California during winter! To attract them, try offering sunflower and Nyjer seeds on platform feeders or scattering them on the ground.

Black Rosy-Finches do not have a song, but they give low cheep note calls.

Which of these finches have you seen before in California?