What kinds of finches can you find in Iowa?

Luckily, almost all of them will visit bird feeders, so you have a good chance of attracting multiple types of finches to your yard. If you’re lucky, you may even see a finch at my bird feeding station right now! I have a LIVE high-definition camera watching my bird feeders 24/7. 🙂

Did you know 11 types of finches live in Iowa?

These small and colorful finches are relatively common in Iowa.

And luckily, American Goldfinches are fairly easy to attract to bird feeders! Try offering their favorite foods, sunflower kernels and Nyjer seed, which not many other birds eat.

It’s also helpful to include bird feeders specially designed for goldfinches. These small birds are easily scared off by larger “bullies.” They will appreciate having places that only they can use! I like the fact they can feed in any position, even upside down.

Because of their diet, American Goldfinches breed later than other birds. They wait until June or July, when most plants are in full seed production, ensuring there is enough food for them to feed their babies.

It’s common to see House Finches in Iowa near people.

Pine Siskins feed at backyard feeders normally in the winter. They prefer to eat smaller seeds without tough shells, such as sunflower or Nyjer seeds.   Pine Siskins are typically found in mixed evergreen or deciduous forests, but they will move to a new place in search of food, like weedy fields, backyards, or gardens.

Listen below to Pine Siskin’s song, which is a twittering warble that rises and falls in pitch. They randomly throw in a “ZZZzzzzzreeee” that rises in pitch ever so often. You will notice they sound more wheezy than other finches in Iowa.

Evening Grosbeaks are one of the largest finches in Iowa.

Typically, they are found in the northern coniferous forests, and in winter, they can be found pretty much anywhere as they search for food.   Evening Grosbeaks are known for their large and strong bill. They use these bills to crack open large seeds that other birds are unable to open.

Evening Grosbeaks are one of the few finches in Iowa without a song. But they do have some simple calls, including sweet, piercing notes and burry chirps, which you can hear below!

As their name suggests, Red Crossbills have crisscrossed bills, similar to if you cross your fingers. They adapted these oddly shaped bills to help them break into tightly closed cones, giving them an advantage over other finch species in Iowa.

They are found in large coniferous forests during their breeding season, especially spruce, pine, Douglas-fir, hemlock, or larch with recent cone crops. But in winter, they wander wherever they need to go to find food. While not incredibly common, they will sometimes visit bird feeders and eat sunflower seeds.

Red Crossbills are very dependent on conifer seeds. In fact, they even feed them to their babies instead of insects like most other songbirds. These finches typically breed in late summer but can actually breed any time during the year if a large enough cone crop is available.

Male Purple Finches are beautiful and have been described as having looked like they were dipped in raspberry juice.

Purple Finches have a big beak and tongue to crush seeds and extract the nut. This is good news because they will also visit bird feeders! Your best chance to attract them is using black-oil sunflower seeds. Having conifer trees in your yard is also a great way to encourage these finches to visit.

Purple Finches can be challenging to identify because they look incredibly similar to the more common House Finch. I know that I’ve made this mistake many times, hoping that I saw a Purple Finch when it was, in fact, just another House Finch. To tell them apart, look at their back, as Purple Finches have red coloring on it, where the back of a House Finch has none.

Similar to other finches in Iowa, males sing a rich, musical warble. Listen below!

It’s easy to see how these beautiful finches got their name. One look at the males, and you will immediately notice the bright red plumage at the top of their white breasts. Females, on the other hand, can be hard to properly identify, as they look similar to many other birds.

Rose-breasted Grosbeaks like to visit bird feeders, where it uses its huge triangular bill to crack open seeds. If you want to attract them, the best food to use is sunflower seeds set out on a platform feeder. I’ve never seen one of these finches use a tube feeder, as I don’t think it provides enough space on the perches for them.

Red-Breasted Grosbeak males sing to establish territories and attract females. When the female shows up, the male will sometimes play hard to get, rejecting her for a day or two before finally accepting her as a mate! To make up for this, they give the female a break and sit on the nest to keep the eggs warm.

Red-Breasted Grosbeaks are known for their beautiful song. It sounds similar to an American Robin but better! Listen for a long series of notes that rises and falls. If you hear one, make sure to look for the male singing from an elevated perch.

Blue Grosbeaks like to eat seeds and grains at bird feeders in shrubby backyards because they feel more protected. You will normally hear them singing before you see them.

Blue Grosbeaks are very shy, especially around humans, which makes them very difficult to observe. Interestingly, both males and females have a weird habit of twitching their tails sideways, although the reason for this behavior is unknown.

Blue grosbeaks have also been known to “sidle”, where they walk sideways along branches, as seen in parrots.   Listen below as the male Blue Grosbeak sings a musical warble that lasts for 2 or 3 seconds. 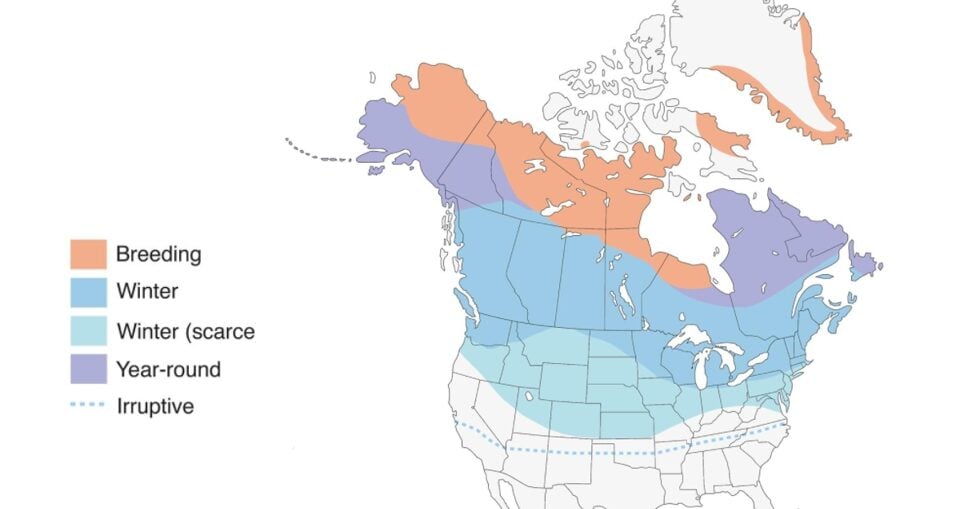 Like many finches in Iowa, Common Redpolls have a rollercoaster-like flying style.

Redpolls travel in flocks of up to several hundred birds. They move very fast, gathering seeds in weedy fields or small trees one minute and swirling away in a mass of chattering birds the next. Listen below to the Redpoll song, which is a combination of single or repeated calls (“chit-chit-chit-chit”). Their call notes are a whistle that sounds like “swee-ee-eet.”

Male Cassin’s get the red on the top of their head from eating colorful foods like the orange berries of firethorn plants.

Cassin’s Finches visit feeders in the winter that provide sunflower seeds. They also like shrubs with fruit such as mulberry, firethorn, or grape bushes. Interestingly, they crave salt and are often found visiting deposits of minerals on the ground.   Their songs tend to imitate other birds, and both males and females sing. Listen below as a male Cassin’s Finch sings a joyful song with a fast series of short sounds.

White-winged Crossbills get their name from the shape of their bill! These finches evolved these unique beaks to open up pine cones, so they can eat the seeds inside.

In fact, some people are able to locate crossbills by hearing them crunching while opening cones in the trees.

You can sometimes attract these finches to backyard feeders in Iowaby offering hulled sunflower seeds.

Which of these finches have you seen before in Iowa?