What kinds of finches can you find in Manitoba?

Did you know 11 types of finches live in Manitoba?

These small and colorful finches are relatively common in Manitoba.

American Goldfinches are strict vegetarians. Their diet is exclusively made of seeds with no insects, which is rare in the bird world. So naturally, they feast on seeds from asters, thistles, sunflowers, grasses, and many types of trees.

Listen below to Pine Siskin’s song, a twittering warble that rises and falls in pitch. They randomly throw in a “ZZZzzzzzreeee” that rises in pitch ever so often. You will notice they sound more wheezy than other finches in Manitoba.

Evening Grosbeaks are one of the largest finches in Manitoba.

Evening Grosbeaks are one of the few finches in Manitoba without a song. But they do have some simple calls, including sweet, piercing notes and burry chirps, which you can hear below!

As their name suggests, Red Crossbills have crisscrossed bills, similar to if you cross your fingers. They adapted these oddly shaped bills to help them break into tightly closed cones, giving them an advantage over other finch species in Manitoba.

Similar to other finches in Manitoba, males sing a rich, musical warble. Listen below!

It’s easy to see how these beautiful finches got their name. One look at the males, and you’ll immediately notice the bright red plumage topping their white breasts. On the other hand, females can be hard to identify, as they look similar to many other birds.

Rose-breasted Grosbeaks like to visit bird feeders, where it uses its huge triangular bill to crack open seeds. I’ve never seen one of these finches use a tube feeder; I don’t think the perches provide enough space for them. The best food to use is sunflower seeds set out on a platform feeder if you want to attract them.

Rose-breasted Grosbeak males sing to establish territories and attract females. Unfortunately, when the female shows up, the male sometimes plays hard-to-get, rejecting her for a day or two before finally accepting her as a mate! They give the female a break and sit on the nest to keep the eggs warm to make up for this.

Rose-breasted Grosbeaks are known for their beautiful song. It sounds similar to an American Robin but better! Listen for a long series of notes that rise and fall. If you hear one, make sure to look for the male singing from an elevated perch.

Like many finches in Manitoba, Common Redpolls have a rollercoaster-like flying style.

You can sometimes attract these finches to backyard feeders in Manitoba by offering hulled sunflower seeds.

Pine Grosbeaks are one of the largest finches in Manitoba!

The Hoary Redpoll breeds in the arctic tundra and can live and survive in freezing winter weather. Most people never see these finches because not much civilization exists in the places they live. They get their name from the way they look: “hoary” is for the frosty plumage, and “redpoll” refers to the red patch on their head.

These finches are rare visitors to bird feeders in Manitoba since they spend summers up north. However, Hoary Redpolls come south when the weather turns cold, and food availability is scarce. If you’re extremely lucky, you may spot one visiting your yard eating Nyjer seeds or black-oil sunflower seeds.

Redpolls can store seeds in pouches in their throat, kind of like a chipmunk stashing seeds in their cheeks. This lets them quickly collect seeds, then regurgitate them for husking and eating when they’re back in a sheltered and safe spot.

These finches are found at high elevations in Manitoba! 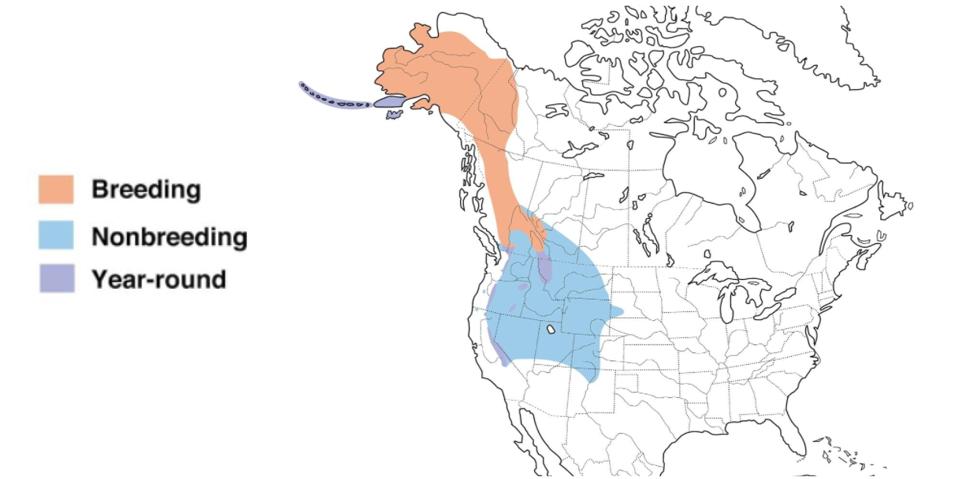 Which of these finches have you seen before in Manitoba?