Do you want to learn about the different frogs in Austria?

If so, you’ve come to the right place! In the article below, I have listed the frogs you can expect to see. For each species, you’ll find out how to identify that frog correctly, along with pictures, interesting facts, and RANGE MAPS!

Here are the 8 types of frogs that live in Austria:

The Common Tree Frog has an interesting talent; it’s a bit of a meteorologist! Believe it or not, these bright green frogs were once used to determine if it was going to rain. They often croak loudly when storms draw near because they can sense the change in air pressure. 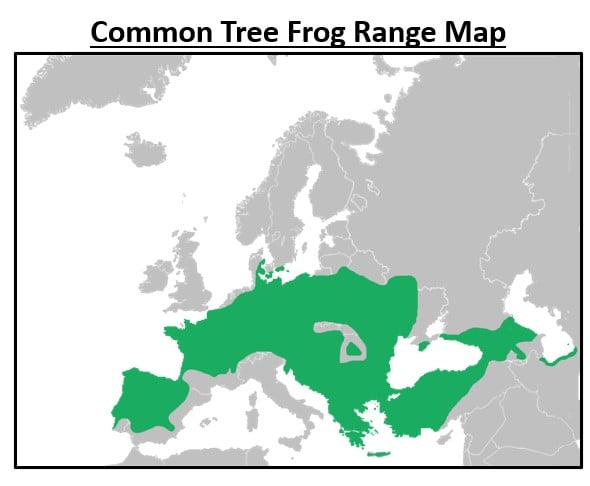 There are only a few species of tree frog in Austria.

Unfortunately, it can be hard to tell them apart because they all look very similar, but the Common Tree Frog is the most widespread species.

You can identify it by its bright green coloring or listen for its metallic, high-pitched croaks. This little frog is so loud it can be heard from as far away as a kilometer or more!

The Common Frog is the most widespread frog in Austria.

It lives in nearly every habitat with stagnant water, including ponds, ditches, flooded meadows, and swamps. So if you have a pond in your garden, this species is most likely using it. 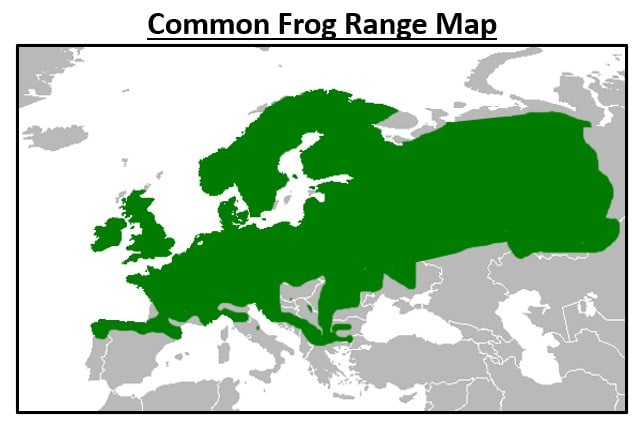 Common Frogs breed explosively, meaning that hundreds of these frogs gather together and breed simultaneously. As a result, it’s not uncommon to see the bottom of entire ponds covered in frog eggs during the breeding season.

Their unusual breeding strategy means young frogs emerge in unbelievable numbers during late summer. However, some late-hatching tadpoles hibernate over winter and emerge the following spring instead.

If you happen to see a male Moor Frog during its breeding season, you won’t mistake it for any other species. These fascinating creatures turn bright blue to advertise when they’re ready to mate! It’s incredible to see a usually plain frog take on such vivid colors. 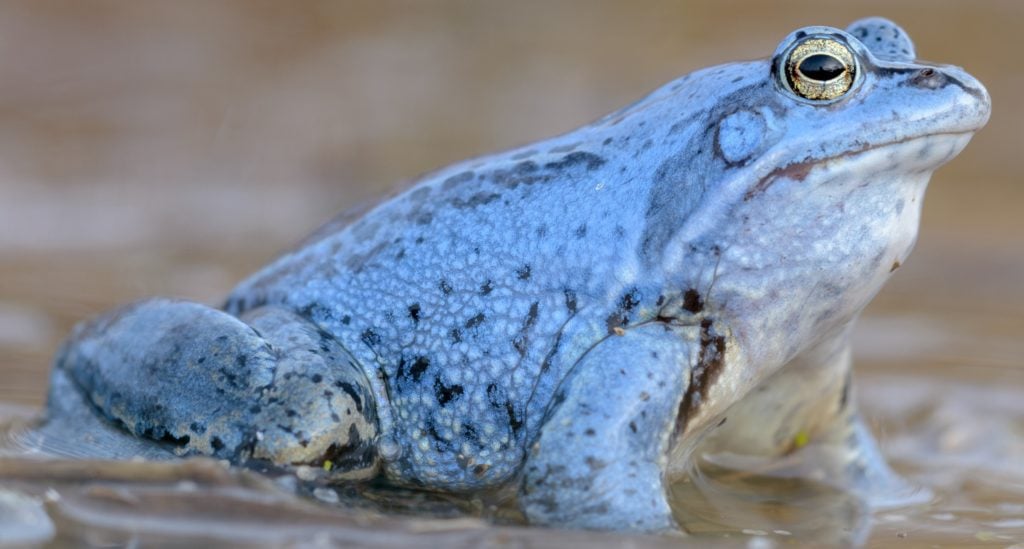 Although they’re less colorful outside the breeding season, Moor Frogs in Austria are relatively easy to find. They spend most of their time on land and are active during the day. Plus, they’re not as skittish as other species, so it’s easy to get a good look.

Moor Frogs inhabit moors, as their name suggests, but can also be found in flooded meadows, lakes, and temporary water sources. 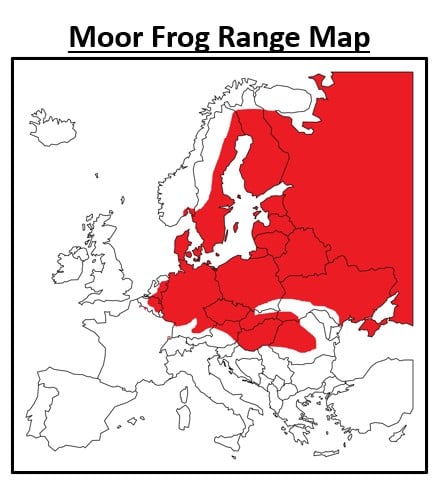 The Agile Frog is one species that has EARNED its common name. This large, light-colored frog can leap incredible distances when disturbed. It’s known to cover up to two meters in a single bound! 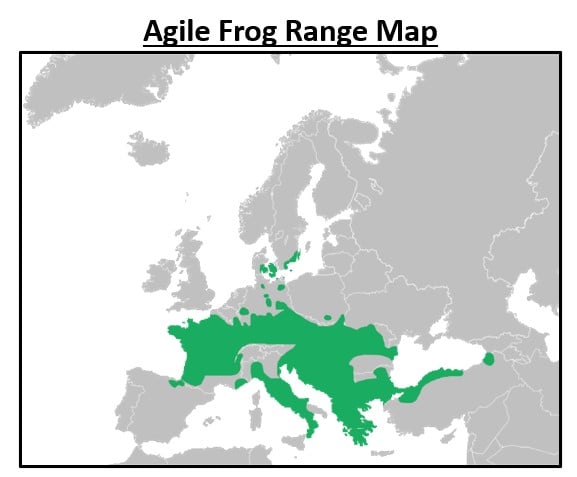 Look for Agile Frogs in Austria on land near ditches, ponds, and flooded meadows. They are active day and night and spend most of their time hunting for beetles, their main food source.

To recognize this species’ distinct call, listen for a five- to ten-second, high-pitched cry. It often calls in a series, with each note becoming longer, higher-pitched, and further spaced.

Pool Frogs are named for their preference for very small bodies of water. Although they’re found in ponds, you’ll have more luck looking for this species in flooded ditches, collections of rainwater, and even wheel ruts on dirt roads. 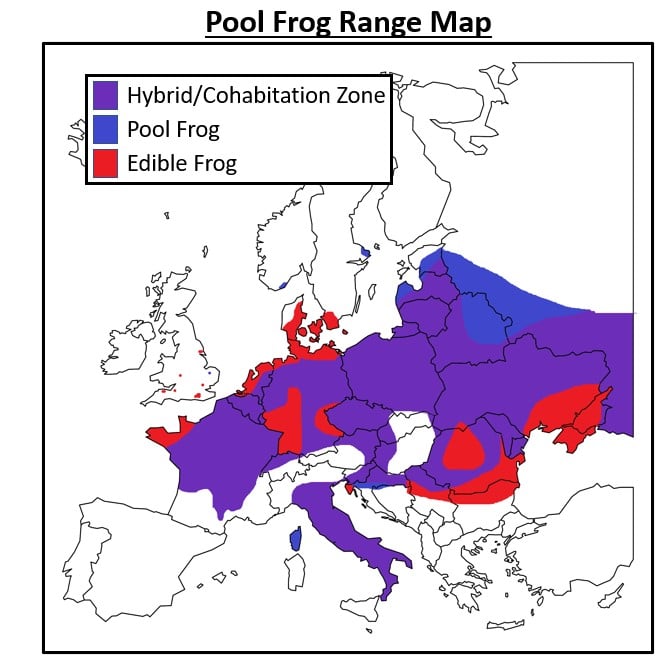 This aquatic species is active at night and during the day, and it loves the sun and spends much of its time out in the open. They forage after sunset when insects come out. Pool Frogs typically hibernate on land during cold weather. However, some individuals spend the winter underwater.

The Pool Frog has a very distinctive call that lasts for several seconds. It’s a loud rattling noise that alternates with a flat rasping. They also make a short squeaking noise to advertise their territory.

The Edible Frog has the most fascinating origin of any frog in Austria.

Although the process is much more complex, in short, this species is the result of a hybrid between two frog species that then uses cloning to reproduce!

I know this seems like science fiction! The fertile female offspring of a Pool Frog and a Marsh Frog can reproduce without using any of the breeding male’s genetic material. So, in essence, she produces clones of herself with the same DNA. Click here to read more about this interesting process called Gynogenesis.

As you may have guessed by its name, this frog is the one used to make the French delicacy of frog legs. Personally, I prefer to observe them in the wild rather than in a kitchen. 🙂

Look for Marsh Frogs in Austria in deep ponds, lakes, and larger rivers.

These large, loud frogs are hard to miss! 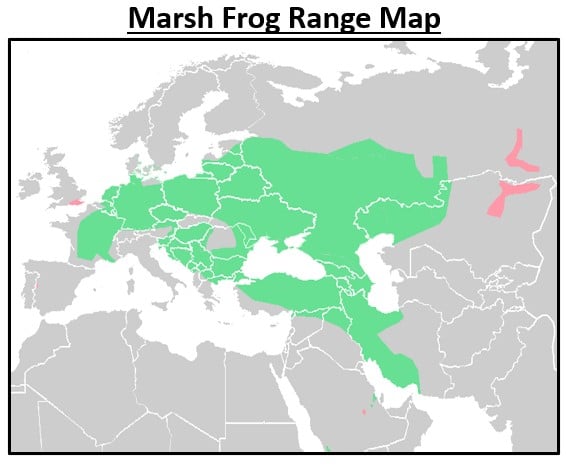 Although you shouldn’t have trouble spotting a Marsh Frog, you might have a harder time identifying one. This is because it’s often confused with its close relatives, the Graf’s Hybrid Frog and the Iberian Water Frog. The Marsh Frog is the largest of the three, but the best way to differentiate these species is by your location.

You can also listen for the Marsh Frog’s distinctive voice, a series of evenly spaced metallic squeaks.

The American Bullfrog is the largest frog in Austria!

But, as its name suggests, it’s not a native resident. Instead, the American Bullfrog was introduced to Austria, most likely as an escaped pet. Fortunately, this species doesn’t pose as much risk to native frogs because it prefers deeper water, but its voracious appetite can cause problems for local ecosystems. 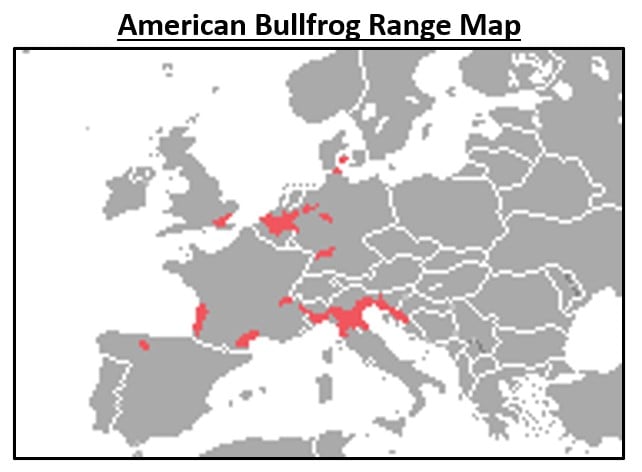 Look for Bullfrogs in swamps, ponds, and lakes. These large, aggressive frogs will eat just about anything they can fit in their mouth and swallow! The list of prey includes other frogs, fish, turtles, small birds, bats, rodents, insects, crustaceans, and worms. I have personally witnessed one even trying to eat a baby duck!

They’re named for their deep call, which is thought to sound like a bull bellowing.

If you need additional help identifying frogs in Austria, check out this field guide! 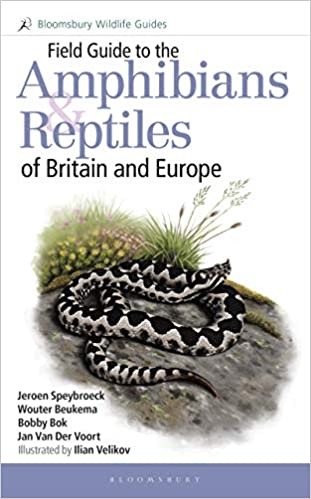 Do you want to learn more about animals in Austria?

Check out these other ID Guides!

Which of these frogs have you seen before in Austria?