The Northern Cardinal (Cardinalis cardinalis) is one of the most familiar and easily recognizable birds in North America!

And it’s easy to see why!

Cardinals have an incredible combination of being easy to see in your backyard AND breathtaking plumage. In my opinion, the Northern Cardinal can be credited with drawing more people into the hobby of bird feeding and birding than any other species.

But these fascinating birds have much more to their story than pretty feathers!

From sports teams to state birds to being dedicated parents and partners,

This post will detail 20 fun and interesting facts about Northern Cardinals!

Cardinals are typically the first bird to visit feeders in the morning and the last to visit in the evenings.

While ornithologists aren’t entirely sure why this is the case, they believe it may be related to lower competition with other birds at the feeders during dawn and dusk. Males may also appear more inconspicuous in low light conditions providing them some security from natural predators.

You may be able to observe cardinals RIGHT NOW on my bird feeders!

Here is a LIVE view of my feeding station:

*Watch all of my LIVE cams HERE!

The Northern Cardinal’s name dates back to the time of the United States founding colonists, stemming from the similarity of the males’ vibrant red plumage to the red biretta and vestments of distinguishable Catholic cardinals.

Northern Cardinals are classified as granivorous animals because they live on a diet consisting of mostly seeds. Their short, stout, cone-shaped beaks are specially designed to crack open the hulls on seeds and shells on nuts. 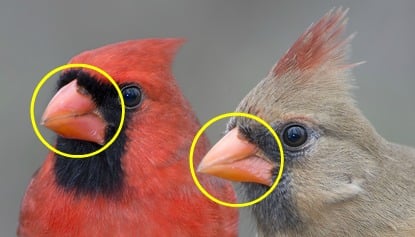 Due to their love of seeds, you can easily attract cardinals to your feeders by using either sunflower seeds (their favorite!), safflower seeds, cracked corn, or shelled peanuts.

During courtship, affection is expressed by the males feeding their females seeds in a method known as “beak to beak.” If you choose to let your imagination run wild, you could certainly say that the birds look like they are kissing!

Occasionally, a lack of the typical red pigment in the plumage occurs and is replaced by vibrant yellow or orangish pigments, which results in a yellow cardinal. The appearance of vibrant yellow Northern Cardinals is typically caused by a genetic plumage variation called xanthochroism. 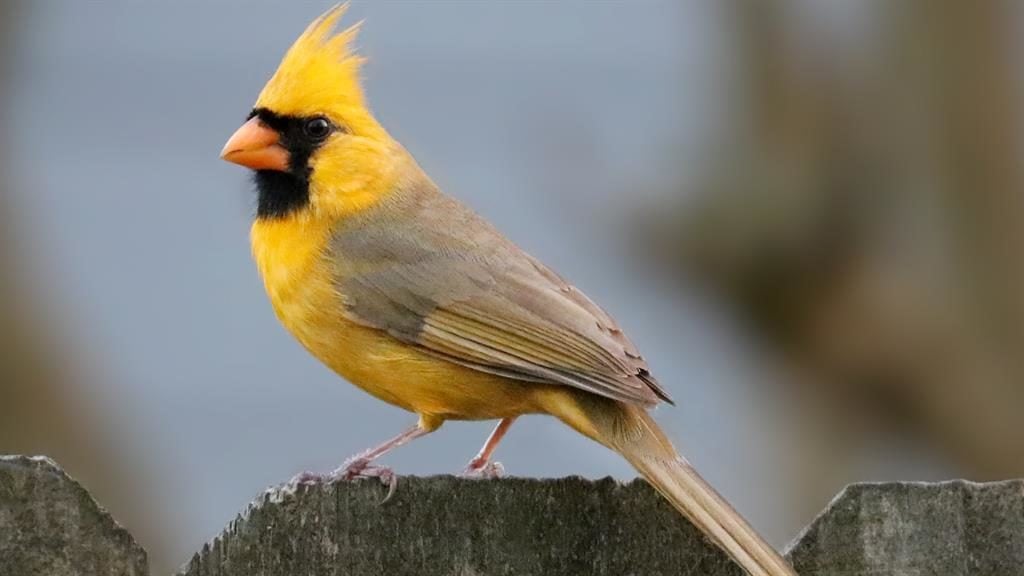 It’s incredibly rare to see a yellow cardinal, but when it happens, it becomes a national news story for bird lovers!

The average lifespan of a Northern Cardinal is approximately three years due to the hazards they face, which include predators, disease, accidents, and starvation

But the oldest recorded wild Northern Cardinal lived to be 15 years and 9 months. This female was banded as a young bird and tracked in Pennsylvania.

The Northern Cardinal is a popular mascot for many sports teams!

Unfortunately, the cardinal is often portrayed incorrectly on logos, such as displaying a yellow beak or legs.

In the winter months, Northern Cardinals forego their territorial ways and congregate together to form flocks. A group looking for food collectively is more successful than a single cardinal or pair. These flocks can be called a college, conclave, deck, radiance, or Vatican of cardinals.

Check out this video that was taken at my bird feeding station.

Only in winter will you see this many male cardinals visiting at once!

The Northern Cardinal’s song sounds as if they are saying “birdie, birdie, birdie” or “cheer, cheer, cheer.” This distinctive vocalization pattern allows many birders to easily identify the cardinal when it’s singing.

Concurrent with the mating/nesting season, male Northern Cardinals experience a marked increase in hormone levels. At this time they become very territorial and will attack any intruders they feel are a threat to the brood.

While amusing to onlookers, it isn’t unusual for them to violently and incessantly “battle” with their own image for hours in windows, mirrors, or anything that has a reflection. 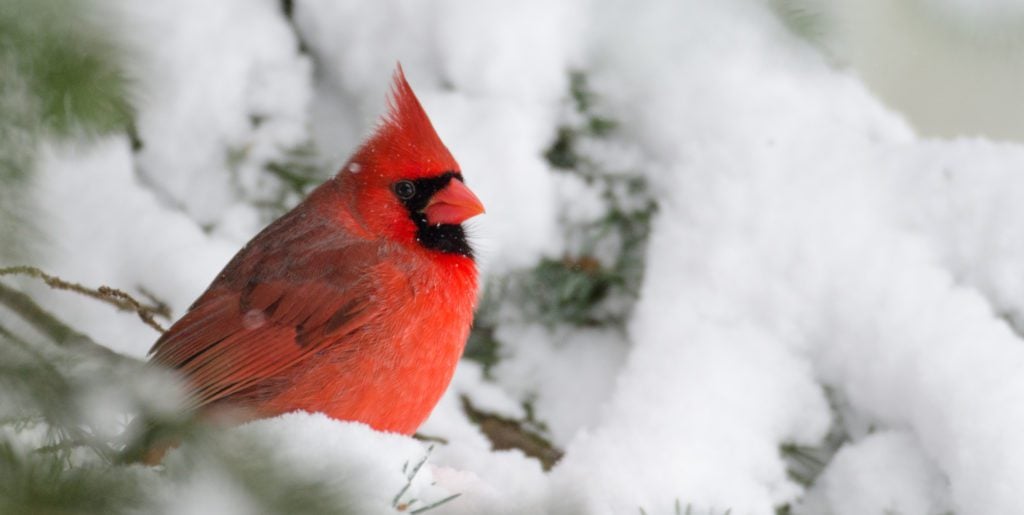 “Northern” refers to the worldwide locale of the birds’ range of habitat. Of all three cardinal species belonging to the Cardinalis genus (Vermillion, Northern, and Pyrrhuloxia), Northern Cardinals are found in the northernmost regions.

Contradictory to many other songbirds, Northern Cardinals are mostly a non-migratory species, opting to overwinter in their chosen spring/summer habitat.

Many migratory birds move to warmer climates in the winter as they depend on insects or fruit for sustenance and their food supply drops in the colder, winter months. The diet of Northern Cardinals consists mainly of seeds and nuts, allowing them to forage for food year round.

Yellow, orange, or red pigments found naturally in plants are responsible for the characteristic red coloration exhibited in the feathers of male birds. These pigments, known as carotenoids, cannot be manufactured within the bird’s body but must be ingested by eating plant material containing the pigments or insects that have fed on colorful plants themselves.

Northern cardinals are monogamous, and pairs stay together year round. 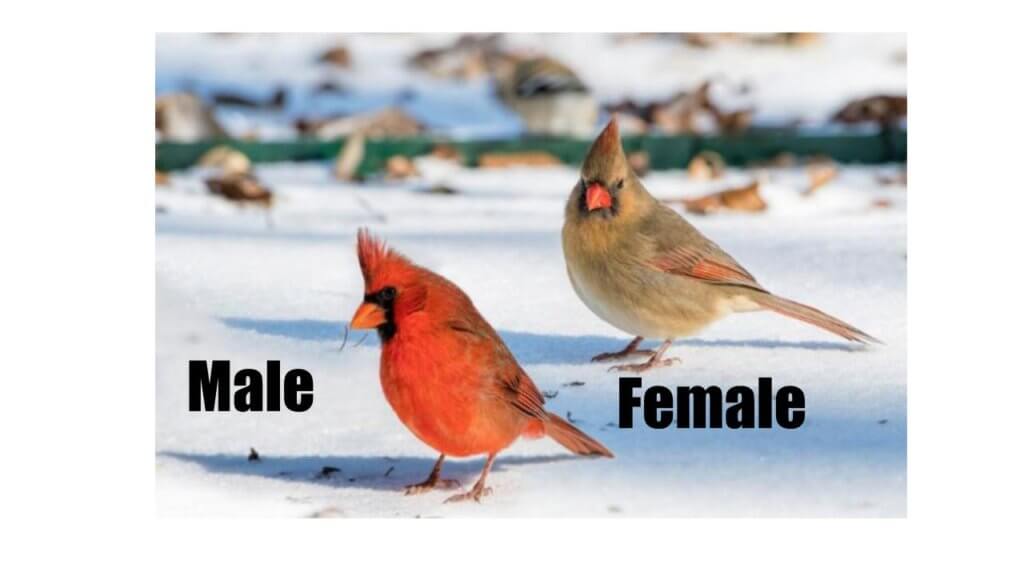 After a brood of eggs has been laid in the nest, the female mainly performs the incubation. During this time the male of the mated pair expends his energy defending the nesting territory from intruders and bringing food to his female.

Once the eggs have hatched, both male and female cardinals take on the responsibility of feeding their nestlings. When a subsequent brood is laid, the male shoulders the job of raising fledglings (if they are still present) so the female can once again focus on incubating her eggs.

Unlike many species of songbirds where only the male sex can vocalize, both male and female Northern Cardinals can sing. Females are known to sing when they are in the nest, as a way of signaling their mate to bring food; males, on the other hand, sing during courtship and to defend their nesting territory.

Female cardinals express themselves using more elaborate songs than males and may sing up to two dozen different tunes, depending on their location. Both male and female vocal patterns vary slightly based upon the region, just as dialects of languages appear depending upon the locale. 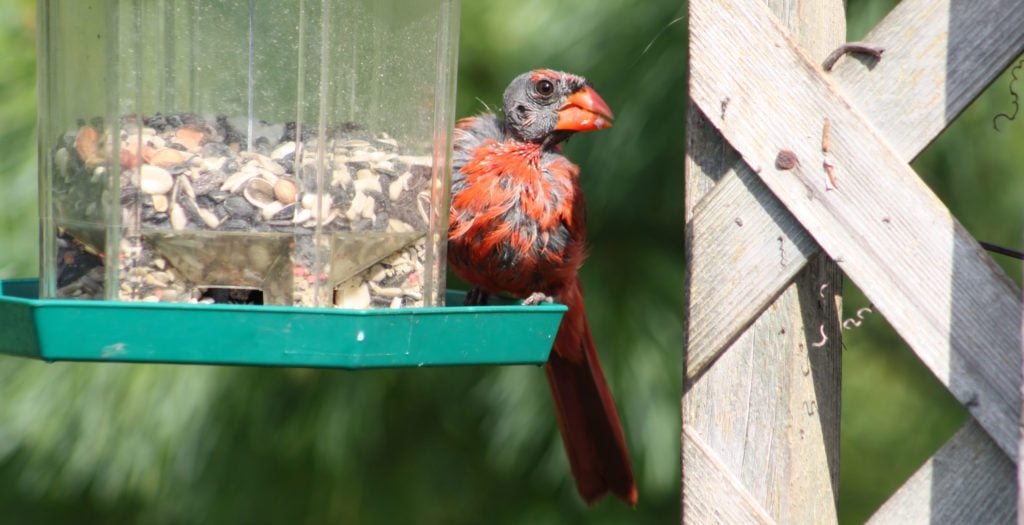 Cardinals molt at least once a year to replenish damaged feathers. During this process, they lose some or all of their feathers for a couple of weeks. Occasionally the birds look as if they have gone bald, showing the black or dark grey skin on their head when they are featherless.

The Northern Cardinal also has the distinct honor of being the bird on the logo for Bird Watching HQ!

I hope you enjoyed reading these fun and interesting facts about Northern Cardinals!

Is there anything you know about these birds you think is worth sharing?

If so, please let me know below!