One of my favorite native flowers is Joe Pye Weed.

In case you are unaware of Joe Pye Weed, it’s a gorgeous wildflower that grows up to 7 feet tall. When it’s in full bloom, it has a large plume of pinkish lavender flowers at the top that attracts many species of wildlife.

Please don’t let the fact that ‘weed’ appears in the name scare you away. Joe Pye Weed is definitely a flower you WANT in your backyard!

Many people have questions about Joe Pye Weed, such as how to grow, where to find, and if it’s a good fit in their backyard.

Today, I am going to answer all of your questions! Here is how the following post is organized:

What is Joe Pye Weed?

Joe Pye Weed is the common name for plants that are in the genus Eutrochium. These flowering plants are NATIVE to the United States and Canada, which means they are highly recommended to plant in your yard! This large plant grows up to seven feet tall and is recognizable by its large pink flower clusters at the end of long stems.

Joe Pye Weed is a perennial, which means that the plant will come back year after year. You just need to plant it once, and you can enjoy this beautiful flowering plant each and every summer!

Bloom Time: Look for the flowers to bloom each August.

Habitat: Joe Pye Weed grows naturally at the edges of woodlands and wet meadows. It does best when planted in partial shade.

There are 5 species of wild Eutrochium found in North America:

When you go shopping for Joe Pye Weed at your local garden center, you probably won’t find any of the wild species listed above. That’s OK, most of the options you will find at a store will be a cultivar of a wild variety.

Here is the Joe Pye Weed cultivar that is growing in my backyard:

‘Gateway’ is one of the most popular Joe Pye Weed varieties and common to find at many nurseries. I use this species at the back of my flower garden since it grows incredibly tall. It serves as a beautiful backdrop for the rest of my flowers!

Why should you grow Joe Pye Weed? 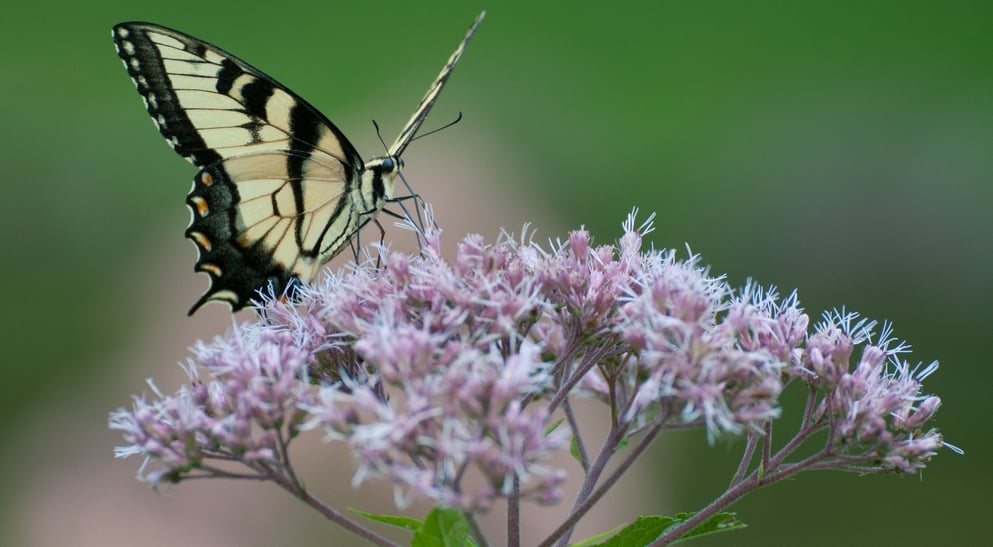 Joe Pye Weed, with its large clusters of tubular flowers, is an important native food source for wildlife. First, nectar-rich blooms attract a variety of bees and butterflies. The butterfly species that you can expect to see include skippers, fritillaries, and swallowtails.

Joe Pye Weed will also attract birds to your backyard. During the summer, it’s common to see hummingbirds sipping nectar from the flowers. Then once fall arrives, many birds, like the American Goldfinch, will feed on the seeds.

In addition, including tall plants like Joe Pye Weed provide shelter, cover, and protection, which can also encourage more songbirds to visit your garden.

Many native wildflowers (and their cultivated varieties) are important food sources for local birds and insects.

Native plants are also generally a more efficient and eco-friendly choice. Unlike domesticated varieties, native plants have evolved with your local climate and conditions. They’re well-suited to your area’s soil, temperature, and rainfall. They generally require less weeding, watering, and fertilizing than their cultivated counterparts.

3. It’s a Beautiful Addition to Your Flower Garden: 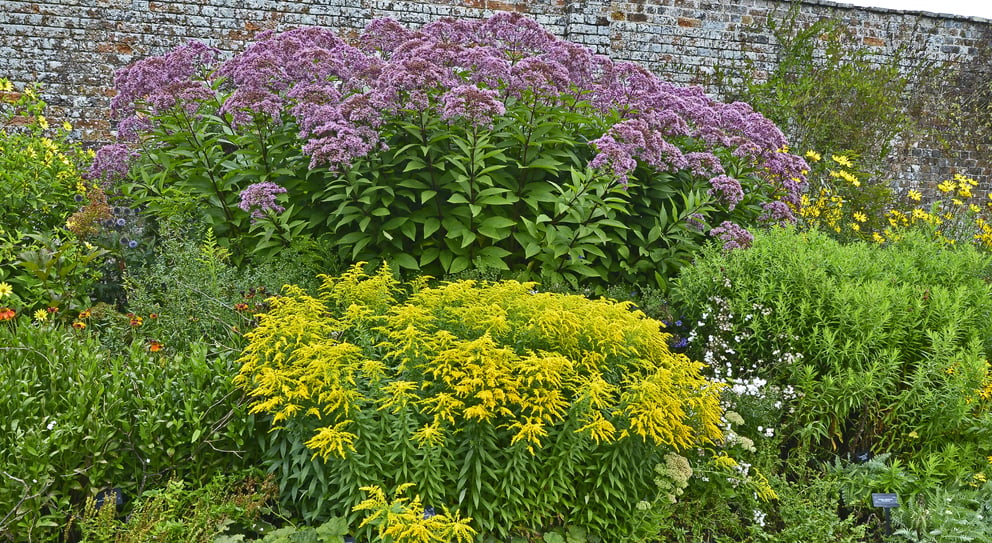 The tall plumes of Joe Pye Weed offer a stellar backdrop for other flowers. They don’t bloom until late summer or early fall, but their height means you can plant them behind smaller, earlier blooming varieties.

Joe Pye Weed is deer resistant and these mammals typically leave it untouched.

5. It Has Surprising Health Benefits:

According to folklore, Joe Pye Weed was named for a colonial-era Native American, Joe Pye, who used it to treat fevers and taught early colonists to use it to treat an outbreak of typhus.

While you probably won’t need to treat typhus, it’s a neat plant to have if you’re a history buff or interested in learning more about herbalism.

Please note that its medicinal value hasn’t been verified by modern science.

How do you grow Joe Pye Weed?

Joe Pye Weed is an incredibly hardy plant and can be grown in USDA plant hardiness zones 2-9. It thrives in partial shade to full sun. This native plant does best in moist areas, particularly along creeks, drainage ditches, and pond banks, but it can easily be grown in garden beds or along woodland edges in moist, fertile soil. 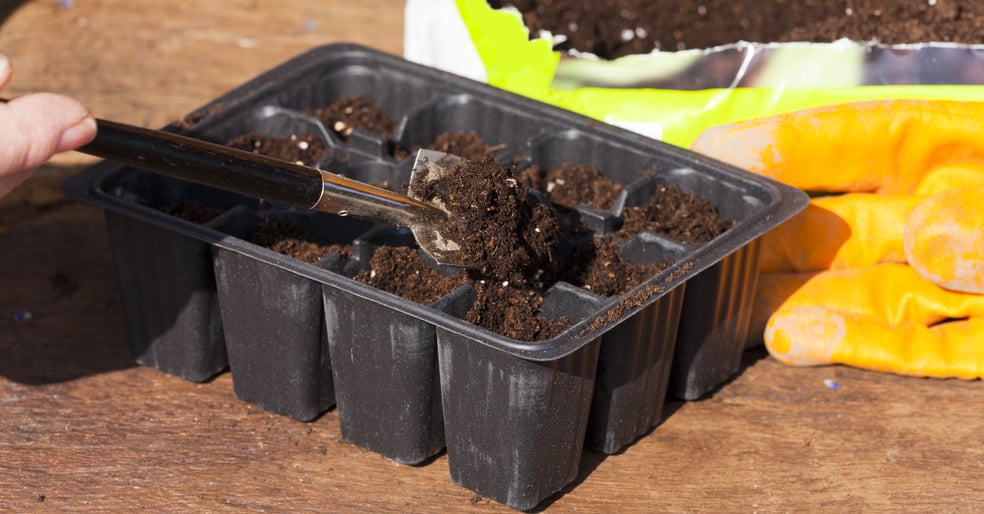 Joe Pye Weed is easy to start from seed. And once it’s established, it can spread quite easily, so keep this in mind when selecting a planting site.

To direct sow Joe Pye Weed, scatter seeds across the bed and lightly rake them in. Keep the soil moist until the ground freezes.

Alternatively, you can start the seeds indoors about five weeks before spring temperatures are consistently in the 50°Fs. Sow the seeds about 1/8 inch deep in containers of potting mix.

Keep the containers at around 70°F. Transplant your seedlings when they reach about 2 inches tall and plant them about 1 foot apart.

Proper watering for Joe Pye Weed is essential for it to thrive. Don’t allow the soil to stay dry for more than a few days. This advice is especially true while plants are getting established and during hot weather.

When watering, make sure you’re soaking the soil enough that the water is seeping down into the ground, and it’s not just the first inch that appears damp. To avoid evaporation, make sure to water in the early morning or evening.

Joe Pye Weed shouldn’t require a lot of fertilizing. To help it thrive, add compost to your garden before planting.

While pruning isn’t essential, you can cut the plants back to 4-8 inches in the spring. Joe Pye Weed blooms on the new season’s growth, so this won’t affect its flowering.

Mature Joe Pye Weed plants can be divided in the fall after they go dormant. Each plant has a crown with multiple stems. To divide a crown, use a sharp shovel to cut the roots in between the stems.

Plant the separated piece at the same depth it was originally and resettle the soil around the rest of the crown.

It can be devastating when pests and diseases impact your garden. Thankfully, Joe Pye Weed tends to be relatively free of most of these problems!

However, Joe Pye Weed is sometimes affected by a fungal disease called powdery mildew. You can recognize powdery mildew by the grayish-white splotches on both sides of the plant’s leaves. These blemishes can reduce the plant’s ability to photosynthesize and cause the leaves to dry up. 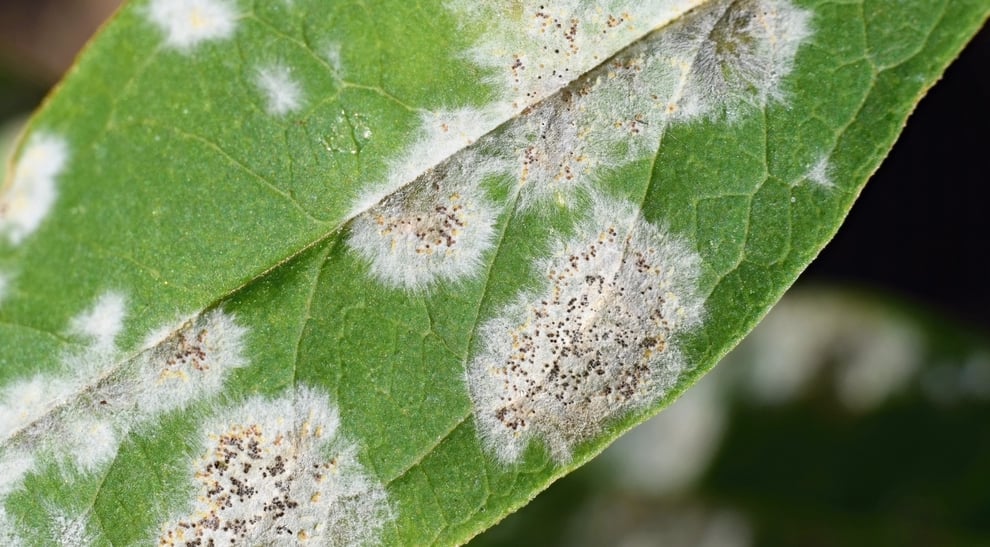 Powdery mildew can affect many plant species. It overwinters in the soil, and the spores spread to other plants in the wind. Powdery mildew thrives in high heat and humidity and shady areas with poor air circulation.

You can also help prevent powdery mildew by keeping your soil healthy. Make sure to use mulch, and add good quality compost at least once per year. You should also leave plenty of space between plants to allow for good air circulation.

Any plants that are killed by powdery mildew should be destroyed to avoid contaminating your compost or soil.

If your plants have powdery mildew, it can be treated. There are some commercial fungicides available. Alternatively, there are a few easy home remedies that usually do the trick.

The first is to make a mixture of milk and water, about 60% milk. Add the solution to a spray bottle and spray your plants once a week while the fungus is present. It’s not known exactly why this works, but most think that the milk proteins interact with the sun to create an antiseptic effect. Any fungi are destroyed, but the plant is not hurt. A milk spray works best when it’s used preventatively.

Here is a video that provides some other ways to prevent and treat powdery mildew:

Where can you find Joe Pye Weed?

There are THREE places you can typically obtain Joe Pye Weed:

Are you looking for a live plant instead of seeds? I was able to find some on this website.

I have had great luck finding this native plant at my local garden store. Since Joe Pye Weed doesn’t bloom until late summer, I have found that they don’t carry it until mid-summer. Please don’t panic if you can’t find any Joe Pye Weed in spring. Most nurseries rotate their offerings through the season to coordinate with bloom times.

If you have questions, then make sure to talk to a staff member or find another local expert, such as someone in a garden or butterfly club. Your local extension service may also be of assistance. To find the nearest one, click here.

Native varieties of Joe Pye Weed can often be found growing along roadsides and in wetland areas. If you’re feeling adventurous, you can collect your own seed from wild plants near your home. Be sure to ask for permission before going onto anyone’s property. 🙂

The foliage of Sweet Joe Pye Weed has a vanilla to apple scent when crushed. The flowers also have a vanilla scent which is a magnet for pollinators.

There are also several cultivars available.’ Gateway’ has dark red stems and dark purple or pink flowers. It’s prized for its vanilla-scented flowers. For folks with limited space,’ Baby Joe’ is a dwarf variety that reaches 3-4 feet. ‘Chocolate’ is a unique choice because it has dark leaves, maroon stems, and white flowers.

#1. Joe Pye Weed is sometimes referred to as trumpetweed because its flowers resemble little trumpets.

#2. Joe Pye Weed used to be part of the genus Eupatorium (now it has its own genus Eutrochium) which was named for Mithridates VI Eupator 132-63 B.C, King of Pontus. Some folklore suggests he used plants from this genus to build up his tolerance to poison.

#4. Herbalists today sometimes use Joe Pye Weed as a diuretic and to help pass kidney stones.

#5. Under optimum conditions, some varieties of Joe Pye Weed can reach 8 feet tall.

If you’re looking to add some native plants to your garden, consider Joe Pye Weed. It’s an autumn superstar that’s sure to attract butterflies, bees, hummingbirds, and songbirds to your garden.

Do you have Joe Pye Weed growing in your backyard?

Please comment below, and remember to mention where you live!