Finding kingsnakes in Florida can be difficult!

Today, you’re going to learn about the 4 types of kingsnakes in Florida!

In Florida, there are two different types of Mole Kingsnakes, which are both considered subspecies of the Yellow-bellied Kingsnake.

Mole Kingsnakes prefer open habitats in Florida near forest edges. These snakes are difficult to find since they spend most of their time underground in old animal burrows or under logs and rocks. You’re most likely to spot one crossing the road at night.

The nocturnal and secretive nature of these kingsnakes means that they rarely come into contact with people. They’re non-venomous but may shake their tail as a warning which can sound a bit like a rattlesnake when done in dry leaves. They’re generally quite docile but may bite if grabbed.

So how do you tell the difference between a dangerous coral snake and a harmless Scarlet Kingsnake in Florida?

The Short-tailed Kingsnake is so named because its tail comprises less than 10% of its total length! They’re a fossorial species, which means they’re highly adapted to burrowing and spending time underground. 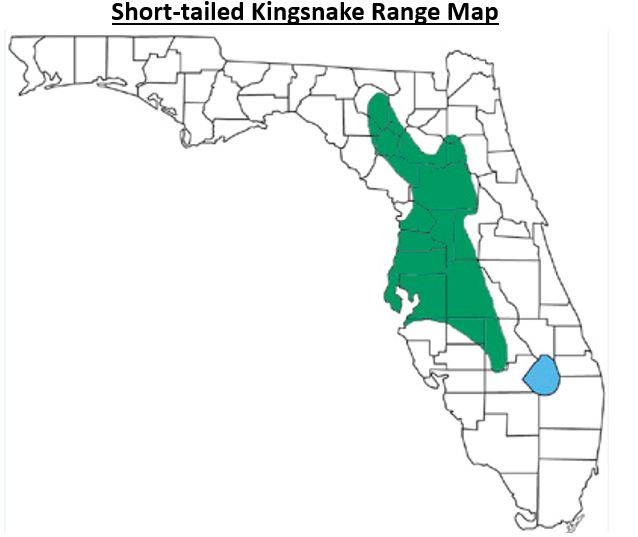 These little kingsnakes have specific habitat requirements and only live in sandy, upland parts of Florida. Look for them in pine or oak woodlands, coastal oak hammocks, or sand pine scrub. These snakes are incredibly hard to see and are very secretive.

The diet of the Short-tailed Kingsnake is limited as well. They feed almost entirely on small Black-crowned Snakes.

Though small, these snakes are known to be defensive when disturbed. They’ll often vibrate their tail, twitch their head, and may even hiss. If grabbed or pinned, they may strike.

Which of these kingsnakes have you seen before in Florida?