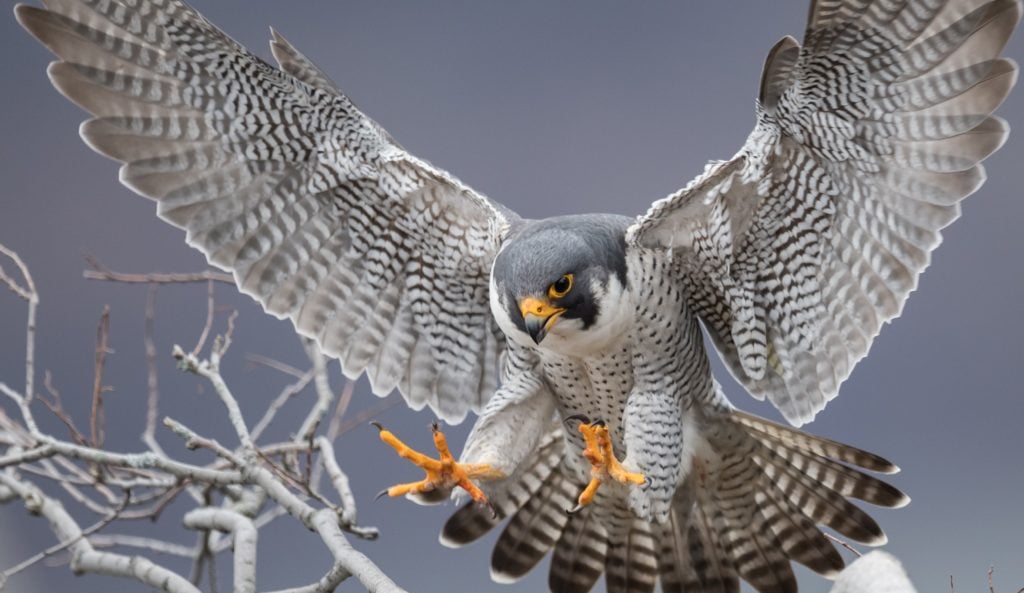 I know that I certainly do. It’s entertaining watching the interactions between falcons and their chicks. I also enjoy seeing the types of prey that are brought back to the nest.

But I must warn you, watching a falcon nest camera can be devastating. There are times when chicks that you have been observing since they were born die due to predation, starvation, illness, or some other reason. 🙁

I have found it can be a lot of work traveling to all corners of the internet, searching for the best live streams. So that is why I created this page.

Below, you will find 5 falcon cams from around the world!

I tried to include a description for each location, along with links to the appropriate places to learn more. All of the streams are embedded into this page, so you can watch all the cams without going anywhere. 🙂

Most of the cameras below feature Peregrine Falcons (except cam #7). One reason for this is that these birds are not that agitated by people and nest in cities high up on buildings.

You may also enjoy these other two pages that I put together:

*Remember to save this page as a FAVORITE and come back often. Also, if you notice that a link is not currently working, please send me an email to Scott@BirdWatchingHQ.com, and I will update it immediately!

This falcon cam is located at the campus of Charles Sturt University in Australia!

Unfortunately, this stream doesn’t allow external sites to embed the video. So you will have to go to Youtube to watch.

The camera was established in 2008 and monitors the daily lives of Peregrine Falcons. The video has helped show the breeding and natural behavior of the falcon family, which in turn supports conservation efforts for the species (Falco peregrinus macropus).

The above video is called the “ledge view” and looks out of the nest. During the day, you can see the CSU university lawn below the water tower at the campus and the trees that provide the falcons with feeding locations, cover, and shade. There is also another camera angle available that points toward the nest, which can be seen here.

Welcome to the home of Valentine and Flashback, who are Peregrine Falcons that live in France.

*Unfortunately, the link for this falcon camera changes often, so the video above is a recording. To watch the current live stream, click here to go to Youtube.

The nesting box and platform is located about 70 meters (230 feet) high towards the top of a church bell tower. Their favorite food tends to be pigeons that they hunt in the city.

Many birds are agitated by humans too close to their nesting site, but Peregrine Falcons can tolerate people better than most raptors. This is one reason they do so well reproducing in cities.

Many residents of Illkirch enjoy watching these falcons nest and raise their families, both online and with binoculars, cameras, or spotting scopes.

This Peregrine Falcon family is commonly referred to as the Great Spirit Bluff falcons due to their nesting site being located on the side of a cliff. Overlooking the Mississippi River, their nest box was built directly onto the cliff face!

The falcons are not present year-round, and generally return late February or early March to begin a courtship. The eggs are then laid between late March and early April. The eggs will hatch sometime in early to mid-May. After the eggs hatch, the babies will stay in the nest for about 40 days before fledging. The young still stay around their parents for a bit longer, finally dispersing to be on their own by late September.

The parents stick around their territory until late fall and then migrate south for the winter. Once the falcons migrate for the year, it is common for highlights to be playing on the above stream.

You are watching a remote camera located on Anacapa Island, which is part of Channel Islands National Park in California.

The nest is located next to the edge of a cave on a cliff, which makes an ideal nesting location for Peregrine Falcons. This falcon species naturally nest high up on the sides of cliffs, which is one reason so many of them decide to build nests on the edges of tall buildings in major cities.

An adult pair has nested here since 2013, successfully raising many chicks.

Historically, Peregrine Falcons were common among the eight islands in the park, but their numbers were decimated in the mid 20th century due to the dangerous pesticide DDT. After banning DDT and 30 years of conservation effort, Peregrine Falcons have rebuilt their population, and it’s estimated that at least 45 breeding pairs occupy the area.

This nest cam showcases the American Kestrel, which is the smallest and most common falcon in North America!

The nest box is attached to the side of a barn on private property in Wisconsin. The surrounding habitat is a mixture of grasslands and forests, which is perfect for kestrels.

American Kestrels are migratory and return each year to Wisconsin in February or March. Eggs are typically laid toward the end of April or early May and hatch 26-32 days later. Roughly 30 days after hatching, the young falcons will fledge from the nest for the first time. For the rest of summer, the immature kestrels remain near the nest and their parents before dispersing in late summer.

*During winter, when the kestrels have migrated, this cam is not online. During this time, I have included a video showing the juvenile kestrels fledging the nest.*

Do you have any falcon cam recommendations?

If you watch a particular falcon camera that you think would be a good fit, please let me know. I’m looking for streams that feature high-quality video that is clear and entertaining. It helps if the stream is on Youtube because then I can embed it on this page.