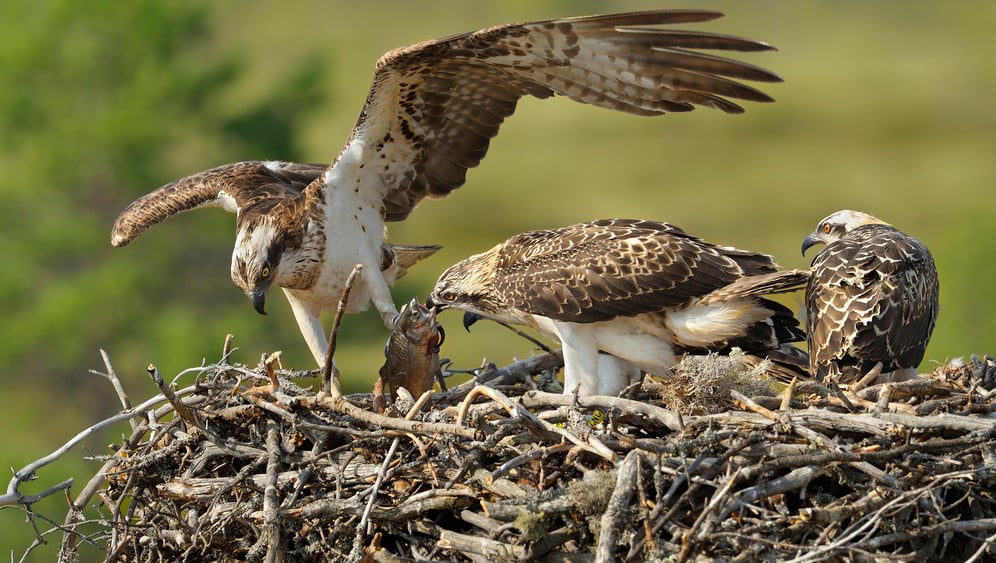 If so, then you have come to the right place!

I have searched the internet to find a collection of entertaining Osprey nest cameras, and then embedded all of the live streams into this page. Now you can come to one place to watch the drama that unfolds during each nesting season. (Make sure to save this page as a FAVORITE)

There are 7 Osprey cams featured below.

I do my best to keep the links updated, but sometimes the URL’s to live cameras change unexpectedly. If any of the osprey camera streams are not working, please send me an email, and I will fix – scott@birdwatchinghq.com.

If you’re interested, please scroll to the bottom to view Frequently Asked Questions. You can find answers to common questions, such as when the Osprey nests are most active.

There are 3 ways you can support BWHQ:

1. Save this page and visit OFTEN!

3. Check out one of my other LIVE camera pages:

This nest cam has been streaming since 2012 and features Rachel and Steve. Their nest is located atop a 30-foot tower on Hog Island, Maine.

Ospreys mate for life, and Rachel and Steve find each other every spring after spending their winters apart in Central and South America.

There has been a lot of drama over the years at this nest cam, such as when other birds of prey (Great-horned Owl & Bald Eagle) have snatched chicks from the nest. The predation has become so regular that the team at Hog Island has started to interfere by dressing up “mannequins” to help scare away the other raptors.

As you can see in the stream, this Osprey nest was built in a hectic location! It sits next to a parking lot, hospital, and highway, but that doesn’t stop the birds! They are

The female that uses this nest is named Iris because she has distinctive spots on the iris of her left eye. Interestingly, this nest used to be located on a power pole nearby, but that was dangerous because birds can get electrocuted and cause power outages. In 2007, the platform you see was erected, and the nest was moved to make it safer for the Ospreys. Iris accepted the new nesting platform with no problems.

This live Osprey camera is part of a long term study called the Montana Osprey Project, which is funded by the University of Montana and The Cornell Lab of Ornithology.

Tom and Audrey are the stars of this stream, which overlooks the Chesapeake Bay. The platform and camera were initially set up 16 years ago by a local family, nicknamed “The Crazy Osprey Family,” who used it as an educational resource for their daughter’s school.

You may see a few sticks with red ribbons tied to them in Audrey’s nest. This is because “The Crazy Osprey Family” ties ribbons around some of the sticks that they put out in their yard each year to see where they end up!

To learn more about the history of Tom and Audrey’s chicks, you can check out the Chesapeake Conservancy’s website, which has an excellent outline of years past.

This nest cam overlooks the Boulder County Fairgrounds in Longmont, Colorado. Ospreys originally started nesting here in 2003 on a light pole. Then in 2009, wildlife biologists moved the nest to its current position for safety reasons, and the Ospreys had no problem accepting the new location.

The birds have been successful in raising their chicks here. In 2016 one chick fledged, and in both 2017 and 2018, three chicks fledged.

Charlie and Charlotte are the stars of this nest in Charlo. (Try to say that three times fast!)

The nest is built on a raised platform that overlooks a beautiful field.

Don’t be surprised to see Great-horned Owls, either. They are frequent visitors to the nest during winter months. The owls seem to especially love the wooden perch.

Back in 2014, a pair of Ospreys built a nest on top of a sign at Achieva Credit Union in St. Petersburg, Florida. Unfortunately, the nest was destroyed after a bad storm, but that didn’t stop the Ospreys as they started building another nest in the same location.

The team at Achieva consulted a local Audubon Society chapter, fearing that the same fate would happen to the new nest. The chapter recommended that a nesting platform be constructed to provide a safe space for the birds.

The Ospreys had no problem moving into their new nest, which you can now watch in the above live stream.

This nest is located in southern Australia! More specifically, the nest is built on a barge at the entrance to a marina. Since there is no electricity, the security camera is powered by solar panels on the barge.

Unfortunately, this live stream tends to restart quite often, which makes it hard to embed on this page. To find the most current live video, please view this Youtube channel.

Since these Ospreys are located in the southern hemisphere, nesting season is the exact opposite of most of the other cameras on this page. For example, the eggs for these Ospreys typically hatch in September, which is spring in Australia.

These Ospreys don’t migrate either like the ones found in North America. Luckily, at this location, the hatchlings are incredibly safe from predators, but siblicide has been a large cause of death in years past.

This stream is a bit unreliable, so the best way to watch is to use this link that takes you to Youtube.

When are Osprey nests active?

Here is a general guideline of when you can expect to see birds on the cameras in the Northern Hemisphere and what to expect.

March: Adults migrate back from their wintering destinations.

May-June: The eggs hatch and the young are raised in the nest.

July-August: The juveniles fledge from the nest.

This is just a general timeline. The timing varies depending on location and year to year weather conditions.

For Eastern Ospreys that live in southern Australia, the timeline above is reversed since they live in the Southern Hemisphere. When it’s winter in North America, it’s summer for them.

What kind of nests do Ospreys build? 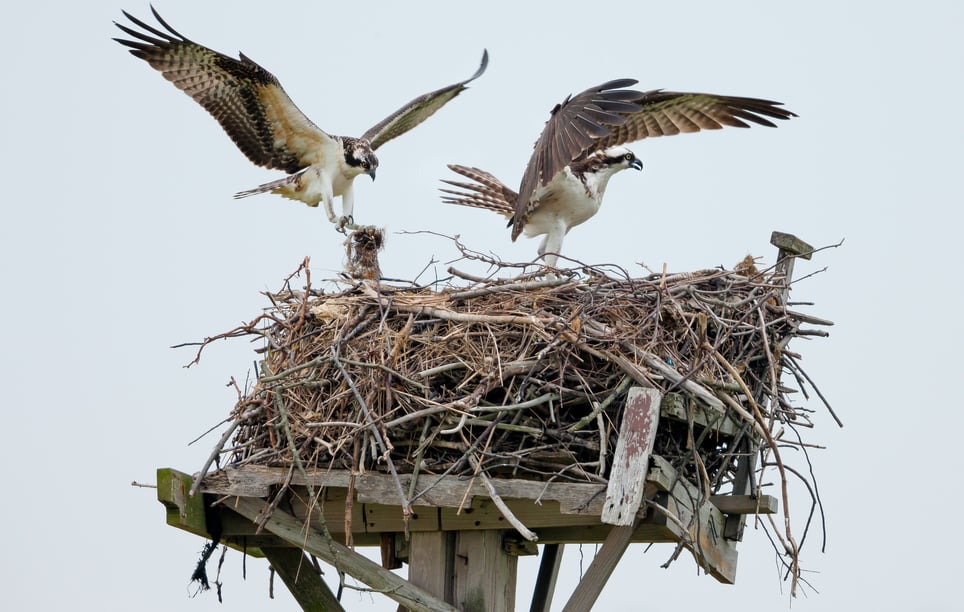 Ospreys like to nest high and have no problem using human-made structures. Many of the Osprey nests above are made directly on nesting platforms that were made by humans. These birds will also nest at the top of large trees, utility poles, and cliffs.

Both males and females help build the nest. Males are usually the ones that gather all the materials, while the females arrange everything to make the nest.

Osprey nests are built with sticks and then lined with anything from moss, bark, grass, and other suitable materials they can find.

Why do Ospreys always live near water?

These raptors are always near water because of their diet, which consists of almost 100 percent fish. Ospreys have specially adapted eyes that can detect fish below the water.

They also have closable nostrils that keep water out of their nose during dives for fish, dense and oily plumage, which helps keep their feathers from becoming waterlogged, and backward-facing scales on the talons which act as barbs to help hold the slippery fish they catch.

You need to watch this slow-motion video of an Osprey catching a fish!

Where are Ospreys located?

They are found on every continent except Antarctica.

The Ospreys found in the coastal regions of Australia are technically sub-species and are called Eastern Ospreys.

What do Ospreys eat?

Fish. Both from freshwater and saltwater.

Because their diet is almost 100 percent fish, Ospreys are also called “fish hawks.”

Do Ospreys mate for life?

Yes! What’s interesting is that most Ospreys migrate each winter to warmer weather. During that time, they lose their mate but find them once again when they return each breeding season.

What are the risks for young Ospreys?

Many risks can claim the lives of young Ospreys.

Starvation, weather, and predation by eagles and owls are some of the main dangers.

It’s also common for an egg to never hatch.

Ospreys make high-pitched, whistling calls, and there are two different types of sounds you can expect to hear.

The first call is a slow succession of chirps, which you can watch and hear below.

The second sound is an alarm call, which is a series of sounds that rise in intensity and then trail off.  The alarm call (which has been compared to a whistling tea kettle being taken off the stove) is typically given when a threat, such as an unfamiliar Osprey, approaches the nest.

Here is a good example of an alarm call. Make sure to listen to the end.

Yes, most of them do.

Ospreys from the United States and Canada migrate each winter to Central and South America. Still, it’s not uncommon to find a few Ospreys that stay in Florida, Texas, or California all year long.

Most Eastern Ospreys found around Australia do not migrate anywhere.

How many eggs do Ospreys lay?

The typical clutch size is three eggs. But Osprey chicks don’t hatch all at once, and the first chick can be born up to five days before the last one hatches.

The oldest chick can sometimes dominate the nest and take the majority of food, especially if food is scarce. In these cases, sometimes the youngest chicks die due to starvation.

How long does it take an Osprey to leave the nest? 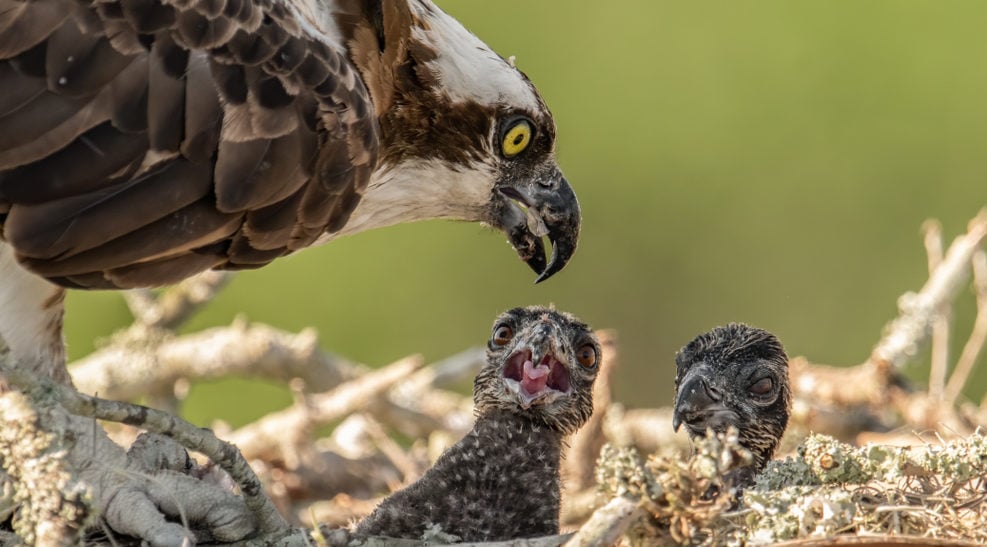 After hatching, it usually takes about 6-8 weeks for the juveniles to fledge and leave the nest.

How long do Ospreys live?

Their average lifespan is 15-20 years.