What do you call an otter that just got glasses? 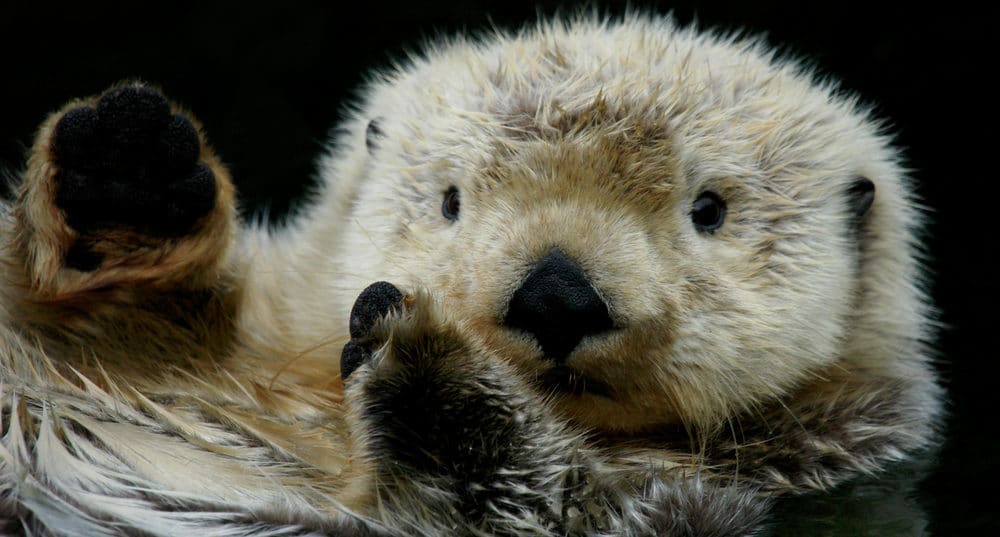 Today, you are going to learn about one of the cutest animals on the planet!

Get ready for 15 INTERESTING and FUN facts about sea otters!

Just to give you a warning, you are about to see a lot of adorable pictures! It’s perfectly OK to say “awwwww” as many times as needed, but please don’t actually hug your computer or phone. 🙂

Fact #1: There are THREE subspecies.

All sea otters have the same scientific name, which is Enhydra lutris. These marine mammals can be found along the eastern, northern, and parts of the western coast of the Pacific Ocean.

But there are actually THREE different sea otter subspecies:

Life expectancy for sea otters is typically 15-20 years, as long as a predator, habitat destruction, or something else doesn’t kill them first.

That fresh ocean seafood must be doing something right!

Sea otters eat a lot of food, typically about 20-30% of their body weight every day!

That is incredible. If a 200-pound man ate that much, it means he would consume about 50 pounds of food every day.

I’m just speculating, but a sea otter must poop a lot! I mean, there’s really nowhere else for it all to go, right?

In reality, sea otters eat so much because they have an incredibly high metabolism. The reason for this is that they need a lot of energy to keep warm in the cold ocean, especially since sea otters don’t have much body fat or blubber.

What surprised me the most was the fact that sea otters eat sea urchins! Yes, I am talking about those spiky creatures that you wouldn’t dare touch!

So how do they safely eat sea urchins?

Sea otters do what any of us would do if we had to open something with a hard, spiky shell. They smash them!

Sea otters either crush urchins against hard rocks to break open, or they get a small stone that is used as a hammer.

Fact #5: You won’t believe what they put under their arms!

Do you carry a reusable shopping bag to help save the environment?

Well, a sea otter would probably laugh at you, since they are the ultimate “green” shoppers.

Sea otters have folds of skin under each arm that act like built-in shopping bags. The purpose of these skin folds is so they can store clams and other food treasures they find while hunting.

Would you go to the store for one onion and then go home, return for a loaf of bread, go back home, and then come back for a carton of eggs?  No, you get as much as you can carry in one trip, just like the sea otter.

And sea otters also keep their favorite rocks in these skin folds to be used as hammers! As we have already learned, these marine mammals enjoy eating all sorts of hard invertebrates likes sea urchins and clams. And they typically get help opening these shelled critters be smashing them with rocks.

It’s almost as if sea otters have a built-in tool belt!

Fact #6: They think fur is better than fat!

Sea otters have the densest fur of any animal. On average, they have ONE MILLION hairs per square inch on their body. Compare that number to a human head, which only has about 100,000 follicles per square inch.

So why do sea otters need so much hair?

Well, they need the hair for warmth! Even though sea otters live in the cold, pacific ocean, they don’t have much body fat or blubber, especially when compared to other marine mammals. Without their dense hair, they would probably freeze to death.

Fact #7: They are great moms and have cute babies.

Sea otter mothers typically only have one pup at a time, with twins being extremely rare. Unfortunately, dads don’t have anything to do with raising their babies, and mom is solely responsible.

Female sea otters are one of the best moms in the animal kingdom.

They can be seen giving their infants constant attention. The baby gets licked so much that air bubbles form in the fur, which makes them float.

Sometimes, the mother sea otter has to leave to find food. To make sure their baby is safe, the mom will wrap the young otter in kelp so they don’t float away!

Lastly, I challenge you to find something cuter than a mother sea otter cradling a baby on her chest while floating in the water!

Fact #8: They can gather in LARGE groups.

Sea otters are known to gather together to rest in LARGE groups. Off the coast of Alaska, there have been times when more than 1,000 individuals have been seen together!

And do you want to know what a group of sea otters is called?

So if you ever see dozens of sea otters lounging together, wrapping themselves in seaweed to take a nap, you can casually impress your friends by saying…

“Wow, look at that RAFT of sea otters!”

Fact #9: This fact will leave you “breathless.”

Otters can hold their breath for up to 5 minutes!

The best I’ve ever managed is a tad over 60 seconds while lying calm and relaxed on a bed or couch. And I wasn’t swimming, diving, digging, or carrying my food back to the surface, like a sea otter.

They can clip along at about 11 km/h (7 mph), which is roughly three times faster than a casual walking pace for a person.

Deep diving is a specialty for sea otters too. While most of their swims stay within 60 feet (18m) of the surface, they can dive as far as 300 feet (90 m) looking for food.

To put that in perspective, try to imagine a 27-story building.  If an otter started at the roof, it could swim all the way down to the lobby, dig up a few clams or catch a crab, and then swim 27 stories back up to the surface.

If that building was on land and you dropped something from the top, it would take 4.5 seconds to reach the ground. But even swimming at their top speed, it would take a sea otter nearly two minutes to get down to the bottom. This only gives them about a minute to forage for food, which leaves them not much time to get back to the surface for more air.

It’s DARK way down on the ocean floor.  A sea otter’s eyes are relatively useless that deep.

Instead, sea otters rely on their sense of touch, either with their paws or by using their long whiskers to locate their next meal.

Fact #13: They create their own waterproof jacket!

Otters frequently rub their fur while floating on the surface.  They do this to force air deep into their coat and make an insulating, waterproof layer next to their skin, which is necessary when they dive looking for food.

For example, when an otter deep dives to over 300 feet, the pressure climbs to over 10 atmospheres (160 psi), and the temperature can drop to 4.5º Celsius (40º F).  The incredible pressure and cold shrinks the volume of the air in their fur to just a skin-thin air-layer.

Without the air in its fur, a sea otter would leak all its body heat into the near-freezing water in just seconds.  It would probably succumb to the low temperatures and die.

All that rubbing is like a human putting on a winter jacket before heading outside on a cold winter day!

Otters have been observed engaging in what appears to be a clapping motion while they are floating on the surface. 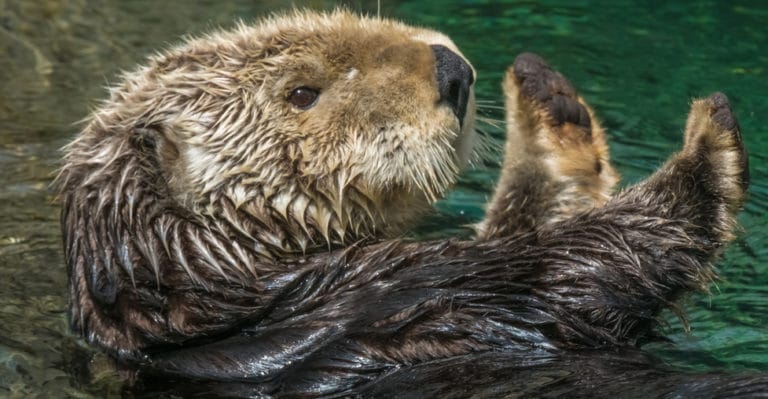 Are they giving applause because some silly human wants to stare at them for no reason again?

Nope!  Sea otters are just practical. Their little tiny fingers can lose heat in the cold water, so they try to keep their hands and feet out of the water until necessary.

Fact #15: Being cute can cause problems.

I think almost everyone would agree that there are not many animals more adorable than a sea otter. Seriously, just watch this video of a mother otter and her pup.

Unfortunately, this can give a false sense of security to many humans.

A common problem for many sea otters is that people try to get too close to them! Whether it’s a sea kayaker paddling near enough to toss them some food or someone on a boat that wants to see a baby up close, sea otters have to deal with many humans invading their space. Having a constant source of stress is not healthy for any animal, including sea otters.

Most of these people have good intentions, but that is the problem.

“Most of the evil in this world is done by people with good intentions.” – T.S. Eliot

What sea otter facts do you know?

Please share any incredible otter facts that I missed in the comments below!

I hope you enjoyed this post. But now, I really “otter” go!