What kinds of shorebirds can you find in Arkansas?

Shorebirds are incredibly lively and exciting! Their showy mating displays and fierce defense of their territory make them fun to watch and observe.

Below, you will find pictures and descriptions of common shorebirds in Arkansas. I’ve also included some fun facts about each species. I think you will be surprised to learn that a few species of shorebirds don’t live by the shore!

Unfortunately, shorebirds can be hard to identify. First, many species look similar to each other. In addition, due to their migratory nature, they can show up in places they typically don’t visit. That said, you may want to consider purchasing the book below if you need additional help with shorebird identification. 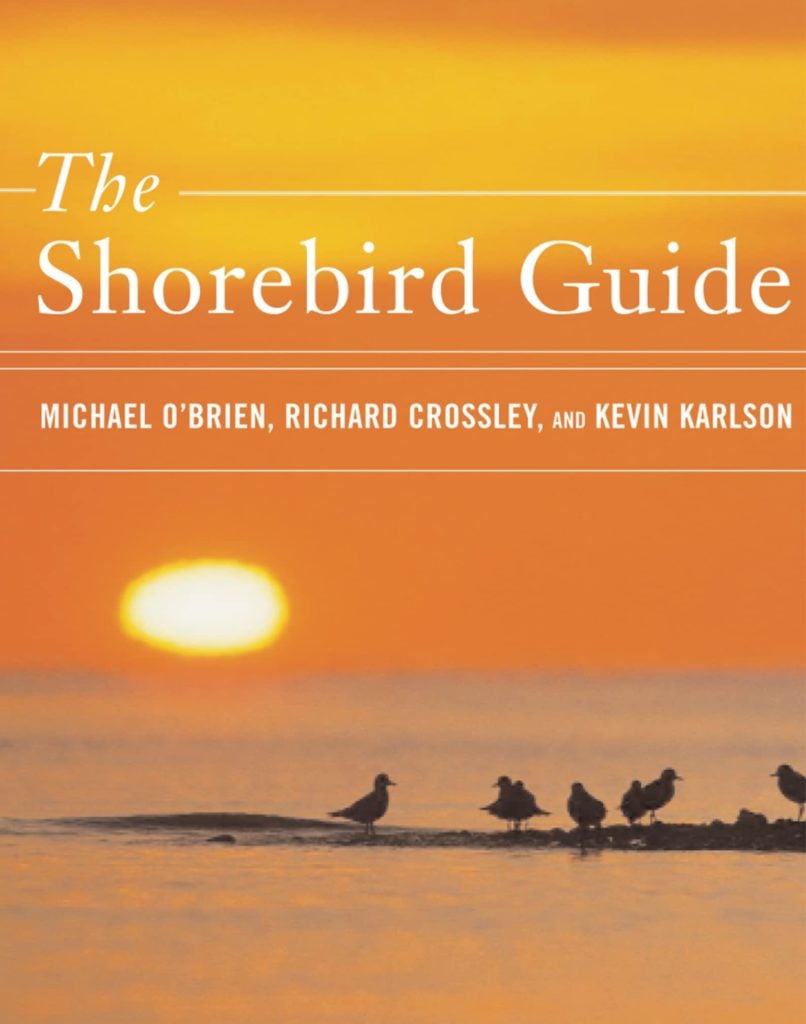 Here are 12 COMMON Shorebirds In Arkansas!

During migration, semipalmated plovers are often seen in various open habitats. They’ll visit sandy beaches, golf courses, and salt marshes. They breed in the north, typically close to bodies of water. Occasionally, they’ll nest in a developed area like a rooftop, gravel runway, or even inside an open building.

In the breeding season, males arrive at the nesting grounds first and begin display flights over territories. When females arrive, they engage in courtship displays. Then the female will select a breeding location. Once bonded, pairs stay together for several years. 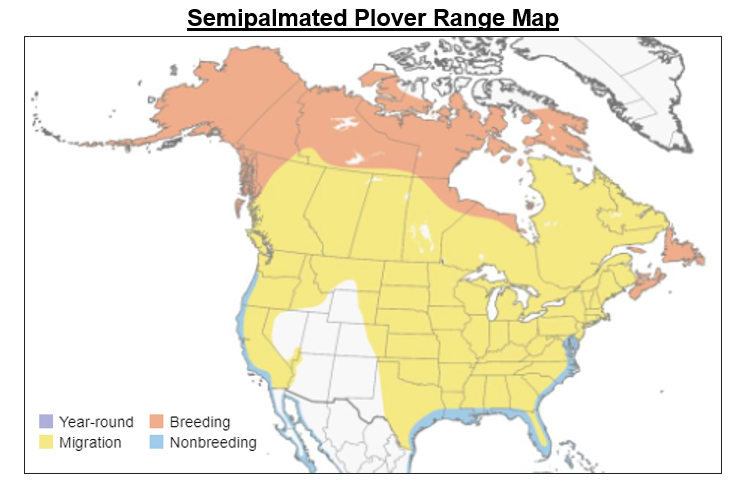 Semipalmated Plovers forage on foot. They pause to listen and look for prey, then run a few steps to peck at the ground. Sometimes you can spot them holding one foot forward and shuffling it over the sand or mud to startle creatures into moving. They will wade into the water but rarely more than an inch deep.

Unlike most shorebirds in Arkansas, Killdeer occupy dry habitats.

These birds feed primarily on small invertebrates, including earthworms, snails, and aquatic insect larvae. They also follow farm equipment, retrieving unearthed worms and insects. Killdeers are adept swimmers, even in swift water, despite spending most time foraging on land. 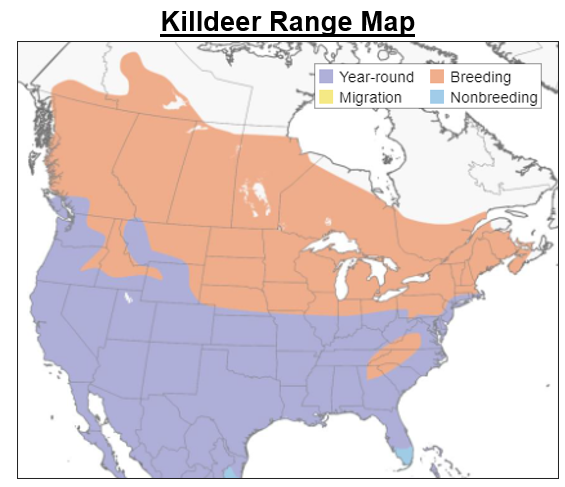 During the nesting season, the Killdeer is one of the best-known practitioners of the “broken-wing” display. They will feign an injury and attempt to lure predators away from their nest. They also puff up and charge at intruders such as cows to prevent them from crushing their eggs.

While rooftops attract nesting Killdeer, they can sometimes be problematic for the young. Chicks are often scared to leave the nest because of the high drop! Parents eventually lure chicks off the roof, but it can be dangerous. However, one set of chicks is known to have survived a leap off a seven-story building. 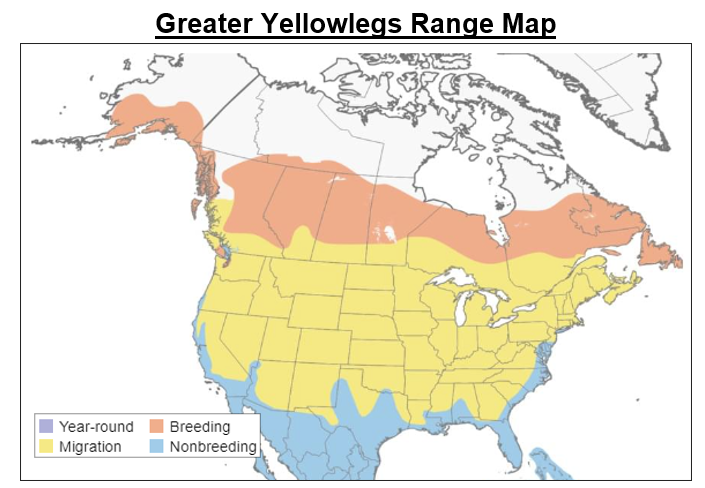 These shorebirds have a boisterous mating display! They land, run around the female, and pose with upraised wings. Once breeding occurs, both parents tend to the young and noisily fend off predators.

Despite the Lesser Yellowlegs’ similar appearance to Greater Yellowlegs, they aren’t close relatives. Instead, lesser Yellowlegs are more closely related to other types of shorebirds in Arkansas. 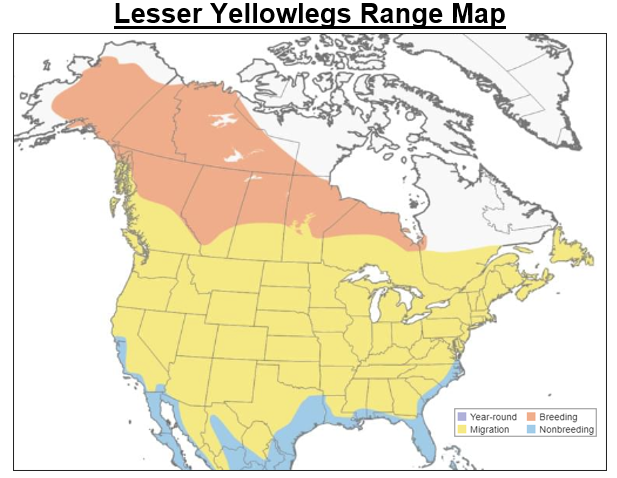 These birds travel in loose flocks and are often seen with other shorebird species during migration and winter. However, they become extremely territorial during the breeding season and will chase intruders away. Lesser Yellowlegs are well known for their noisy defense of nests and chicks.

Lesser Yellowlegs are listed on the Yellow Watch List by Partners in Flight. In the early 20th century, they were heavily hunted in North America. While this practice has ended thanks to the Migratory Bird Treaty Act of 1918, hunting Lesser Yellowlegs is still common in parts of the Caribbean. They’re also heavily impacted by the continued loss of wetland habitat in their wintering range.

Spotted Sandpipers are active foragers and have a distinctive hunting style. They walk in meandering paths, suddenly darting at prey such as insects and small crabs. They bob their tail ends in a smooth motion almost constantly. 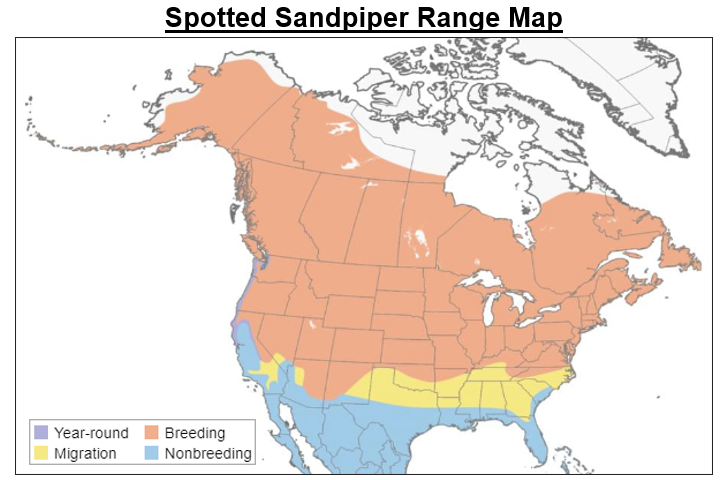 Females are sometimes polyandrous and mate with more than one male. The males will form their own smaller territories within the female’s territory and defend them from one another.

While it is still a common species, Spotted Sandpiper populations have declined in the last several decades. The decline is primarily caused by compromised water quality due to herbicides, pesticides, and other run-off pollution.

Ruddy Turnstones occupy different habitats each season. They nest along rocky coasts in the High Arctic during the breeding season. While migrating, they visit plowed fields and shorelines of lakes. Finally, they congregate on rocky shorelines and beaches in the winter. 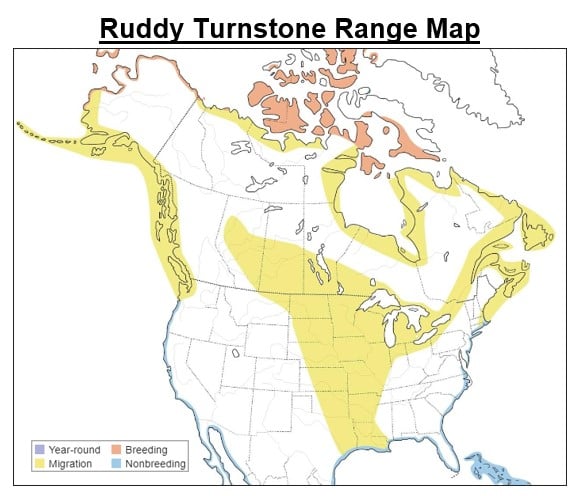 These beautiful shorebirds have a unique feeding style that earned them their name. They insert their bills under stones, shells, and other objects, flipping them over to find food underneath. Several Ruddy Turnstones may work together to flip a large object.

They will also probe under seaweed and other debris. Their low center of gravity and special feet with short, sharply curved toenails allow them to easily walk on wet and slippery rocks. WATCH BELOW!

During winter and migration season, Dunlins roost in coastal habitats. You’re most likely to spot them on mudflats. In addition, they visit inland areas like lakeshores, sewage ponds, and flooded fields to forage. 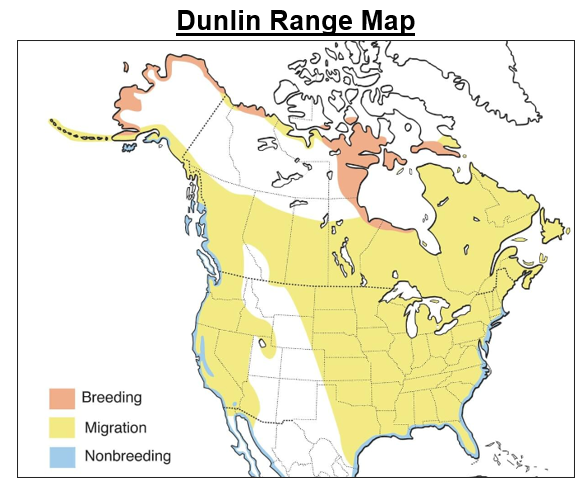 Dunlins forage by picking up items from the surface or probing the mud with their bills. Sometimes, this species makes a “stitching” motion, probing the ground several times per second. Additionally, their ability to forage at night allows them to take advantage of tide cycles, grabbing prey usually covered by the surf.

Some estimates show that Dunlin populations in North America have declined more than 30% since 2006. The Audubon Society also notes that their populations have noticeably declined since the 1970s, though the reason is unknown. Destruction of wintering habitat could play a role.

The Least Sandpiper is the smallest shorebird in Arkansas!

During migration, you can spot them in coastal and inland habitats. Eastern populations of Least Sandpiper are believed to migrate up to 2,500 miles non-stop to their wintering habitats in South America.

During the breeding season, males display for the females with noisy calls and fast circular flights that end in dives. While displaying, males will aggressively defend a display territory but become less aggressive once paired. 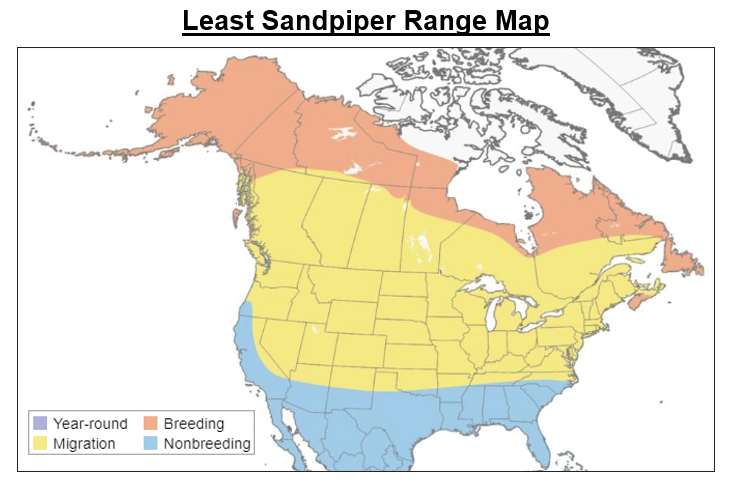 Both parents tend their young for a while, but the females depart earlier, sometimes before the eggs hatch. Males stay at least until the chicks can fly.

The Sanderling is one of the most widespread shorebirds in Arkansas. Predominately a coastal species, you will likely see Sanderlings on wave-washed beaches and rocky shorelines. However, they may occasionally visit inland lakeshores during migration. In addition, non-breeding Sanderlings may remain in their winter habitat year-round. 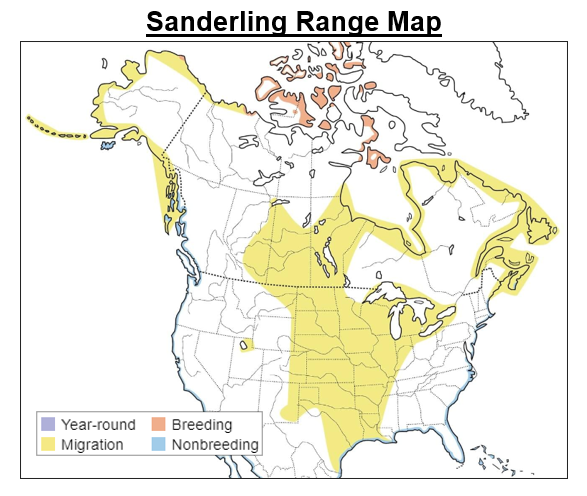 These shorebirds appear to chase the waves when foraging. As a wave recedes, they run down the beach to find sand crabs and other invertebrates stranded by the wave. They may also probe the sand with their bill for hidden prey. After foraging, Sanderlings often regurgitate sand pellets, mollusk fragments, and crustacean shells.

Wilson’s Snipes are stocky thanks to their extra-large pectoral muscles that make up nearly a quarter of their weight, which is the highest percentage of any shorebird in Arkansas. Their extra muscle means they can reach incredible speeds in flight, up to 60 miles per hour. Their fast, erratic flights make them difficult targets for predators.

These birds prefer wet, marshy habitats. You may spot them in bogs and flooded agricultural fields during winter and migration. They tend to avoid areas with high, dense vegetation. 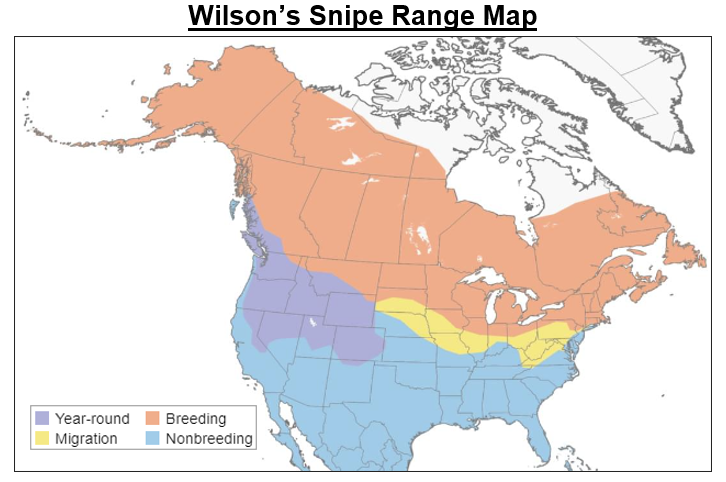 Wilson’s Snipes are well known for their dramatic courtship displays. Typically males but sometimes females circle and dive over their breeding territory, and the air rushing over their outspread tail feathers creates a haunting, whirring “hu-hu-hu” sound. They may complete this display for courtship, advertising and defending territory, or warding off potential predators. WATCH BELOW!

Predators have difficulty sneaking up on Wilson’s Snipes because these birds’ eyes are set so far back on their heads. As a result, they can see almost as well behind them as they can to the front and sides!

American Woodcocks are also known as Timberdoodles, Labrador Twisters, Night Partridges, and Bog Suckers. They occupy habitats with a mix of forests and open fields and spend their days in forests with moist soil. However, they often spend their nights in clearings such as abandoned farm fields, open swamp edges, pastures, and forest openings. 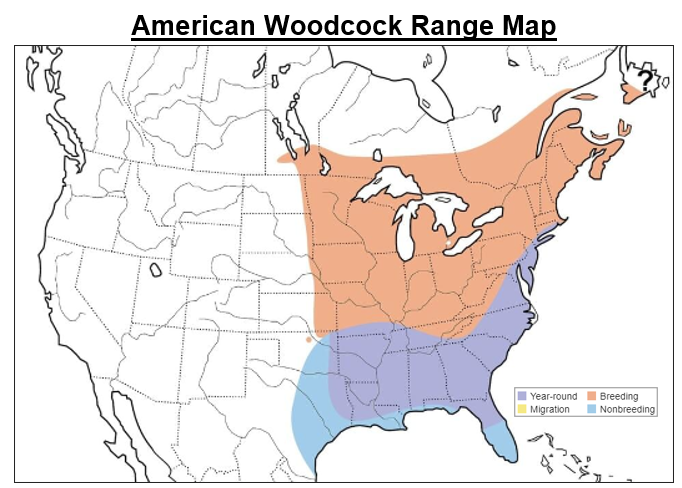 Woodcocks have a sensitive and flexible bill that allows them to find prey by touch. Sometimes they’re observed performing an odd rocking motion while standing. The vibration from this motion disturbs earthworms to make them easier to find. Researchers believe American Woodcocks may be able to hear prey moving underground.

Outside breeding and nesting season, American Woodcocks are usually solitary though they may group into clusters of 2 to 4 individuals. Surprisingly, the oldest American Woodcock recorded was 11 years and 4 months old.

Wilson’s Phalaropes are very social throughout the year, nesting in small colonies and traveling in large flocks. You can spot them at salty lakes during migration, but they may also visit sewage treatment plants, ponds, and coastal marshes. They prefer to breed in areas with shallow freshwater like marshes, wetlands, and roadside ditches. 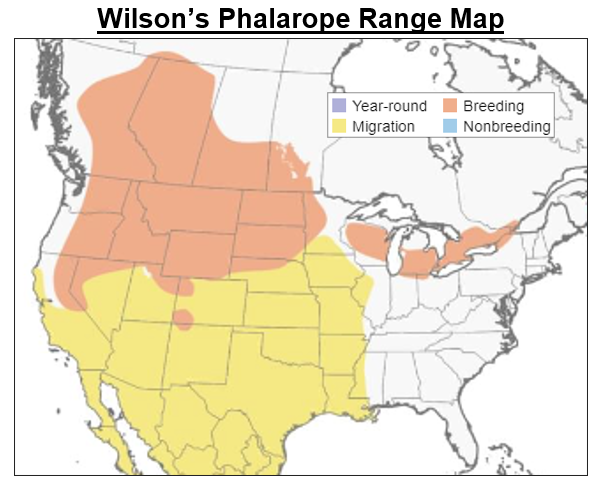 Wilson’s and other phalarope species have a polyandrous mating system where the females typically mate with multiple males. Females may vie for males with aggressive posturing that sometimes leads to fights. Females also perform courtship displays. Once paired, the female lays a clutch of eggs and then abandons the male to seek out another.

These shorebirds have a tremendous appetite and are known to eat so much that they sometimes double their body weight. Occasionally they get so fat they can’t even fly, and researchers can catch them by hand!

Which of these shorebirds in Arkansas have you seen before?