What kinds of spiders can you find in Azerbaijan?

Before we begin, I want you to know that the list below is just a fraction of the spider species in Azerbaijan. Because of the sheer number of these arachnids, it would be impossible to cover them all. For example, some estimates claim there are over 50,000 kinds of spiders on the planet (and the list is still growing)!

Here are the 11 COMMON SPIDERS found in Azerbaijan!

Unusual for spiders in Azerbaijan, males are often bigger than females!

True to its name, this spider closely resembles the infamous Black Widow. But luckily, the venom from a Mediterranean False Black Widow is NOT deadly nor particularly dangerous to humans like the Black Widow.

But that does not mean that you should carelessly handle this spider, as their bite doesn’t come without consequences. Being bitten by a Mediterranean False Black Widow is very similar to getting stung by a bee. Common symptoms include blistering, muscle spasms, pain, fever, sweating, and a general feeling of discomfort lasting for several days.

False Black Widows are considered a cosmopolitan species, which means they are common to find in and around homes. They prefer dark areas, such as under furniture or basement corners. But please don’t live in fear, as these spiders normally don’t bite unless they are accidentally pinched or squeezed.

Camel Spiders, also known as Wind Scorpions, Sun Spiders, or Solifuges, are arachnids, but they are not considered true spiders or scorpions. In fact, the 1,000 or so worldwide species of Camel Spiders are grouped in a separate order – Solifugae. In Azerbaijan, Camel Spiders are found in arid, desert habitats.

The best places to find crab spiders in Azerbaijan are near flowers.

I want you to look closely at the black pattern on the back of the Napoleon Spider. If you use your imagination, can you see the silhouette of Napoleon wearing his iconic hat? Whether you agree or not, this is how the species got its name!

To find these spiders in Azerbaijan, look for them on flowering plants waiting for their prey. Napoleon Spiders don’t make webs but instead use their two pairs of elongated front legs for hunting and immobilizing their victims.

Wolf spiders are found everywhere and in almost any habitat. I know that I see them often when flipping over rocks or logs. There are many individual species of wolf spider found in Azerbaijan, and it would be impossible to list them here, especially since most of them look very similar. 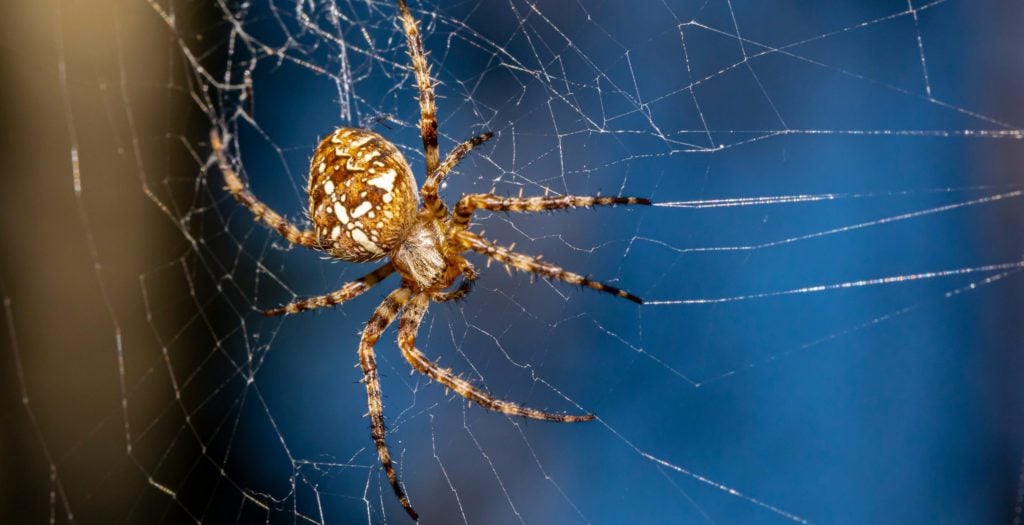 Cross Orbweavers are one of the most well-known spiders in Azerbaijan.

These spiders are commonly found in Azerbaijan in tall grass, shrubs, or along the edges of woodlands.

The best place to find cellar spiders in Azerbaijan is in your house!

The Harvestman might be the most recognizable spider in Azerbaijan!

Learn about other animals found in Azerbaijan:

Which of these spiders have you seen before in Azerbaijan?