What types of vultures can you find in California?

Lucky for you, no matter where you live in California, you should be able to find vultures nearby!

These birds are not considered attractive or “pretty” to most people. Regardless, vultures are incredibly important to the environment because they eat dead animals that most other predators can’t stomach. Eliminating the rotting meat helps stop the spread of tuberculosis, rabies, and more!

Vultures are perfectly adapted to a life of consuming carrion. For example, their featherless heads and necks help keep themselves clean as they insert themselves inside decaying meat. Also, vultures have powerful stomach acid that allows them to be exposed to nasty things without problems, such as rabies, Black Plague, botulism, distemper, and anthrax.

Below is a list of the 3 species of vultures in California!

The Turkey Vulture is common in California. Also called Turkey Buzzards, they are relatively easy to identify, as they are all black, with a bald red head and a pinkish bill. The name derives from their loose resemblance to a Wild Turkey.

Once you know what to look for, it’s easy to spot these vultures while they are flying. Look for a large raptor soaring in the sky making wobbly circles, whose wings are raised high enough to look like the letter “V.” It’s thought that this flying style helps them glide at low altitudes, which keeps them close to the ground to smell for food. 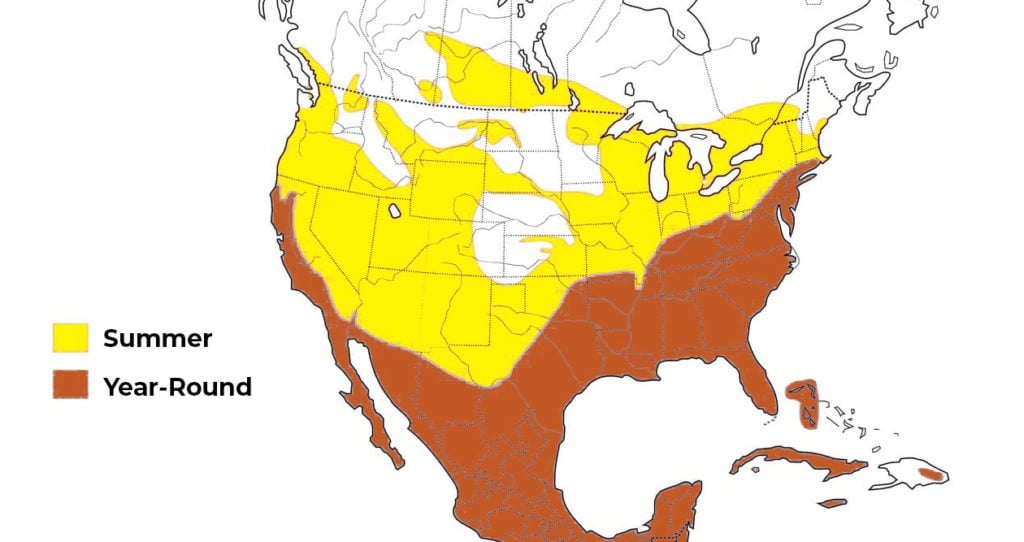 Turkey Vultures use their highly developed sense of smell to locate carrion. Their sense of smell is so sensitive that they can detect dead meat from 8 miles (13 km) away. These birds actually prefer to eat fresh food, and they try to get to animals as quickly as possible after their death.

These birds are dark, and they absorb heat easily. To cool themselves off, they defecate on their legs to cool the blood and help them moderate their body temperature. Let’s just collectively say “Ewww!” and move on!

Look for Turkey Vultures in California wherever you can find dead animals.

As you can imagine, they are often seen along roadsides eating animals that have been hit by cars. They are also frequently observed soaring the skies in the open countryside.

When these raptors are frightened, they can be so full of meat that they cannot rapidly fly away. In this case, you may see them projectile vomit what they’ve eaten to lose weight and escape. If they target the predator’s face, the material can be blinding. Bear in mind that even if they miss, they are vultures that are eating rotting meat, so just try to imagine the odor.

The only sound a Turkey Vulture can manage is hissing. They lack vocal organs. *Press PLAY above to hear the sound they make.*

Lastly, these scavengers are popular and have an entire day dedicated to them! The town of Hinckley (OH) celebrates “Buzzard Day” on March 15th every year. It’s an event that brings the community together as they welcome Turkey Vultures back from migration for the summer.

And here’s a fun fact:

I grew up in Hinckley and used to attend this event yearly, participating in everything from the pancake breakfast to helping count the returning vultures! 🙂 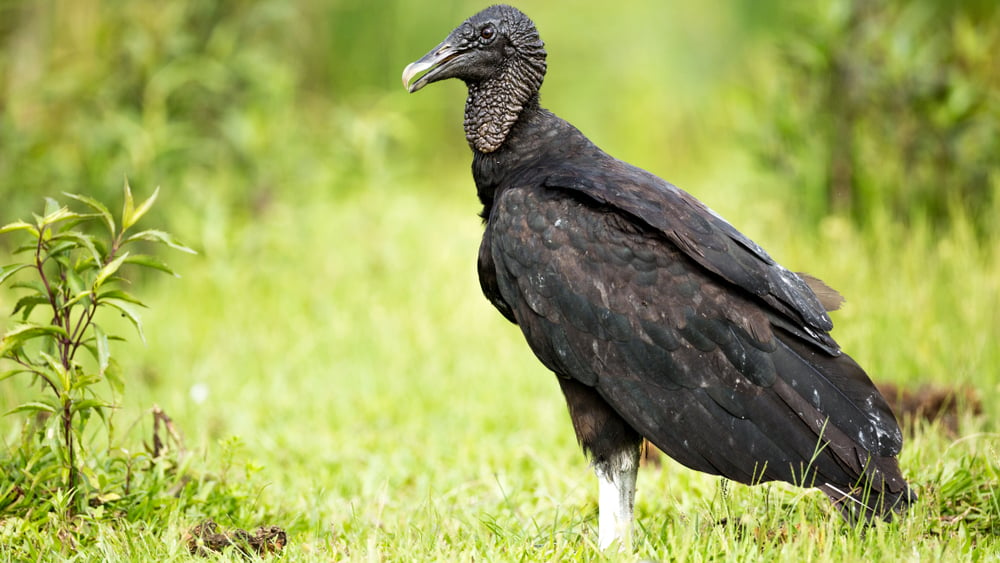 Black Vultures primarily eat carrion, but unlike most other vultures, they are known to kill animals to feed on fresh meat. It’s not uncommon for them to prey on living skunks, opossums, and livestock, such as baby pigs, calves, and lambs.

These birds get their name because their entire body is covered in black feathers and a bald head that features black skin. But as they are soaring, you can see silver feathers on the underside of their wings.

Black Vultures are monogamous and will stay with their mate for many years.

The loyal pair are excellent parents and will defend their nest, eggs, and young vigorously. Interestingly, these vultures build their nests on the ground in stumps, caves, thickets, brush piles, or hollow trees. No nesting material is used either!

Baby vultures are fed by their parents for up to 8 months, and the entire family develops strong bonds. Large communal roosts are common, where relatives can gather to meet up, and unrelated vultures are aggressively chased off.

Look for Black Vultures in both forested and open areas, although these birds are relatively rare to see in California. They prefer to roost and nest in dense forests but forage for food along roads, fields, and other open spaces. 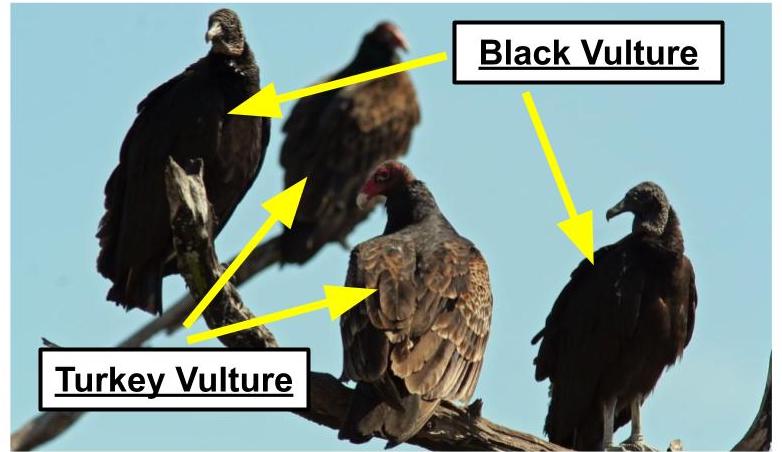 Like most vultures, these birds are mostly silent. The only noises you may hear are grunting and hissing. Trust me; you won’t be hearing any lyrical tunes from these birds!

California Condors are the LARGEST bird in the United States! These vultures are predominantly black, except the underwing, which is white. Make sure to check out their heads, which range in color from yellow to orange to pink to purple to blue and to red. Their eyes are a startlingly deep red.

One of the rarest species of birds on the planet, the California Condor went extinct in the wild in 1987 when all of the remaining birds were captured. These birds were then raised and bred in safe environments with the hope of releasing the offspring back into the wild.

To increase numbers, biologists needed to encourage females to lay a second egg, since condors only produce ONE egg naturally. To accomplish this feat, the first egg laid was removed and raised by humans who used puppets to mimic the parents! 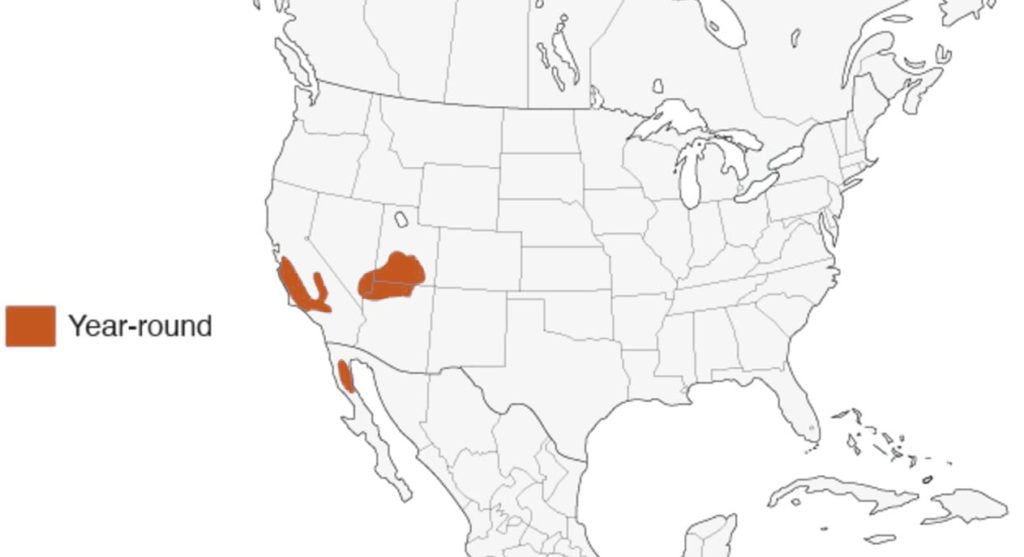 Luckily, the program worked, and condors were released back into the wild in California in 1991 and Arizona in 1996. Since then, they have slowly been increasing their numbers. In March 2020, there were 337 birds in the wild and 181 in captive breeding programs. California has 200, Arizona & Utah combine for 90, and Baja California & Mexico have another 39.

So why has the California Condor population declined so drastically?

Condors used to be found in large numbers throughout the entire southwest and west coast, but these birds have had to deal with many obstacles. In the past, they have been poisoned and poached by people who feared these completely harmless birds. One of the primary types of poisoning is lead, which happens when people shoot other animals for sport and don’t collect the bodies, which then the condors eat.

As the human population grew out west, habitat loss also contributed heavily to the loss of condors. Combine these issues with the fact that these vultures only have one young per nest and a late age for sexual maturity, and you have the perfect recipe for a species in trouble.

California Condors have exceptional gliding abilities, riding thermals at almost no energy expenditure, they can soar up to nearly 15,000 feet (4,600 meters) high. The frontline of their wings are almost entirely straight, and the “finger-feathers” on the wingtips allow them to be extremely sensitive to thermals. They can spot a meal at great distances and have been known to fly 150 miles (240 km) in a single search for food.

These vultures can gulp down up to 4 lbs (1.81 kg) of food in a single sitting! After a meal this big, they may not need to eat for a week.

They produce no sounds other than an obnoxious hissing and a throat-clearing sound.

Do you need help identifying vultures?

Which vulture species have you seen before in California?