What kinds of warblers can you find in Washington?

I’m always amazed at the variety of colors, sizes, and songs of warblers in Washington. It seems impossible that all these little vocalists are related!

Whether you’re a casual observer in your local woods or an avid birder expanding your life list, warblers are a welcome sight (and sound!) on a hike.

There are two subspecies of this warbler in Washington. They are closely related but can be distinguished by their throat patch, which is yellow in Audubon’s Warblers and white in Myrtle Warblers.

Yellow-Rumped Warblers are the most versatile foragers of all warblers in Washington.

Listen for the Yellow-Rumped Warbler’s loud, clear song, which sounds like “tsee-tsee-TSEE-TSEE-tsee.” It starts soft at the beginning, gets louder in the middle, and then ends quietly.

The males of this species also have a unique feature that makes them easy to spot. Their black cap is small and round, resembling a toupee! Females may have dark spots or a greenish wash on their heads, but only the males have the black cap.

Unlike other warblers in Washington, Wilson’s Warblers are more comfortable on the ground or in the forest understory. This makes them easier to spot without craning your neck! They often nest on the ground, concealed in shrubs at forest edges.

There are 35 subspecies of yellow warblers across North and South America! The American Yellow Warbler, our most prevalent species, is found all over Washington.

Listen for this species in moist forests of small trees. Its particular favorite nesting habitat is willow groves.

American Yellow Warblers are frequent victims of brood parasitic Brown-headed Cowbirds, who lay their eggs inside the nest of these warblers! But they have a unique way of combating this. They’re known to build a new nest directly on top of their old one, smothering their eggs in addition to the cowbirds’ eggs. As a result, researchers have found nests up to six layers deep!

With its bright yellow coloring and relatively large population, this is one warbler you shouldn’t have trouble finding. The song of the American Yellow Warbler is said to sound like “sweet, sweet, sweet; I’m so sweet!”

American Redstarts prefer breeding habitats with open woods of mostly deciduous trees. However, they’re much less picky when they’re migrating, and they will roost in nearly any area with trees. 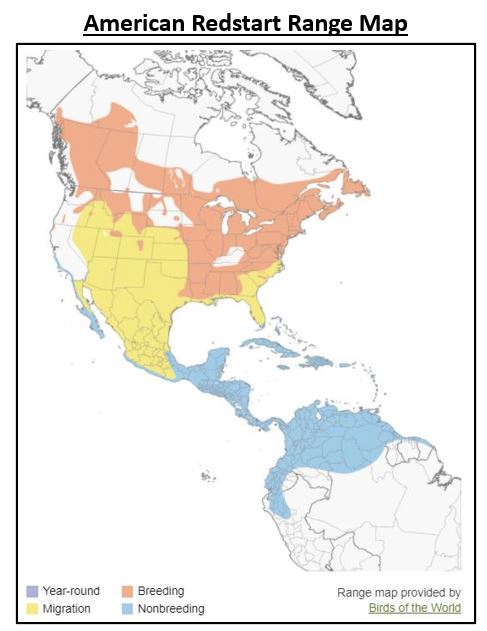 The American Redstarts’ abundance and bright coloring make them one of the more easily spotted warblers in Washington!

This beautiful species is high-energy and constantly moving. American Redstarts use their bright coloring to hunt insects, flashing their tail feathers to startle them into flight. Once the insect takes off, the bird snatches it right out of the air! That’s one stylish way to “catch” a meal! 🙂

Unless you’re fortunate and highly observant, you may never see the orange patch that gives the Orange-Crowned Warbler its name! It’s only visible when the “crest” feathers are raised, so catching a glimpse of this tiny bit of color is nearly impossible.

Look for Orange-Crowned Warblers in Washington in open, shrubby habitats. They prefer areas with plenty of insects and berries, which are this species’ favorite foods. 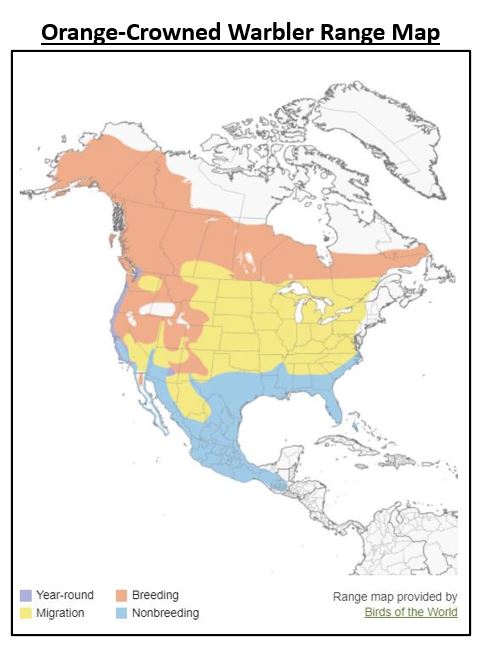 Its high, trilling song lasts about one second and is repeated often. It dips in pitch slightly at the end.

Nashville Warblers have two completely separate breeding areas that don’t overlap! The western population was once considered a distinct species, called the Calaveras Warbler, and generally has a brighter yellow color with a larger white patch.

Nashville Warblers are one of the longest-lived warblers in Washington. The oldest known individual was aged ten years and two months!

One look at a male Common Yellowthroat will tell you why this species is also called the Yellow Bandit! The males’ distinctive black eye markings set it apart from other warblers in Washington.

Like most warblers, Common Yellowthroats migrate at night during the fall. Nighttime migration helps warblers avoid predators and poor weather conditions like excessive heat and wind.

An advantage for bird enthusiasts is that these species are much easier to spot during migration while resting during the day! With a bit of patience, you might also catch a flock in migration at night, visible against a full moon.

Look for MacGillivray’s Warblers in dense vegetation near streambeds and second-growth forests. They prefer to stay close to the ground where they forage for insects.

They move in sudden, bursting hops along the forest floor. MacGillivray’s Warblers definitely aren’t the most agile birds you’ll see!

They’re quite easy to spot during migration, resting in dense thickets during the day. Their cheerful call and bright patterned coloring make them a welcome sight on a hike.

The MacGillivray’s Warbler song is trilling and high, with an inflection near the middle: “jeet jeet JEET jeet jeet.”

The Townsend’s Warbler, with its distinctive black face mask, bright yellow face and throat, and mottled back, is one of the most striking warblers in Washington!

Look for this species in mature conifer woods with brushy undergrowth. During the fall migration and over winter, you may attract Townsend’s Warblers to your feeders when the temperature is below freezing. Offer high-energy foods like suet, peanut butter, and mealworms.

Listen for their buzzy, trilling song, which has been said to have a dreamy, sweet quality.

Though they aren’t as well-studied as other warblers in Washington, they can be recognized by their yellow eye dot and black and white streaky coloring. Females are smaller, plumper, and have larger heads than males. 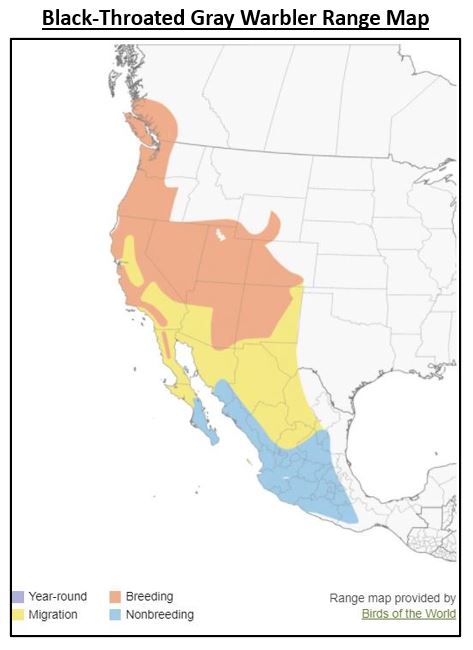 Even though Black-throated Gray Warblers are approachable and easy to observe, almost nothing aside from their appearance is known about them.

If you don’t live in its range but think you’ve spotted one of these distinctive birds, you’re probably right! Black-Throated Gray Warblers live west of the Rocky Mountains, but a few get blown off course every year and end up in the eastern US!

You’re most likely to see Hermit Warblers in pine, spruce, or fir trees in mature conifer forests. Although their name implies they might be hard to spot, it’s more a matter of looking in the right place! 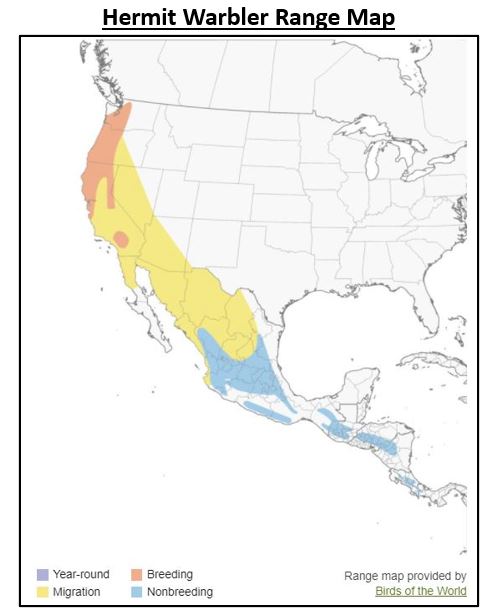 This species prefers the very tops of tall conifer trees, so be prepared to look up a lot if you want to find this little bird. You may also have luck on mountain trails that sit eye-level with trees.

Do you need help identifying or attracting warblers in Washington?

Here are a few resources that can help!

How many of these warblers have you seen before in Washington?

To learn more about birds in Washington, check out my other guides!