What types of whales can you see in Massachusetts?

Whale-watching is one of the most exciting adventures I can think of! These enormous, fascinating creatures have captured the imagination of many nature lovers.

Below, you will find pictures and descriptions of the whales found in Massachusetts. I’ve also included RANGE MAPS and fun facts about each species.

Although there are many interesting facts about whales, I kept each description brief to cover all the species. So, you may want to consider purchasing the book below if you want more information.

Here are the 8 WHALES in Massachusetts!

Pygmy Sperm Whales are a widespread species throughout the world’s oceans, inhabiting temperate and tropical waters. 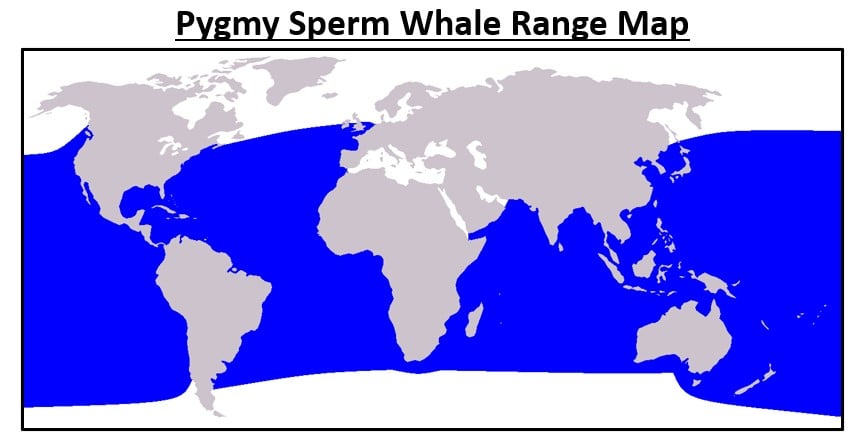 Interestingly, Pygmy Sperm Whales also squirt ink at predators. This unique adaptation to evade danger suggests that they were historically preyed upon by larger species. Although it might be hard for us to imagine now, at one time, these large creatures were the “small fish!”

Long-finned Pilot Whales in Massachusetts prefer cooler temperatures than their short-finned cousins, so they have a different global distribution. They can be found in temperate and subpolar waters. Though they favor water around the continental shelf, they are also commonly spotted farther offshore in very deep areas. 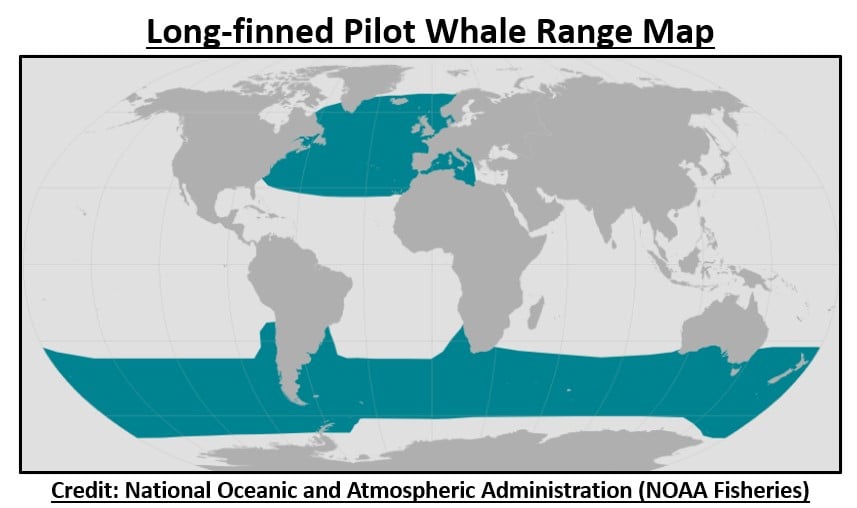 Members of this species live in tight-knit family groups that follow the maternal line. These pods, usually with 10 to 20 individuals, also associate loosely with other pods in their general area. As a result, Long-finned Pilot Whales can be observed in huge gatherings that can exceed thousands of individuals.

One of the most interesting features of Long-finned Pilot Whales is their eating. Instead of snapping their teeth closed around their prey like most other dolphins, they retract their large tongue, causing negative pressure inside their mouths, which draws in water along with their meal. So, in essence, they suck their prey up like a giant vacuum cleaner!

Risso’s Dolphins live in a wide range of habitats, including tropical, sub-tropical, and temperate waters. They tend to be found just beyond the continental shelf, in water between 400 and 1,000 meters (0.24 to 0.6 miles) deep. However, they can be spotted occasionally in shallow coastal waters and deep offshore waters too. 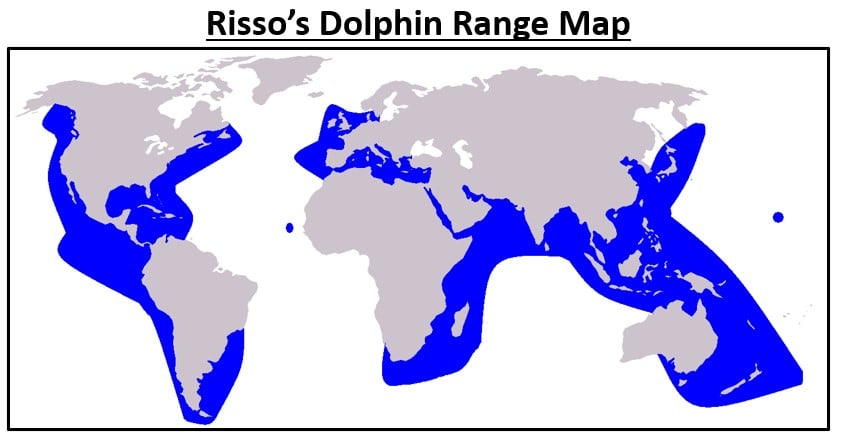 This species primarily eats squid. They tend to hunt at night when squid rise to the surface and become far easier to hunt. The white markings on the bodies of Risso’s dolphins are scars made by squid and other animals such as cookie-cutter sharks.

In addition to scars from their prey, Risso’s Dolphins also get scars due to raking, a common method of communication between individuals. They use their teeth to scrape one another, leaving long parallel cuts on their skin. Rake marks can be severe, but most of the time are very superficial and do not fully pierce the skin. Raking is used to assert dominance and fight over breeding partners.

Interestingly, the rake marks and other injuries heal white. The marks are very obvious against their dark gray skin. The scars accumulate and merge, and even shallow injuries remain visible forever, creating an intricate pattern of scrapes and lines. This is thought to help the dolphins avoid aggressive interactions as they age. Risso’s dolphins live for around 35 years, and scientists often use their marks to estimate their age.

This species is one of the most wide-ranging whales in Massachusetts.

The same whales that can be observed feeding in the waters around Alaska in summer travel to Hawaii during the winter months! Humpback Whales follow the same migration patterns year after year, making them easy to spot on whale-watching expeditions. 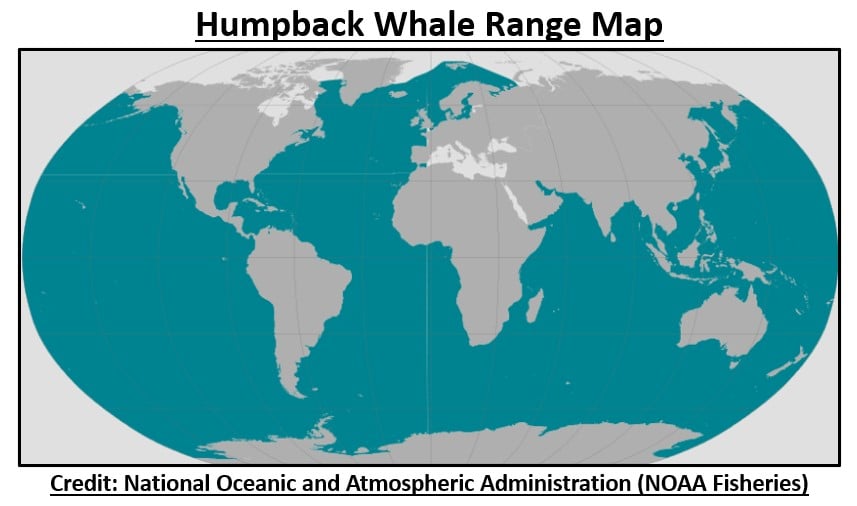 Whale watchers love to see Humpback Whales exhibit their showy behavior. They often breach high out of the water, slapping their bodies and fins against the surface. Scientists believe that the loud sounds produced by their breaching are a form of communication with other whales.

Krill, a type of tiny crustacean very similar to shrimp, is the primary food source of these gigantic whales. Humpback Whales, like the other great whales, lack teeth. Instead, they have hair-like plates called baleen that hang down from their upper jaws. Whales take huge gulps of water into their mouths and capture thousands of krill. Then they filter the water back out through the baleen plates, trapping the krill inside.

Fin Whales are the fastest swimmers of the great whales. This ability likely evolved to help them evade predation, especially by orcas that work together to hunt and kill young or vulnerable individuals.

Their speed is unnecessary for their hunting needs, though, because Fin Whales feed on krill, schools of tiny fish, and squid. Instead, they use a technique known as lunge feeding to speed through a tightly-grouped ball of prey, swallowing as many as possible 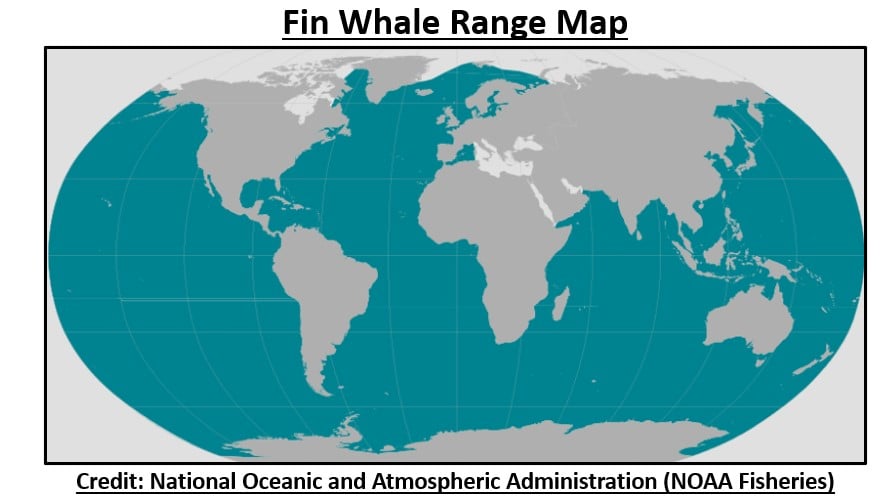 Fin Whales were hunted to near extinction during the 19th and 20th centuries. Thanks to their fast swimming pace and preference for offshore waters, they avoided predation during the primitive years of whaling. Unfortunately, as whaling techniques modernized and mechanized, they became victims of the industry.

But as conservation of whale species became a priority, the population of Fin Whales rebounded somewhat. Nevertheless, they are still in danger of extinction throughout their range. 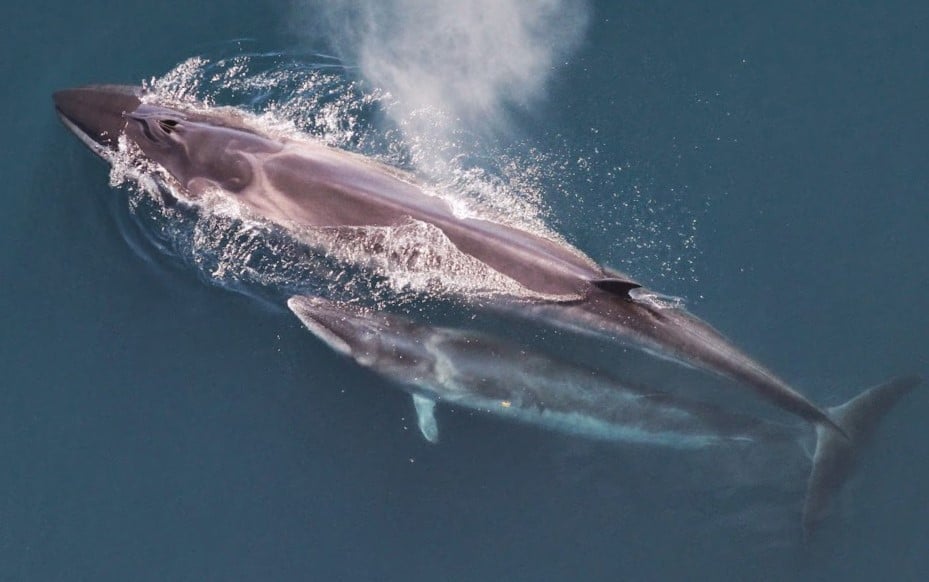 Sei Whales are very widespread around the world and can be found in a range of habitats, but this doesn’t mean they’re easy to observe. These whales prefer deep waters far offshore and are difficult to spot, particularly because they aren’t showy when they breach the surface for air. 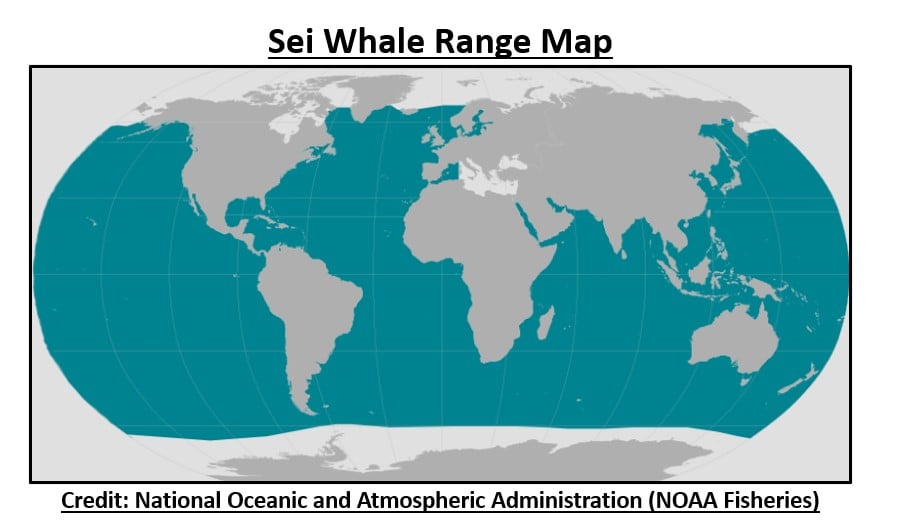 They keep their bodies fairly straight when they surface and don’t bend much to dive. Also, they don’t raise their flukes high from the water to dive like other whales. Instead, they produce only a little movement on the surface, from where their tails propel them downward.

They prefer temperate water and avoid the tropical band around the equator. However, it is not unheard of to see them in tropical areas. These whales don’t venture into polar waters, so the best area for observation is halfway between the equator and a pole.

Sei Whales eat krill, as the other great whales do, but are a bit more generalist in their diet preferences. This species also eats plankton, small schooling fish like anchovies, and some squid. 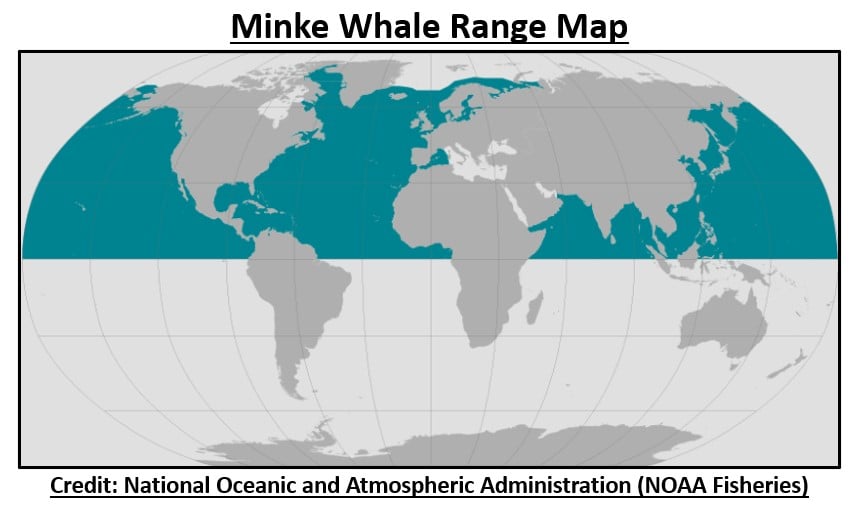 In winter, Minke Whales head to warmer waters and disperse widely in pairs or alone. This is likely a strategy to avoid orcas that hunt Minke Whales due to their relatively small size. In addition, they will swim much faster than normal to try to outrun orcas.

If you spot one, you may recognize a Minke Whale by its unique surfacing style when they come up for air. The tip of their snout appears from the water first, then they roll the length of their bodies along the surface and dive down using their entire tail.

Whale watchers lucky enough to observe these rare animals will enjoy their endearing behavior. North Atlantic Right Whales breach from the water in impressive displays, often coming nearly all the way out of the water before twisting back down. In addition, they are very social and gather together in groups at the surface throughout the year.

Unfortunately, these incredible creatures are critically endangered. They get their name literally from being called the “right” whale to hunt by fishermen during the whaling era. They were ideal targets because they are slow, swim close to the shore, and float after they die. 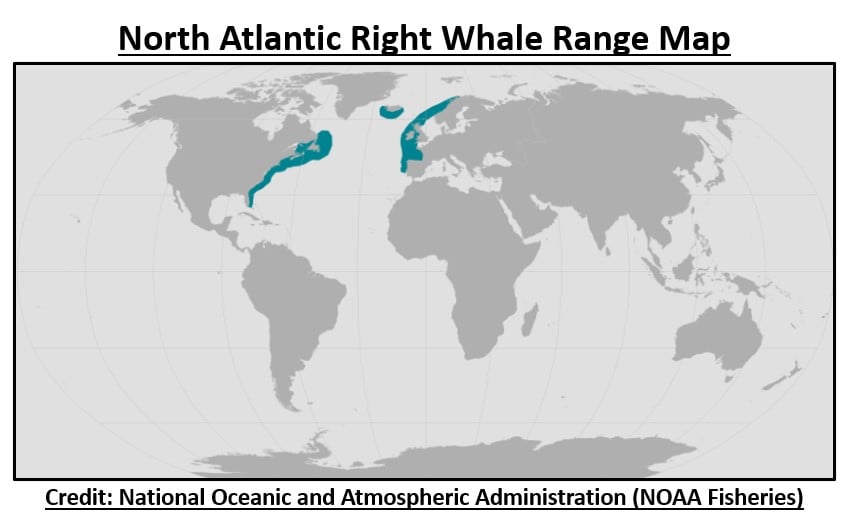 After being heavily hunted during the 1800s and 1900s, North Atlantic Right Whale populations slowly increased until around 2010. Sadly, since then, the population has declined.

Today, these rare whales are killed by entanglement in fishing gear and boat strikes. Healthy calves are few and far between, which further reduces their population. Breeding problems could be related to contaminants, food shortages, or the stress of non-lethal entanglements in fishing gear.

North Atlantic Right Whales in Massachusetts are likely to be capable of living far longer than we currently observe. They may be able to live until around 70 or even 100 years old, but the average life expectancy is between 45 and 65 years. The cause of death is usually related to human activity.

Do you want to learn about LAND MAMMALS found in Massachusetts?

Check out this field guide!

Which of these whales have you seen in Massachusetts?