“How many WHIPTAIL lizards are there in the United States?”

Today, you’ll learn the 17 kinds of whiptail lizards in the United States.

This species has the widest range of all the whiptail lizards in the United States.

You can find Western Whiptail Lizards in the United States in sandy, rocky, or firmly packed soil.

In the United States, you can typically spot Plateau Striped Whiptails in mountain forests of pine, juniper, oak, and fir trees. 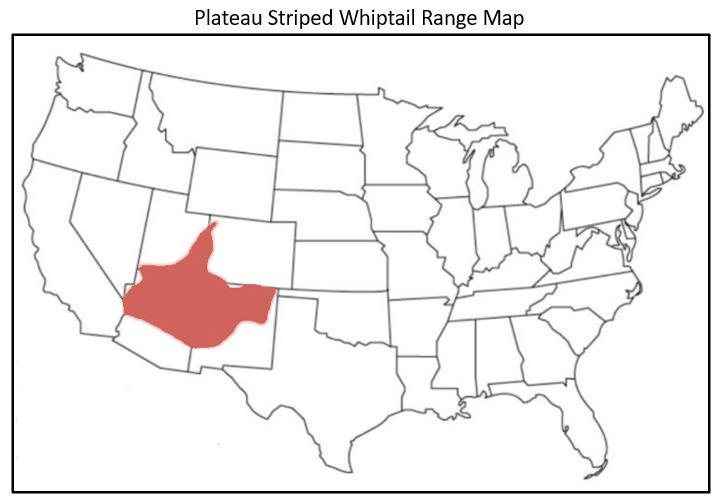 The Little Striped Whiptail Lizard prefers prairie grassland but is also found in shrubby desert areas in the United States. 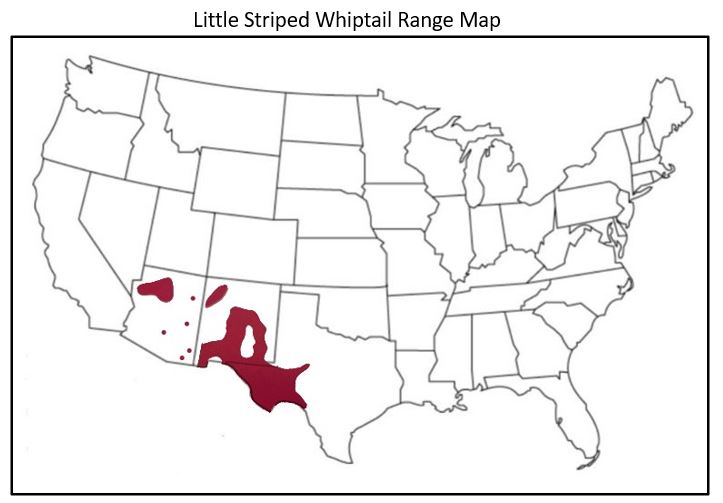 It eats insects and their larvae, and also spiders – including tarantulas! This species may be one of the smallest whiptail lizards in the United States, but it’s brave when it comes to dinnertime!

Common Spotted Whiptails in the United States are prevalent in prairie grassland and riverbank habitats. 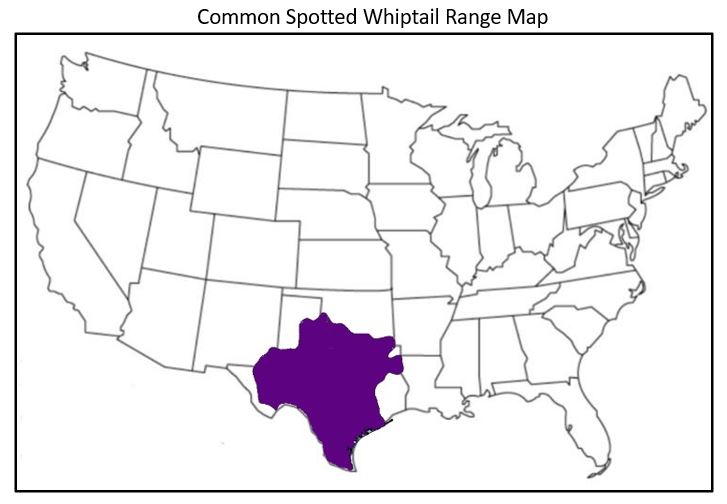 Occasionally they travel into mountain areas and can be found in evergreen forests. 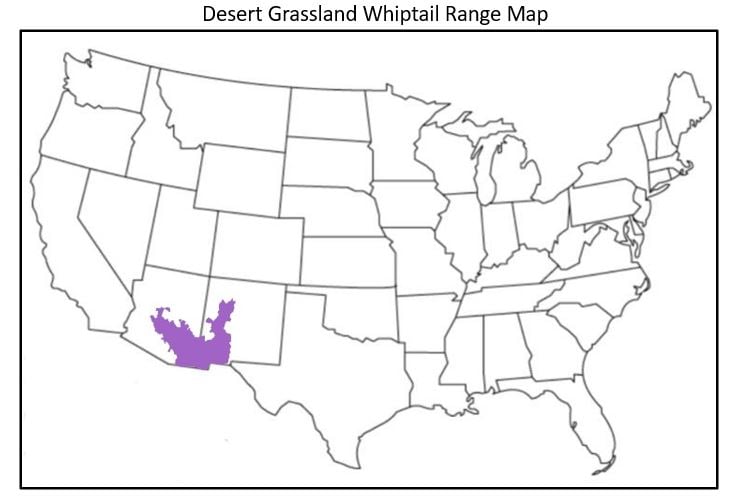 Interestingly, overgrazing is causing the Desert Grassland Whiptail Lizard’s range to expand, rather than threatening its habitat. You might think the opposite, but the loss of plant life creates more desert, where this lizard is right at home!

Look for Sonoran Spotted Whiptails in the United States in desert scrubland and oak woodland habitats. They eat termites, beetles, grasshoppers, and spiders. 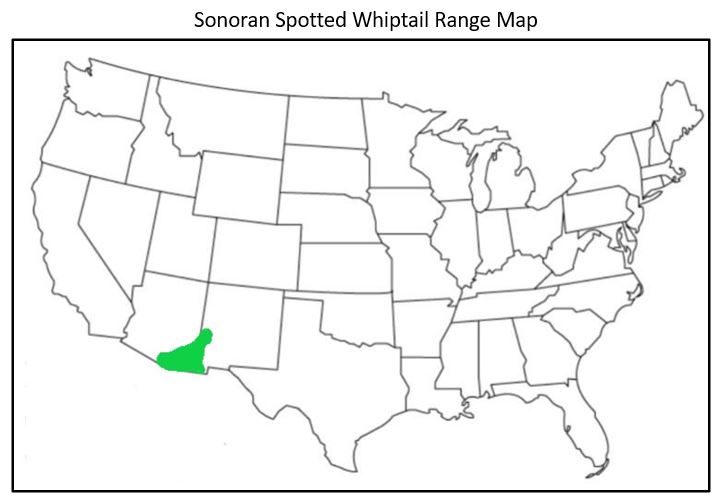 Natural predators of this whiptail lizard are in for a surprise when they try to catch one.

This lizard can “drop” its tail if caught, leaving the predator holding a much smaller meal than it planned! The lizard’s tail then regenerates, but this takes so much energy that this defense is often a last resort.

You can find the Gila Spotted Whiptail in the southwest United States in juniper and oak woodlands, along the sides of streams, and in desert grasslands. Their diet is primarily termites and ants. 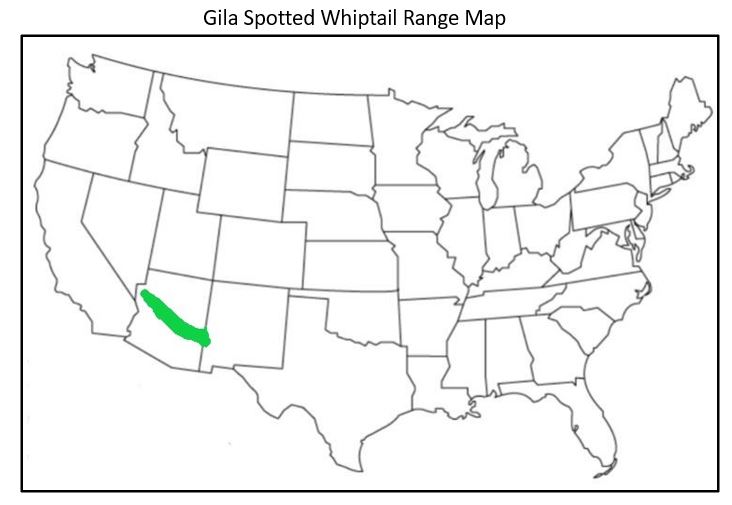 Gila Spotted Whiptail Lizards have a fascinating talent – they can clone themselves!

In a process called parthenogenesis, members of this all-female species lay unfertilized eggs. When the eggs hatch, the young lizards are genetically identical to their mother! 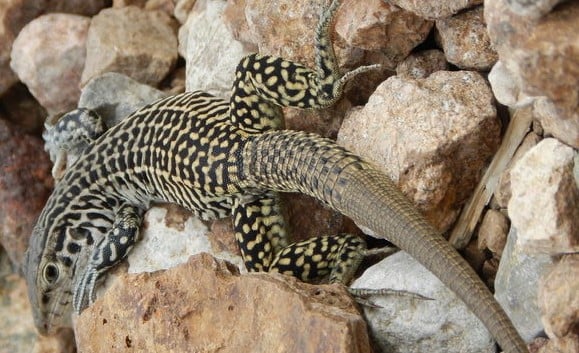 Common Checkered Whiptails live in the southwest United States in flatlands, canyon slopes, and bluffs. Typically, they can be found around creosote brush or trees like willows, pinion, juniper, and cottonwoods. 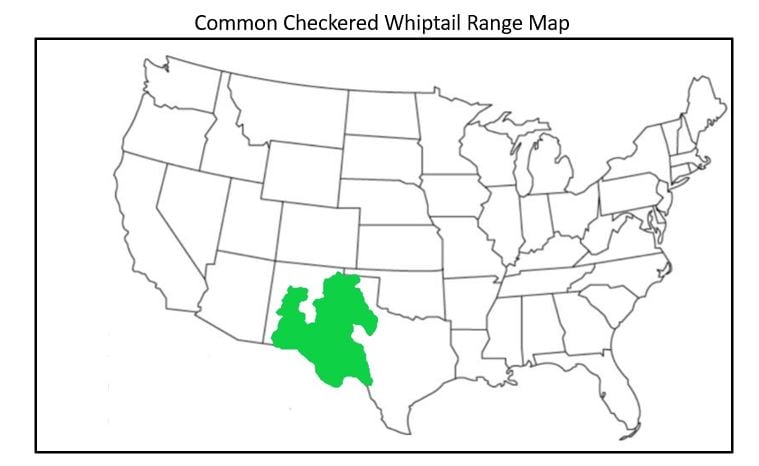 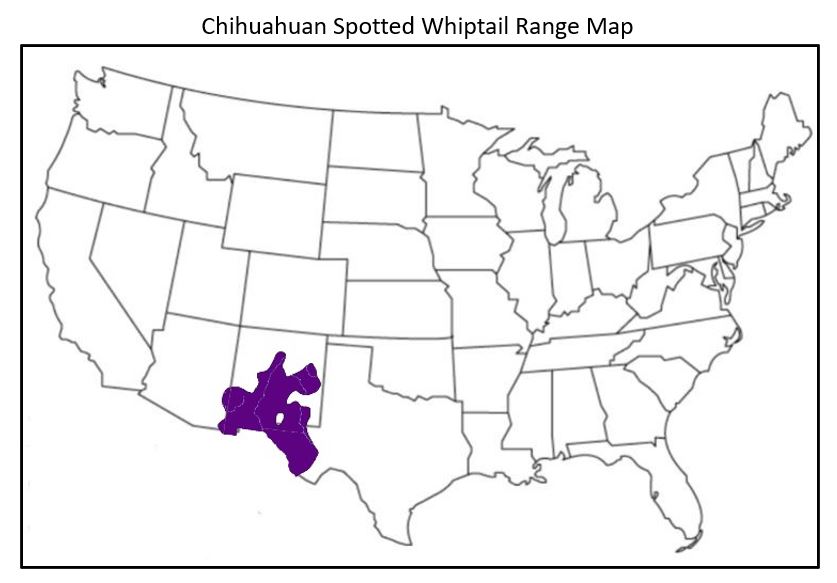 You are likely to find Marbled Whiptail Lizards in the United States in desert flats or other sandy, open areas. 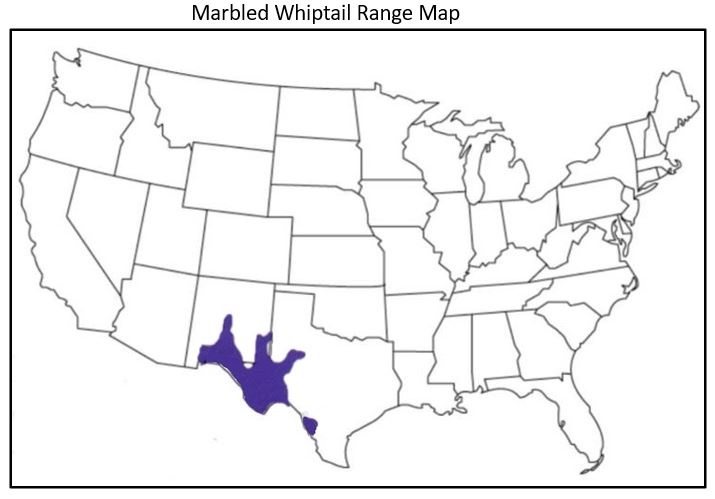 This species is one of the most challenging species of whiptails to find in the United States. 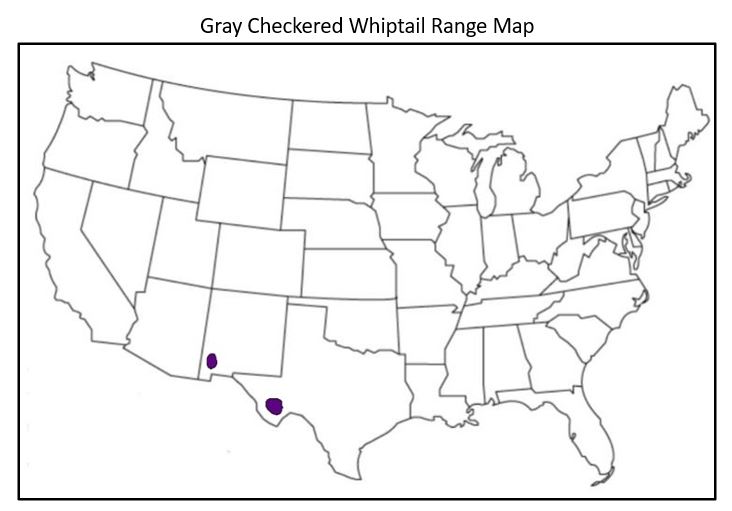 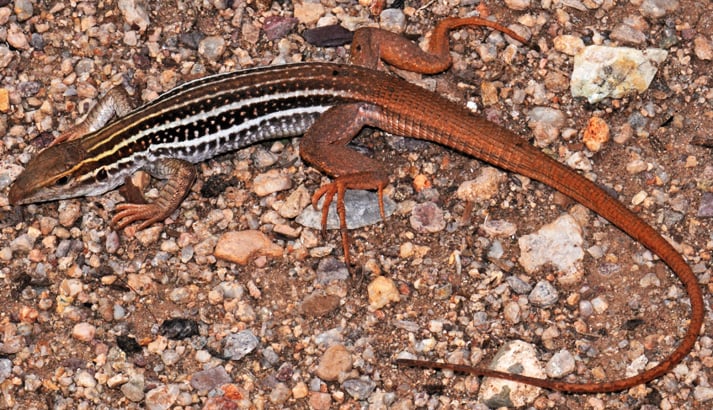 The Canyon Spotted Whiptail is the LARGEST whiptail lizard in the United States!

It lives in mountain canyons and mesas with a semi-arid climate. Canyon Spotted Whiptail Lizards use dense, shrubby vegetation to hide since they are often too large to use animal burrows. 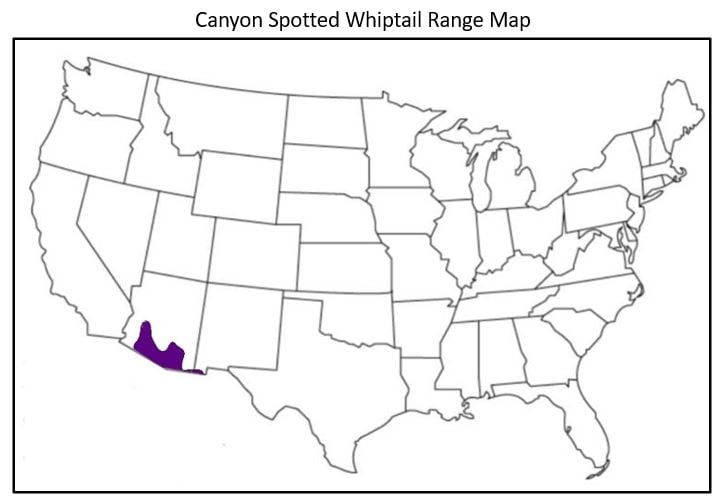 You’re likely to spot one of the two U.S. subspecies in the early morning or late afternoon when they are most active.

Besides being the largest whiptail lizard, the Giant Spotted Whiptail is also the most aggressive. Males will fight one another for a female, over territory, and for food! 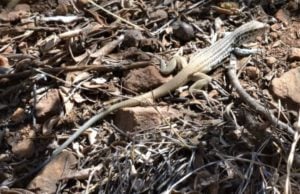 Plateau Spotted Whiptail Lizards have a small range in the United States.

If you find yourself in southwest Texas, look for them in mountains, desert foothills, and canyons with sparse plant life. 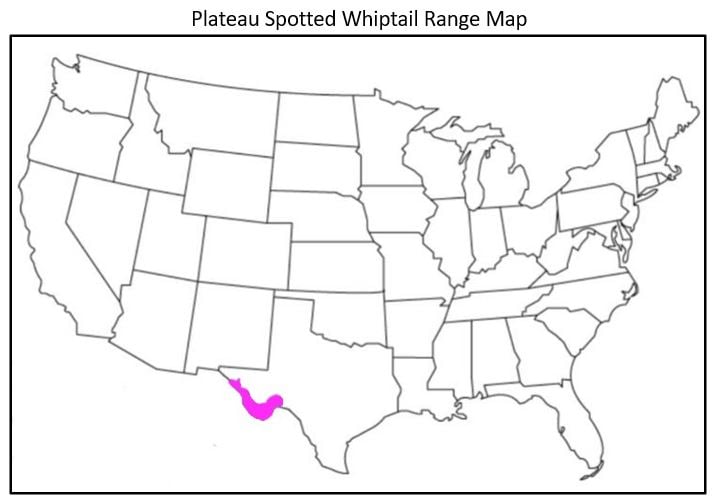 Unlike other whiptail species, they are dietary generalists and will eat insects as well as flowers and leaves. They are even known to eat dandelions!

The Plateau Spotted Whiptail Lizard is ONLY found in the Big Bend region of Texas in the US. Despite its small range, its population is abundant. You may even see one on a suburban sidewalk during daylight hours! 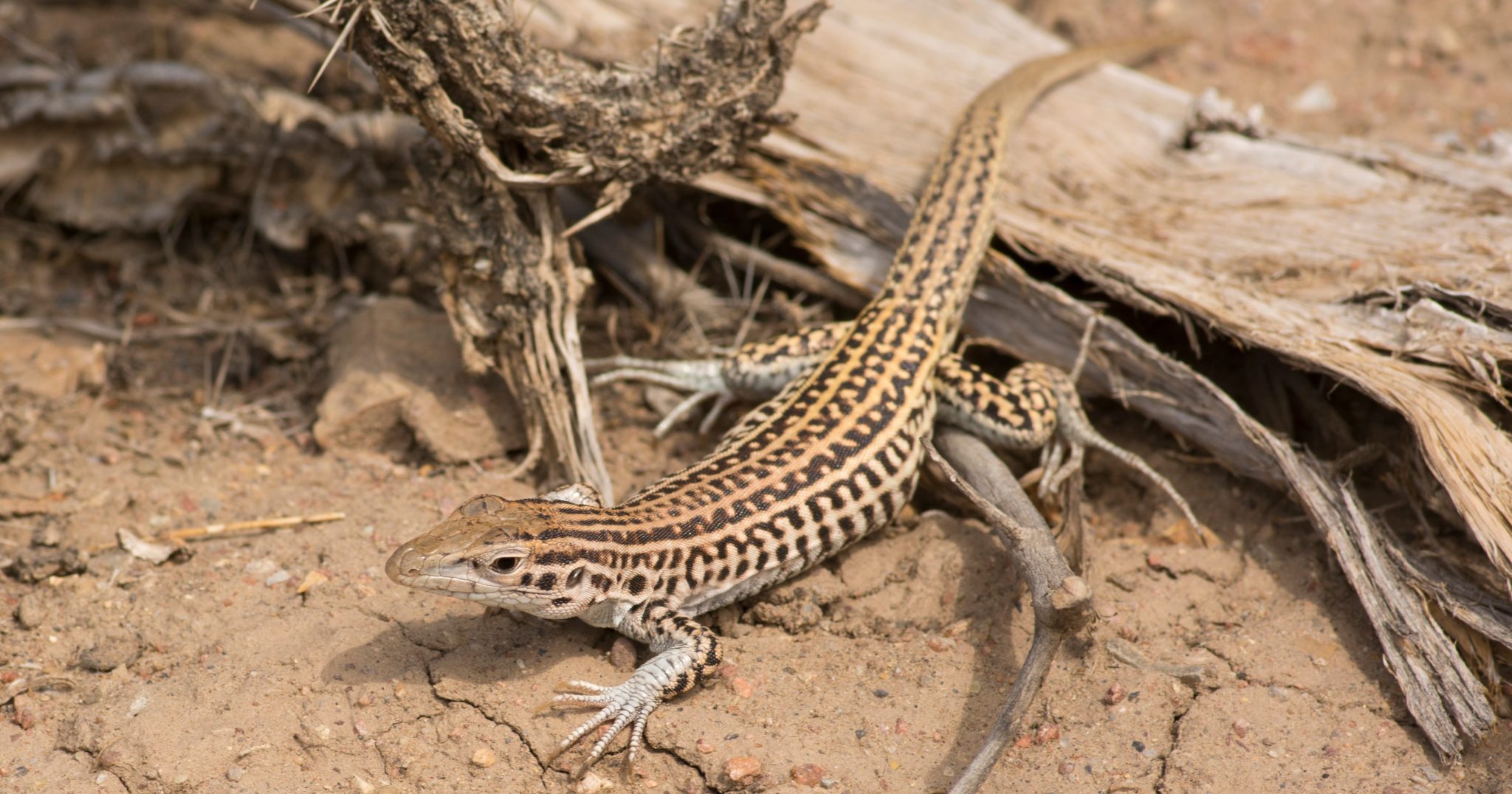 The Colorado Checkered Whiptail is ONLY found in mid to southeastern Colorado. Its range and population are so small that you’d be lucky to ever spot one in the wild!

These whiptail lizards prefer to live on hillsides and canyons with yucca trees and prickly pear cactus. They eat insects, including caterpillars, moths, and termites, and also spiders. 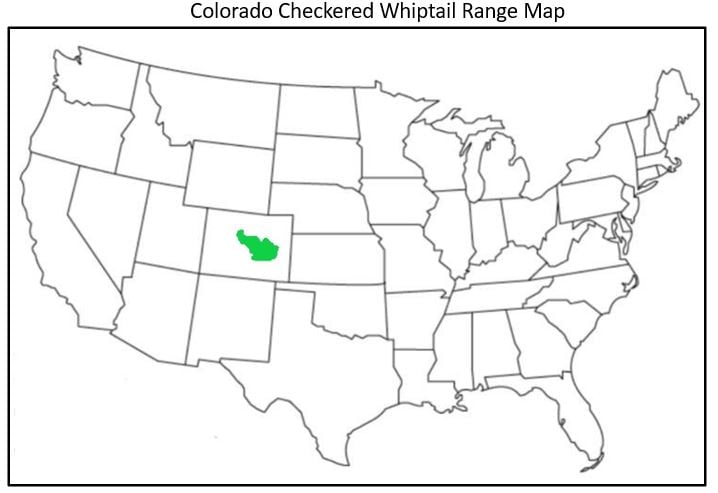 Colorado Checkered Whiptails are, unfortunately, considered extinct in most of their original habitat and now only have small, scattered populations.

Look for New Mexico Whiptail Lizards in the United States in areas with loose, sandy soil and scattered yucca or mesquite trees. 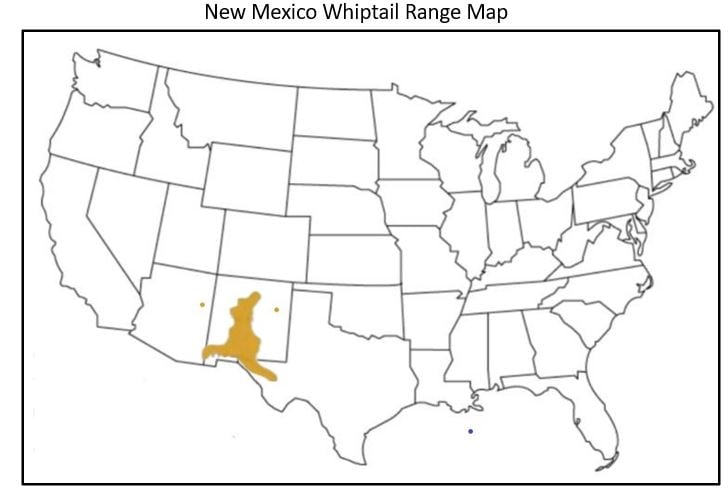 The Orange-Throated Whiptail is the smallest whiptail lizard in the United States! 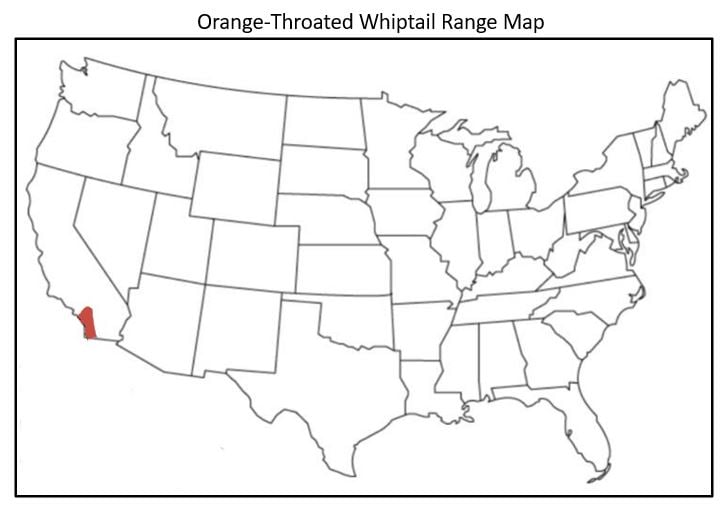 Orange-Throated Whiptail Lizards have the smallest range of all whiptails, and it has been reduced by 75% by residential development. Look for them in southern California in washes, streams, and other sandy areas with light, sparse brush.

Which of these whiptail lizards have you seen in the United States?