Did you see a YELLOW bird in Kansas?

Today, we will review 20 types of birds that are YELLOW in Kansas.

These small yellow birds are prevalent in Kansas.

Unlike most yellow birds in Kansas, Wilson’s Warblers are more comfortable on the ground or the forest understory. As a result, they’re easier to spot without craning your neck! They often nest on the ground, concealed in shrubs at forest edges.

These bright yellow birds are found all over Kansas.

Two subspecies of this warbler exist in Kansas. They are can be distinguished by their throat patch, which is yellow in Audubon’s Warblers and white in Myrtle Warblers.

Yellow-Rumped Warblers are an active species known for catching insects in midair. They visit feeders with sunflower seeds, raisins, suet, and peanut butter during winter. They also eat winter berries.

Yellow-Rumped Warblers often search for food in trees but will venture to the ground to forage in leaf debris, and they’ve even been known to pick through seaweed in coastal areas!

One look at a male Common Yellowthroat will tell you why this species is also called the “Yellow Bandit”! The male has a distinctive black mask that sets it apart from other yellow birds in Kansas.

Evening Grosbeaks are one of the most beautiful yellow birds in Kansas!

Typically, Evening Grosbeaks are found in the northern coniferous forests, and in winter, they can be found pretty much anywhere in Kansas as they search for food.

This species will occasionally show up at feeders in Kansas, far south of their normal winter range, which provides a treat for backyard birders. You can attract them with sunflower seeds placed onto a large platform feeder, allowing ample room for them to land and eat.

Pay close attention to exposed perches on power lines and in trees to spot this yellow bird in Kansas.

Magnolia Warblers have the most distinctive color pattern of any yellow bird in Kansas!

Even though this yellow bird doesn’t visit feeders much in Kansas, it may still visit yards with native plants and a water source during migration. So, if you have a fountain or birdbath with a bubbler, keep an eye out for Northern Parulas!

This species has two striking features that help to distinguish it from other yellow birds in eastern Kansas. The bright whitish eye-rings give this bird a permanently surprised expression, and its “necklace” of black markings helps it stand out among its relatives. These features are most evident in males, and while females have a necklace, it generally isn’t as defined or dark.

The easiest way to identify this yellow bird in Kansas is by its gray or black “hood.”

Instead of using the ground or a low bush, Prothonotary Warblers build nests in unused woodpecker holes or tree cavities. Look for these yellow birds in Kansas in mature forests near densely forested streams. You may catch one foraging on the bank for insects and snails! 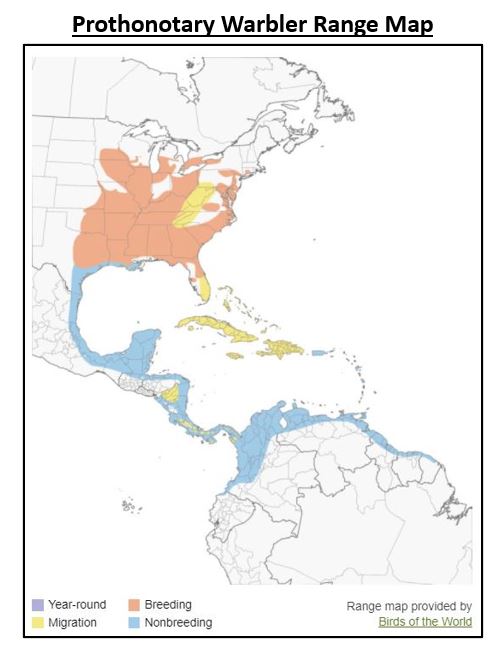 Although they look nearly identical to Eastern Meadowlarks, they rarely cross-breed. Therefore, the easiest way to differentiate these two yellow birds in Kansas is by location. Their ranges seldom overlap, but where they can both be found, Eastern and Western Meadowlarks will fight over territory.

Western Tanagers can be hard to spot because they spend much of their time in the upper canopy of open forests. However, if you see one of these yellow birds in Kansas, you can identify a male by its fiery coloring. The orange-red head, yellow body, and black wings bear a striking resemblance to a burning fire.

Females are more understated, with a greenish-yellow body and gray wings. Although they rarely eat seeds, you may have luck attracting Western Tanagers to your backyard with dried cherries and cut oranges.

Even though their name suggests fields and grassy areas, this yellow bird lives primarily in wooded habitats in southeastern Kansas.

What types of yellow birds in Kansas have you seen?