Are you trying to identify a bird found in Iceland?

This can be an immense challenge because of the sheer number of species. Did you know there have been 418 species recorded here?

As you can imagine, there was no way to include this many birds in the below article. So instead, I tried to focus on the birds that are most regularly seen and observed in gardens, backyards, and feeding stations.

Today, you will learn about 9 COMMON types of birds in Iceland!

This species is the largest pigeon found in Iceland! Look for Common Wood Pigeons in areas with plenty of trees, where they spend most of their time. However, they prefer to nest on flat surfaces like building ledges, rocky outcrops, or even the ground.

The Wood Pigeon is often found in large flocks in rural areas and the city. Their numbers have significantly increased, probably because they can live alongside humans. 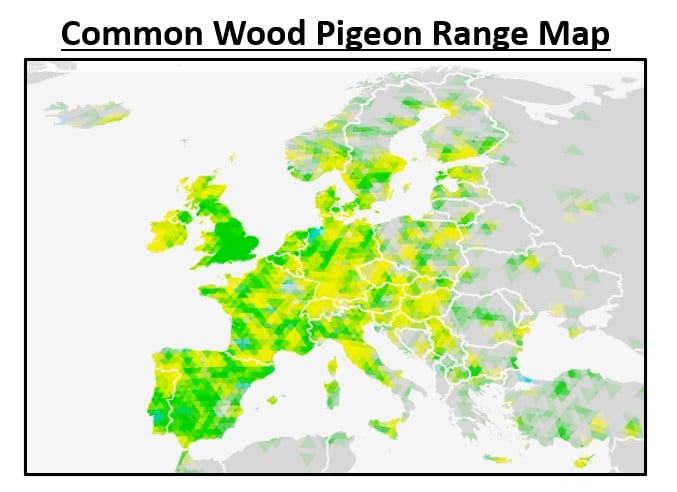 Babies, known as squabs, are fed crop milk until they are old enough to eat seeds. This is a milk-like liquid made in the parents’ throat crops. Typically, a bird’s throat crop is used to store and digest food collected during the day. But, during the nesting season, it does double-duty by producing crop milk for hatchlings!

Listen closely for the sweet, five-note refrain of the Common Wood Pigeon. Its notes create a series that sounds like “wu-huuu-wu-hu-hu.”

The Eurasian or Common Blackbird is one of the most recognizable birds in Iceland. Their preferred territories include gardens, wooded habitats, parks, and farmland with hedges. Look for them on lawns and fields, where they spend most of their time foraging insects and earthworms. 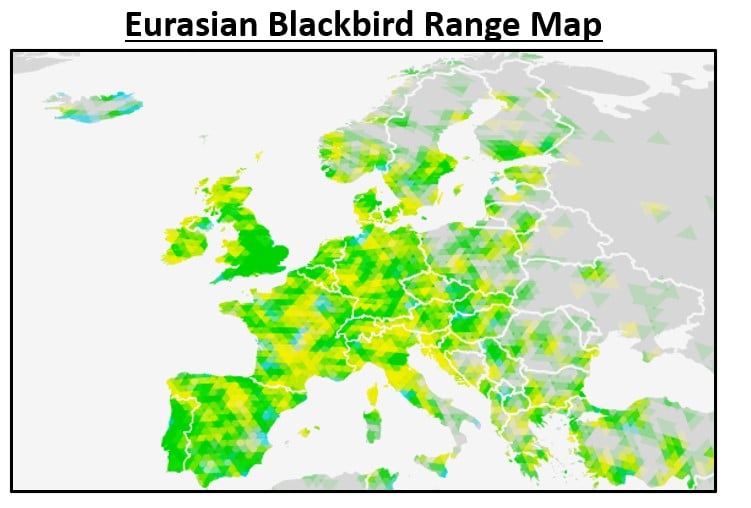 Like many blackbirds, this species is extremely territorial, especially during breeding. Look for squabbles and fights to break out regularly over food, nesting locations, and seemingly nothing at all!

Listen for the Eurasian Blackbird’s multi-toned warbling cry, which is easy to recognize, but harder to describe.

Despite its drab color, the Eurasian Collared Dove is a very interesting bird in Iceland!

This species is native to Iceland but has spread across the globe through a series of unlikely events. First, in the mid-1970s, a pet shop in the Bahamas was robbed, and a few Eurasian Collared Doves were released. Then, not long after, more were set free on the island of Guadaloupe during a volcanic eruption. Then, the birds traveled to North America and spread throughout the continent! 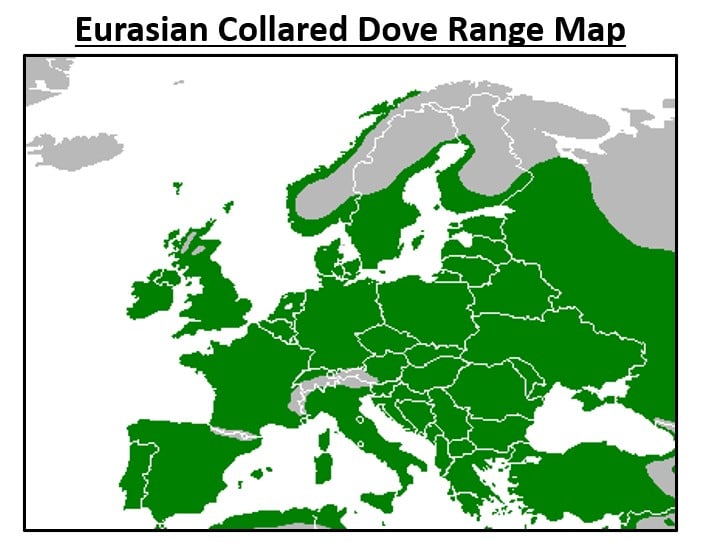 Another truly strange feature of the Eurasian Collared Dove is the way it drinks. Unlike most birds that gather water in their beak and tip their head back to drink, this species uses its beak as a straw! It seems unlikely that this large gray bird could have anything in common with a tiny, flashy hummingbird, but they look similar when drinking water.

One of the easiest ways to recognize this species is to listen for its three-note song, which sounds like “coo-coo-coooo.” They also give a warning screech if they land near another bird as if they’re honking a car horn on arrival.

The Eurasian Siskin is a member of the finch family. Its small, round shape, bright yellow coloring, and cheerful disposition make it a welcome visitor to gardens and backyards. 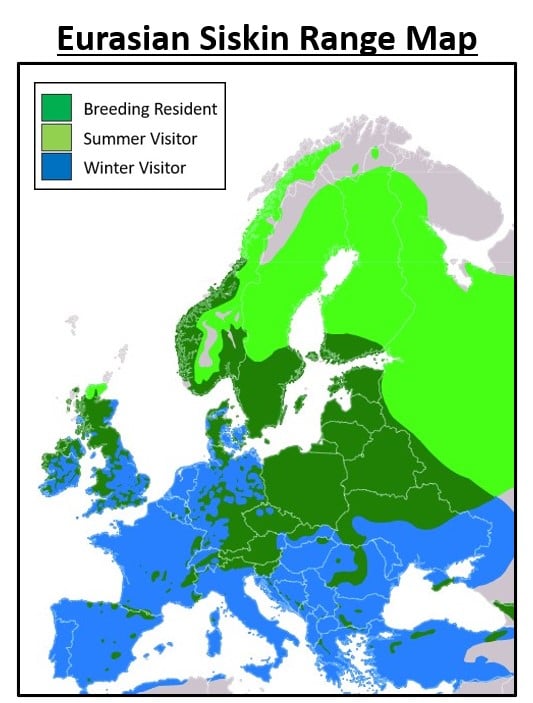 However, this species is less likely than other birds in Iceland to visit feeders. Instead, it prefers seeds from trees such as birch and alder over traditional bird food. Occasionally, the Eurasian Siskin will catch mayflies by hanging upside down and grabbing them out of the air!

To hear the Eurasian Siskin’s song, listen for a high, thin “tee-ee-ee-ee.”

Although it’s tiny, the Eurasian Wren is one of the loudest songbirds in Iceland!

Its clear, loud call sounds like someone saying, “Wren!” That’s the easiest way to recognize this species.

Eurasian Wrens are found throughout Iceland in areas with plenty of places to hide, like thick forests, reed beds, and gardens. They’re primarily insectivores but occasionally eat berries or seeds when insects are scarce. 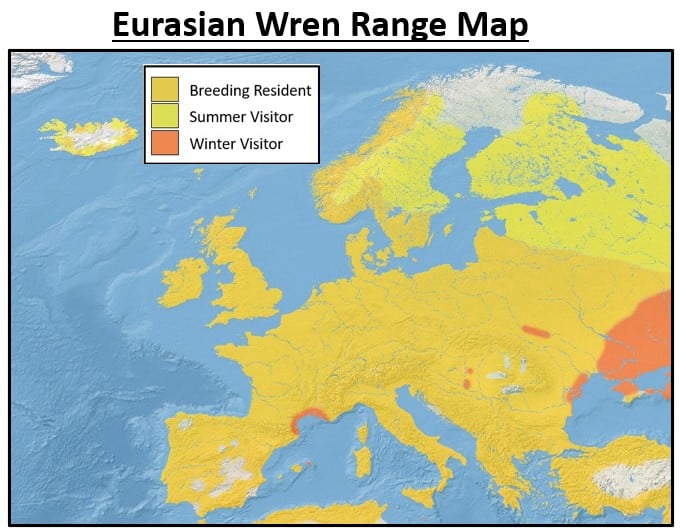 The scientific name of the Eurasian Wren, Troglodytes troglodytes, actually means cave-dweller because it likes to live in small holes.

Robins are one of the most widespread birds in Iceland!

You can find them across many habitats, but they are especially common visitors to backyards and gardens. The Robin is one of Europe’s most charming and popular birds. They have become tame and are a welcome sight in any backyard. Robins are even known to follow gardeners around! 🙂 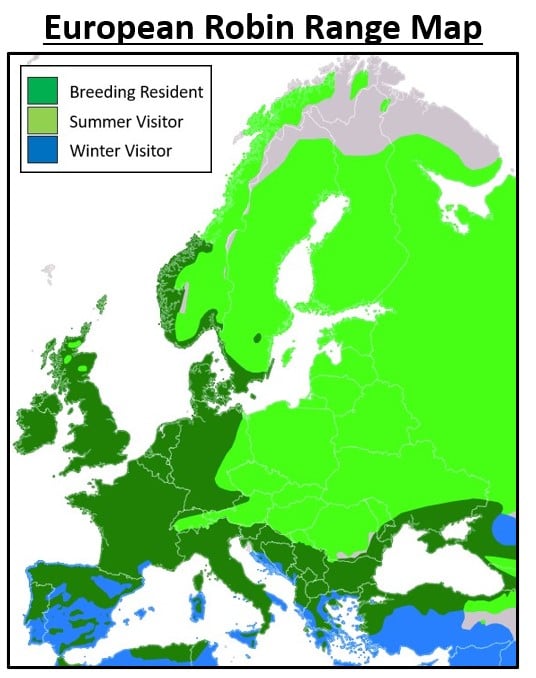 They enjoy eating worms, but they will also eat seeds, other invertebrates and insects, fruit, and nuts. During the winter, they’re attracted to suet, especially if it contains mealworms.

You’re likely to hear European Robins singing at all hours of the day. They’re usually the first to start calling in the morning and the last to stop in the evening. Listen for a sweet, breathy song that turns up in pitch at the end.

European Starlings are considered a “bully” at backyard feeders. They have the unfortunate habit of descending on a bird feeder in large groups, pushing out other birds, and wiping out tons of food in a single sitting.

In North America, where this species is invasive, many smaller birds have difficulty surviving alongside European Starlings. However, birds in Iceland tend to push back more and reclaim their territory against these blackbirds. 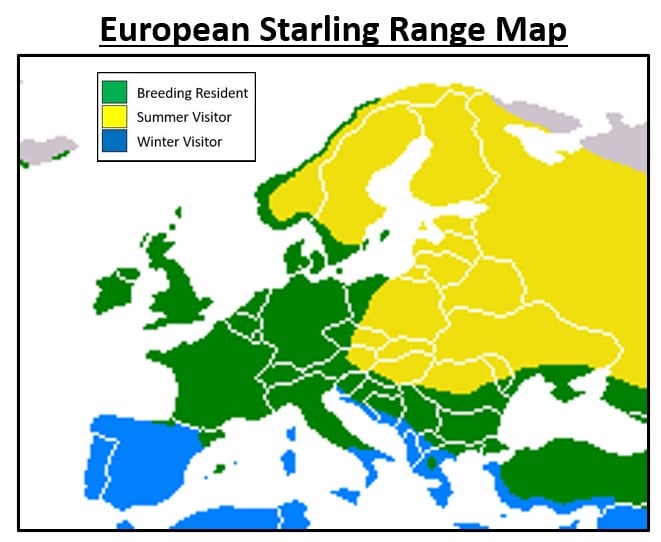 Farmers also have their hands full with starlings flocks since they enjoy eating berries, cherries, and other crop foods. They will even steal feed from livestock like cattle and horses!

European Starlings have a variety of calls, and they even mimic other species. Listen for rattles, trilling, chattering, and whistles. They’re known to imitate over 20 different species, including jays, meadowlarks, and hawks.

House Sparrows are opportunistic birds that live across Iceland.

Although its native numbers in Iceland are declining slightly, it has become invasive across much of the rest of the world, where it thrives with little competition and pushes out many native species. 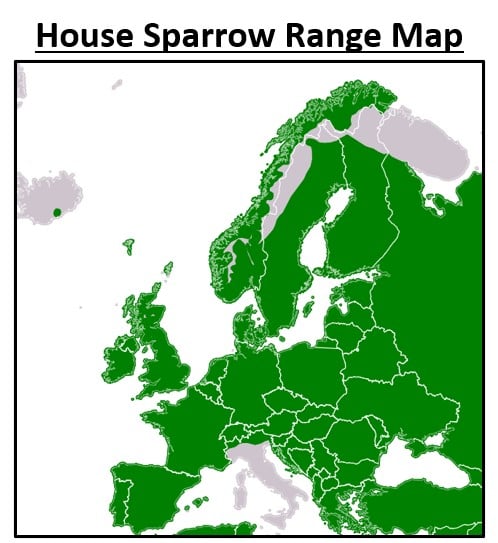 This species is granivorous, meaning they prefer flowers, grasses, and bird seed mixes. Unfortunately, their fearlessness around people and other birds means they can easily take over your feeders. However, by eliminating millet and other grains, you can increase your variety of visitors.

In most urban and suburban areas, it’s INCREDIBLY COMMON to see House Sparrows. They owe their success to their ability to adapt and live near humans. Unlike most other birds, they love grains and are commonly seen eating bread and popcorn at amusement parks, sporting events, etc.

House Sparrows can be heard across the entire planet. Pay attention the next time you’re watching the news in another country. Listen for a simple song that includes lots of “cheep” notes.

Birders in Iceland use the mnemonic “A little bit of bread and no cheese” to describe the song of the Yellowhammer. It’s a sweet, pleasing tune, and with a bit of practice, it’s easily recognizable! 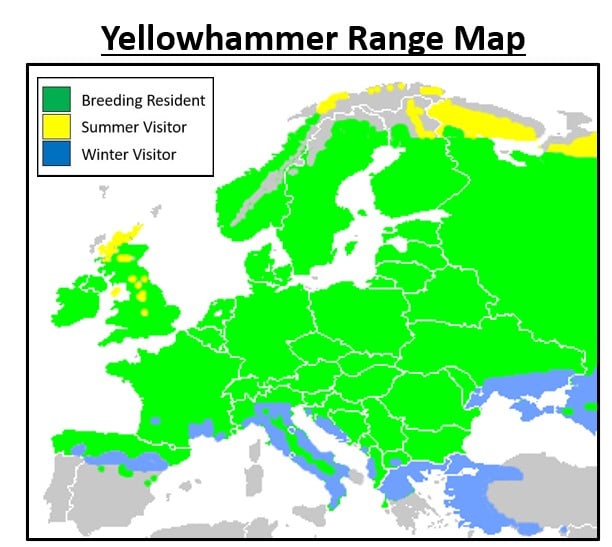 Yellowhammers are granivores, so they focus on gathering seeds and grains. However, during the breeding season, they add insects to their diet, particularly for feeding the young.

Outside the breeding season, Yellowhammers gather in flocks of hundreds of birds, which can include other species like finches or buntings. They sing in choruses while sitting together on low branches.

Birders from North America may confuse the Yellowhammer with a few native species. For example, it looks remarkably similar to the pine warbler.

Do you need help identifying birds of Europe?

These titles will provide you with more information!

Which of these birds in Iceland have you seen before?

Check out these guides to other animals found in Iceland!