Blue Jays are one of the most recognizable birds in North America!

You don’t need to be an expert to identify these colorful, loud, intelligent birds.

But guess what?  There is a lot more to know about Blue Jays than blue feathers and a boisterous personality!

Today, you are going to learn 14 fun facts about Blue Jays!

Before we begin, I wanted to share my LIVE bird feeder cam with you. You may be able to observe a Blue Jay feeding right at this very moment! Their favorite foods at my feeding station are sunflower seeds, peanuts, and corn kernels. *JUST PRESS PLAY.*

You heard me correctly! And trust me, this blew my mind too! Although Blue Jays, are, well…blue, it is just a trick of the light.

For example, a Northern Cardinal is red because its feathers are red pigment. Blue Jays have no such blue pigment. If you crush the wing of a cardinal into a powder, it will be red. If you do the same with a blue jay feather, the powder will be brown.

Blue Jays (and all blue birds!) use a little trick called light scattering. In a very basic nutshell, when visible light strikes the feathers, all of the colors pass through the feather EXCEPT blue. The blue color is reflected, so your eyes will see BLUE.

Don’t believe me?  Test it for yourself. Take a Blue Jay feather, get it wet, and it will turn brown. You’re interfering with the mechanism that reflects light, so you will no longer see blue. 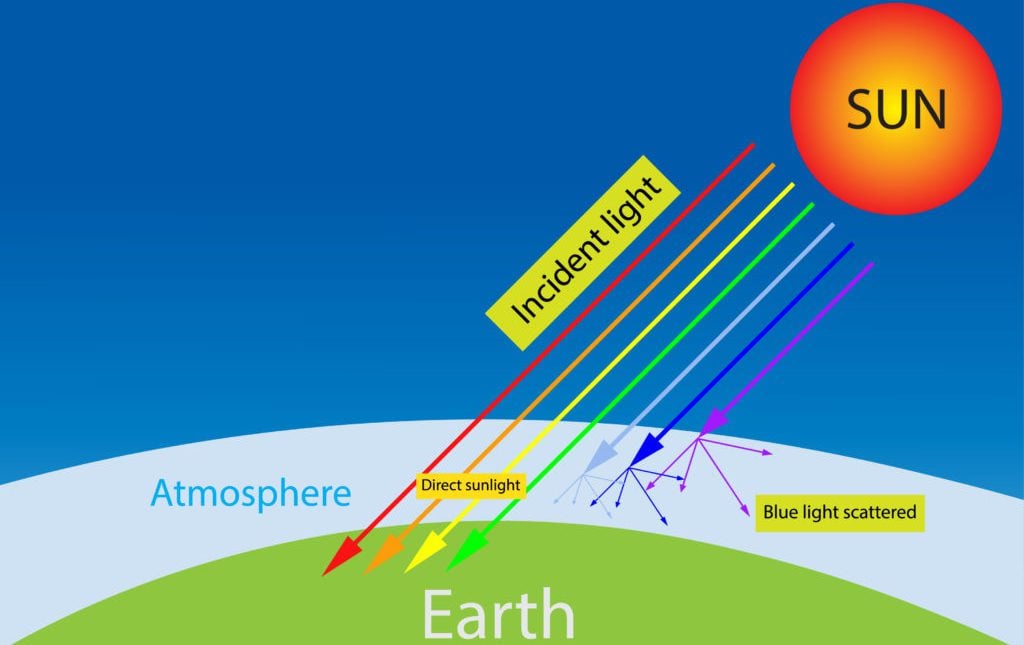 So am I. I never liked Physics class. And to be honest, I’m not sure if the above picture applies to Blue Jay feathers! 🙂

This is pretty rare in the birding world and is called sexual monomorphism. Most species of birds have males and females that look very different from each other, which is referred to as sexual dimorphism.

Regardless, since their plumage is the same, it is challenging to tell sexes apart.

So how will you know?

Second, their mating and courting behaviors give them away. Blue jays are often seen in courtship groups (typically three to ten birds). In these groups, a single female blue jay determines the behavior of the surrounding males. For example, if a female begins to fly, the males follow; when the female lands, the group of males also lands.

Fact #3: They can live a longggg time!

The average age for a wild bird is typically 5-7 years. This number varies wildly based on the individual bird and environment.

However, the oldest known wild Blue Jay was at least 26 years, 11 months old! It was first banded in 1989 in the Newfoundland area and found dead in 2016 in fishing gear in the same range!

However, in recent decades, West Nile Virus has caused several significant local declines. For whatever reason, Blue Jays are one of the most susceptible birds to this disease.

Fact #4: Blue Jays are the official state bird of…

Poor guys. Zero out of Fifty. 🙁

Meanwhile, the Northern Cardinal is hogging up seven states. However, that doesn’t mean that jays get no love! 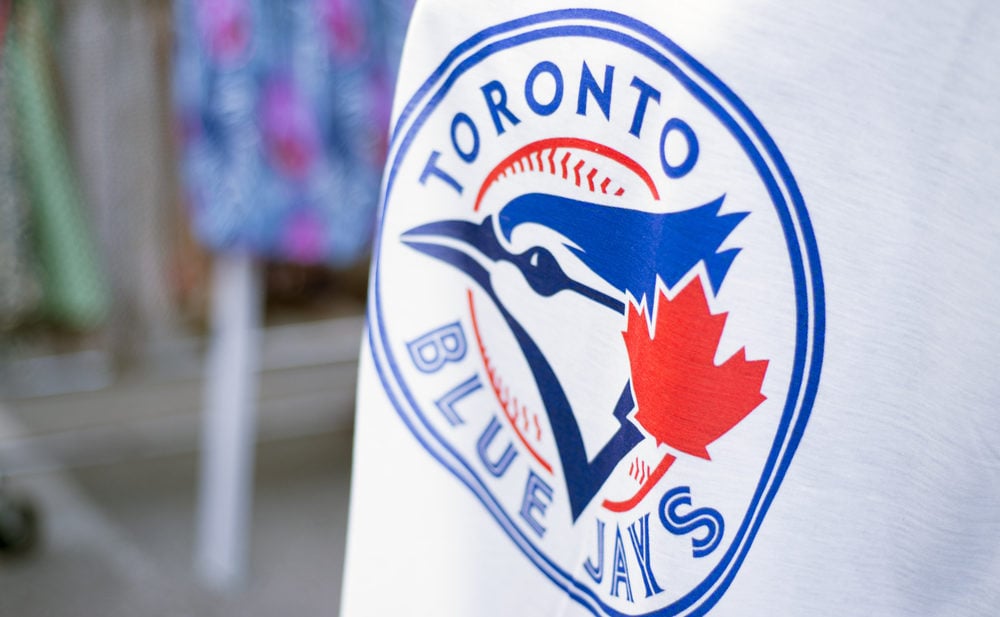 In Canada, they are the provincial bird of Prince Edward Island. Not to mention they are the symbol of the Toronto Blue Jays major league baseball team, along with several other colleges and universities!

Fact #5: They are an alarm system for other birds.

One of the main predators for the Blue Jay (along with other birds) is the Red-Shouldered Hawk. Jays are so smart that they can imitate the sound of hawks when they are spotted! This early alert protects many other birds from becoming lunch!

However, Blue Jays can sometimes use this to their advantage. For example, they will make hawk sounds even when none are present.

The outcome? Other birds fly away, leaving the Blue Jay first in line to eat.

Not a bad idea! This is like yelling “FIRE” in a crowded restaurant and bypassing the wait! However, I am not endorsing or recommending this strategy.

Fact #6: Blue Jays can be bullies.

Some say that Blue Jays have a pack mentality. They are very cooperative with their species, and a group of jays will often drive off other birds that are using “their” feeders.

Some backyard birders dislike them for this behavior. However, I’m not one of them.

The advantage to the pack mentality is that a “band” of jays can drive off a hawk, cat, squirrel, raccoon, or other animals that threaten their habitat when they have enough members present.

The key is to have small feeders that don’t accommodate big birds so finches, sparrows, and others can still have a place for lunch. Separate feeders for bigger birds will make the jays, cardinals, and other large birds feel welcome to visit, too.

Here is my favorite bird feeder for Blue Jays!

Jays like having a large, open space to feed. And this tray feeder can be hung in the air, mounted on a pole, or placed on the ground (as seen below).

Originally, a jay was a talkative, impertinent, chatterbox of a person who tended to dominate conversations. Blue Jays were so named because they tend to be loud, lively, and energetic.

The range of their vocalizations is extensive. Some sounds are delightful, while others can be loud and annoying. Hear some of their common sounds in this video:

However, there’s more to blue jay squawking than meets the ear. The complex vocalizations warn of predators, people, and even alert other Blue Jays to more food!

You would think for being a large, aggressive bird that Blue Jays would fly fast!

Although they seem to fly effortlessly with only the occasional wing flap, they are doing so quite leisurely.

Blue Jays typically fly around 20-25 mph. For reference, ducks can fly 60 mph, and falcons can reach speeds of 200 mph! Due to this, they make easy prey for hawks, owls, and falcons. Blue Jays are typically highly aware of other birds in their vicinity and can explain why they have a hawk alarm system!

I guess elegance can be quite costly. 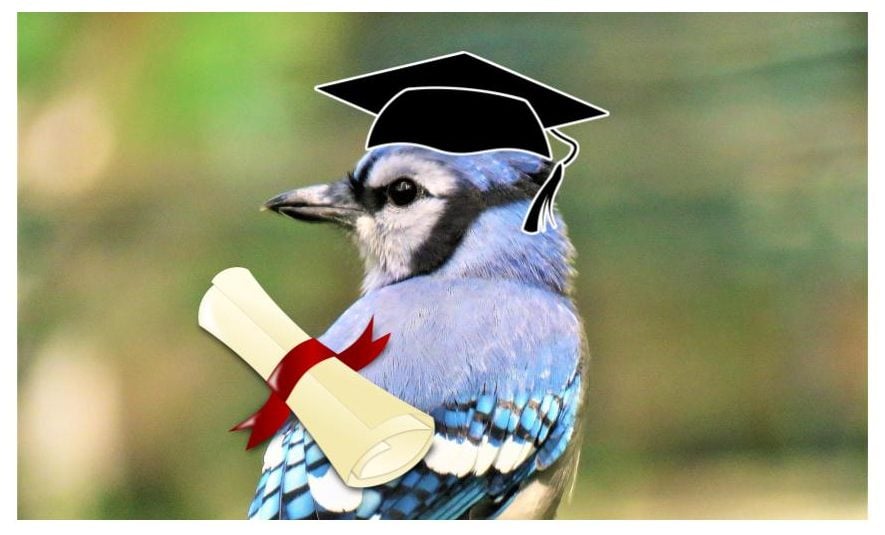 They are a member of the Corvidae family, which includes ravens and crows, and consequentially, they are extremely intelligent. In fact, many scientists consider this Corvid family of birds to be the smartest animals on Earth.

Here are a few examples to demonstrate their brainy behaviors:

So why is that interesting?

Many acorns that are stored are never recovered from where they were buried or hidden. These acorns that are lost have the potential to grow into oak trees and create new forests. Their affection for acorns is credited with helping spread oak trees after the last glacial period! 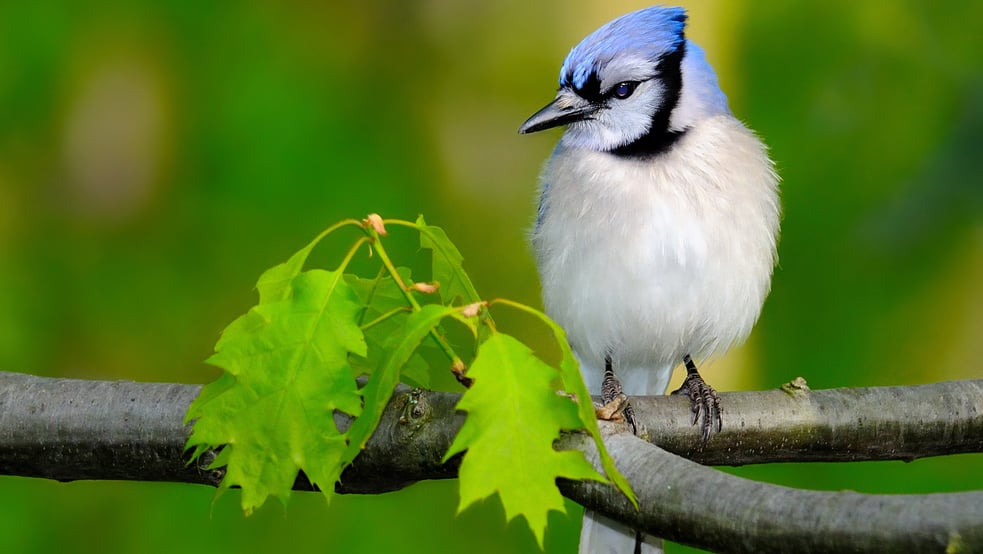 Blue Jays and oak trees have a productive symbiotic relationship with each other. Blue Jays get acorns to eat and in return, help spread and plant more trees to grow!

Blue Jays engage in something called “anting.” This behavior entails spreading their wings, tucking their tail down, and proceeding to crush and rub ants on their feathers before eating them.

Although not a Blue Jay, this bird is demonstrating the same “anting” behavior. Weird, right?

Believe it or not, there is a perfectly reasonable explanation for this behavior. Ants use formic acid as a weapon against predators such as Blue Jays. Formic acid makes ants bitter tasting and birds don’t like that!

When a jay rubs an ant onto its feathers, it is purposely getting the formic acid on itself. The formic acid helps keep away bacteria, fungus, mites, and other small insects.

And as a bonus, once the formic acid is removed, Blue Jays are then able to eat and enjoy the ants. 🙂

Once the female Blue Jay chooses her mate, they typically become monogamous mates for life.

Both male and females build the nest and rear the young. While the female is sitting on her eggs, the male will feed and take care of her!

The tight family bond doesn’t end there. The entire family will leave the nest and travel together once the young are around 17-21 days old.

Unlike other birds, Blue Jays do not have a predictable migration pattern. Blue Jays will often stay in a habitat year-round. Then, out of the blue, they will decide to migrate and head south!

Why stay for years on end and then suddenly pick up and leave for no apparent reason, only to return the next spring? To be honest, no one is 100% sure.

The best explanation for this odd behavior is that it is related to weather conditions and how abundant the winter food sources are in the area.

As we have mentioned, jays are loud, boisterous birds that typically make a big entrance.

So we shouldn’t be surprised that a group of Blue Jays is often referred to as a “party” or a “band”.

Love them or hate them, these birds are survivors, spurred on by their phenomenal intelligence.

They can be loud and they can be bullies, but they are also beautiful creatures that deserve our respect and admiration.

Given the appropriate feeders, food, and preparation, they will make a beautiful addition to your backyard!