Did you see a RED bird in Arizona?

There are 14 birds in Arizona that are considered “red.”

Without a doubt, the Northern Cardinal is one of the most popular and recognizable RED birds in Arizona. They are not only beautifully colored, but they are common to see at bird feeders!

And with a bit of practice, it’s easy to identify Northern Cardinals by their songs and sounds. Interestingly, unlike most other songbirds in Arizona, even females sing.

It’s common to see these red birds in Arizona near people.

American Robins are one of the most familiar red birds in Arizona!

Summer Tanager males are one of the few COMPLETELY red birds in Arizona.

These red birds are one of the largest finches in Arizona!

Look for these beautiful red birds to visit feeders in Arizona, especially during winter. Your best chance to attract them is using black-oil sunflower seeds. Having conifer trees in your yard is also a great way to encourage these finches to visit.

As their name suggests, Red Crossbills have crisscrossed bills, similar to if you cross your fingers. They adapted these oddly shaped bills to help them break into tightly closed cones, giving them an advantage over other red bird species in Arizona.

They’re found in large coniferous forests during their breeding season, mainly spruce, pine, Douglas-fir, hemlock, or larch with recent cone crops. But in winter, they wander wherever they need to go to find food. While not incredibly common, these red birds will sometimes visit bird feeders in Arizona and eat sunflower seeds.

These red birds spend most of their time in Arizona sitting on exposed perches, waiting to catch flying insect prey (hence the name). They fly out in a quick swoop, grab their game, and quickly get back to their same perch to consume. If they catch a grasshopper or a butterfly, they typically smash it against a tree to overpower and soften it before eating.

Typically, you’ll find these red birds in Arizona in pinewood or mixed forests. A forest canopy thick with vegetation is a perfect place for nesting.

One of the most beautiful-looking red birds in Arizona!

You’ll typically see Painted Redstarts in forests by rivers or streams, arid woodlands, and mountains where they forage for prey in branches and leaves.

Though this species is a warbler, it eats more like a woodpecker and a hummingbird! They prefer to forage for insects, but they also like tree sap and sugar water. In the winter, they’re often seen at feeders offering peanut butter or suet.

Look for this unique-looking reddish bird in Arizona!

Pyrrhuloxias (pronounced pir-uh-lok-see-uh) often visit backyard bird feeders. They prefer sunflower seeds from ground feeders or seeds that have fallen on the ground.

This species has an undulating (rollercoaster-like) flying pattern. Males court females by giving a distinct call, fluttering their wings, bowing their heads, and giving her a gift.

You’ll find Red-faced Warblers in canyons and by streams. These red birds like to breed in very high elevations in Arizona.

This warbler prefers coniferous trees but will sometimes stay in deciduous trees. They spend most of their time foraging for insects on the branches of trees and pursue prey in flight.

Males put on a mating display showing their red faces and the white mark on their rump. They’ll continue to do this until they find a mate. What’s unusual is the female responds to the chosen male with a similar display.

In Arizona, you’ll find these red birds in sagamore canyons, oak trees along riversides, edges of vegetation, or pine-oak woodlands.

From their perch, Elegant Trogons sit and wait for their prey. Once spotted, they fly out to catch the insect mid-air! 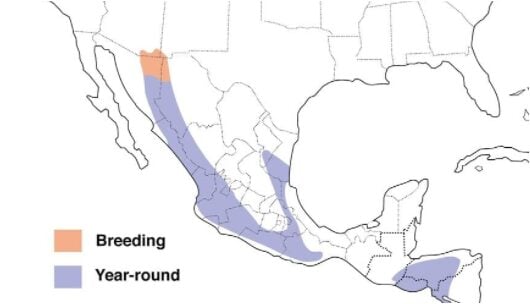 The exciting thing about these red birds is they use old woodpecker holes for nesting. But, unfortunately, they cannot make the hole themselves, so they have been heavily dependent on woodpeckers to reproduce successfully.

The Elegant Trogon has a unique song that is frog-like and is repeated several times. Listen below.

Which of these red birds have you seen before in Arizona?