What kinds of spiders can you find in Madagascar?

Before we begin, I want you to know that the list below is just a fraction of the spiders in Madagascar. Because of the sheer number of these arachnids, it would be impossible to cover them all. For example, some estimates claim over 50,000 kinds of spiders on the planet (and the list is still growing)!

Here are the 10 common SPIDERS that live in Madagascar!

One of the easiest ways to identify these spiders in Madagascar is to look for their egg sacs. They have pointy protrusions and are frequently referred to as “fluffy” or “spiky” in appearance.

The Gray Wall Jumping Spider is native to Madagascar but has since spread throughout the world. It frequently appears on the exterior of buildings or tree trunks in gardens.

Instead of weaving a web around their prey, the Gray Wall Jumping spider stalks the prey before springing on it to attack. Their wide eyes and visual acuity allow them to easily focus on objects and distinguish between different colors. And, using their exceptional jumping ability, they can seize their prey in the blink of an eye.

Interestingly, male Gray Wall Jumping Spiders can produce sounds as part of courtship behavior. The hairs on their femurs and the teeth on the chelicerae (small claws on the front of the mouth) make clicking noises that attract females. These sounds are too low and quiet for humans to hear, but it isn’t hard to imagine the creepy noise!

These spiders can be hard to find in Madagascar because they are nocturnal, which keeps them hidden from predators throughout the day. However, they spend most of the night capturing prey, including moths and flies.

The Banded Garden Spider builds an enormous web, typically around 60 cm (23.6 in) in diameter. The web itself is sticky and strong, able to hold very large insects like wasps and grasshoppers. One interesting feature of their webs is the so-called “stabilimentum,” a vertical zigzag pattern made from dense silk. Researchers think this feature is a way to attract insects that the Banded Garden spider eats.

These spiders rarely bite humans in Madagascar and are not aggressive. If disturbed, they may drop from the center of their web. They may bite in defense if handled and bothered, but it’s unlikely that the bite would cause more discomfort than a bee sting.

The Adanson’s House Jumper lives in warm climates all over Madagascar. Its natural habitats include woodland and low vegetation, but since they are highly adaptable, they can be found in any terrestrial area.

Unlike other spiders in Madagascar, this species is most commonly seen during winter.

The Shorthorn Kitespider is mostly found in evergreen forests, woodlands, or shrubby gardens. They use trees to build their webs at least one meter above the ground. 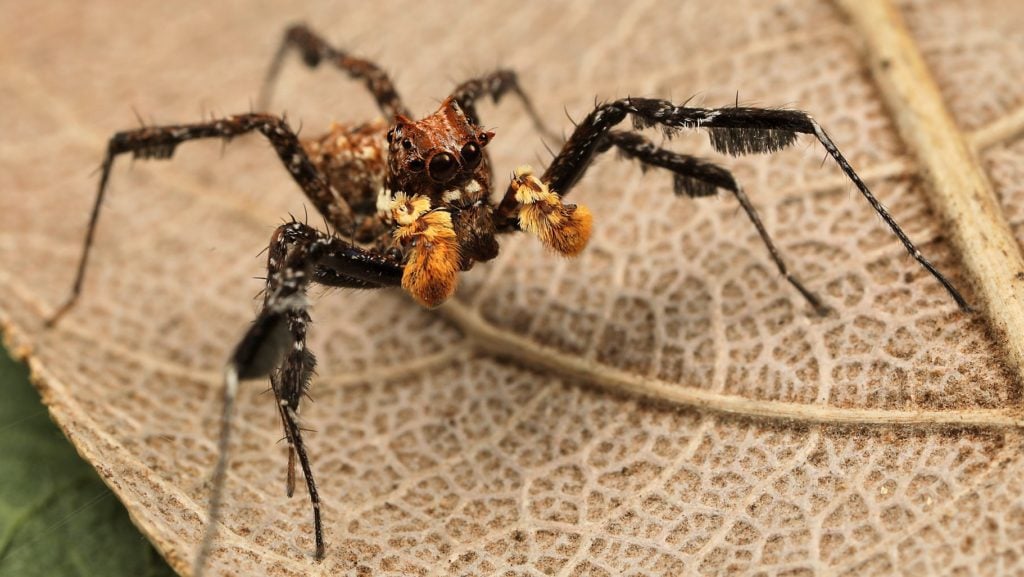 This spider is most active during the day in Madagascar.

Because of their small eyes, Longleg Dandy spiders have poor night vision, which makes them vulnerable to predators such as birds, mantises, and frogs. So, they spend the night in the safety of their webs and forage when the sun is up.

The Longleg Dandy usually catches prey by jumping on it, but females sometimes create webs to catch food. The “capture webs” are funnel-shaped and wide at the top. They even attach their webs to existing webs of other spiders to lure them in! When they catch big prey, the Longleg Dandy spiders release a powerful venom that paralyzes their prey.

The Redleg Orbweaver is also known as the Red-legged Golden Orb-weaver Spider and Red-legged Nephila Spider.

Redleg Orbweavers make large, asymmetric webs reaching up to 1.5m (5 ft) in diameter! Once their web is built, they become a permanent resident, never leaving it again.

Instead of building a new web like some other orb-weavers, they rebuild and fix the parts that need reinforcement. Redleg Orbweavers eat the part of the web that needs to be repaired and then replace it with new silk. Their webs are so strong that even bats and birds can get stuck in them!

This colonizing species is known for forming huge groups and joining webs to cover as much area as possible, increasing prey quantity. Mosquitoes, moths, flies, beetles, and wasps make up most of the Redleg Orbweaver’s diet.

Bark Spiders are a genus of orb-weaving spiders in Madagascar, most commonly found in tropical climates.

Unlike many spiders in Madagascar, Pantropical Jumping Spiders do not construct a web. Instead, they construct silken retreats, often in the corner of a ceiling or other elevated position. They use this retreat to rest and hide between hunting.

Check out these other guides about animals found in Madagascar!

Which of these spiders have you seen before in Madagascar?